A female Golden Orb Weaver Spider was spotted chilling near a carpark gantry at Blk 410 in Yishun Ring Road.

The person who spotted it was one Rafiq Mrbn, who said that he had never seen the spider before.

Rafiq subsequently turned to Facebook to request for more information about the spider with his photos.

Other users were quick to correctly identify the spider in his post.

Others took the opportunity to share their sightings. Among these responses, the Golden Orb Spiders were most commonly spotted at Pulau Tekong.

But they can also be found in Pulau Ubin. 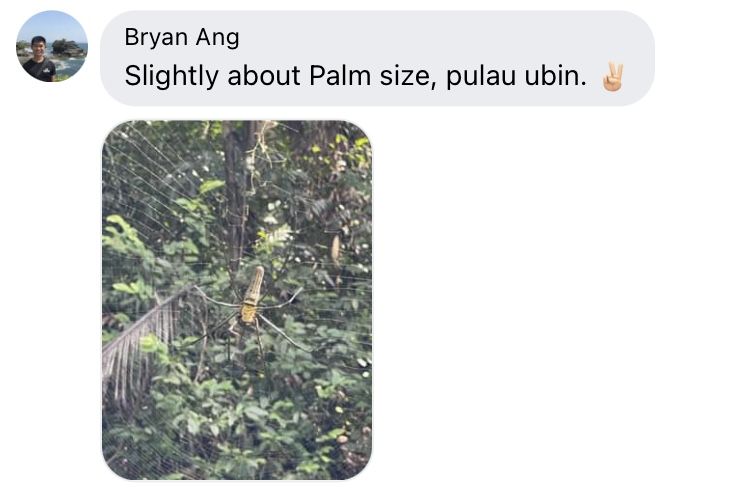 One netizen even said that he "screamed like a little girl" during his encounter.

Golden Orb Spider (Nephila pilipes) is the second most commonly found species of arachnids, or spiders, in Singapore.

It is most usually found in green spaces like gardens and forests, as you may have been able to tell from the netizens' sightings.

In the post, you can also see that the female golden orb has parked itself right beside a bush.

Like the other spiders from their Nephilidae family, female gigantism is extremely pronounced for Golden Orb spiders.

Female golden orb spiders can grow up to 20cm in length, unlike their male counterparts that are four to 10 times smaller. Their size difference is pretty huge as seen from this comment: Golden orb spiders get their name from the yellow hued webs that can span up to 1.5m in diameter.

The silk used to built the web is so strong that it has been compared to Kevlar, a synthetic material strong enough to stop bullets and knives.

There have been instances where even small birds and bats are ensnared by the web.

What to do when you encounter one

Golden orb spiders have no venom, but their stings can hurt.

Maintain a safe distance if met with one, keep calm, and carry on.