In this latest episode of "Singapore Wildin' Again", a snake was seen in broad daylight in Yishun Park coiled around a lizard in preparation to consume it as part of its hearty lunch.

A video of the feast of a reptile by another reptile was put up on the Singapore Wildlife Sightings Facebook group on March 9.

The snake has been identified as a Chrysopelea paradisi or paradise tree snake.

The creature the snake was preying on appeared to be a skink, which is a lizard that has no pronounced neck and relatively small legs.

The caption for the video read: "In Yishun Park right now. However some crazy uncle just beat the snake and rescued the lizard!"

In the comments section of the video, a video of a middle-aged man using what appears to be a stick to break up the snake and lizard.

A voiceover could be heard asking what is going on: "Now the uncle comes, so many kids about, now he is hitting the f**king snake. Look at him. Now he rescue the lizard. What's wrong with him?"

Commenters on the post reacted by asking if the man should have done what he did, as it interfered with nature. Other comments mentioned that if the man had intervened when a python was coiled around a cat, he would have been praised. 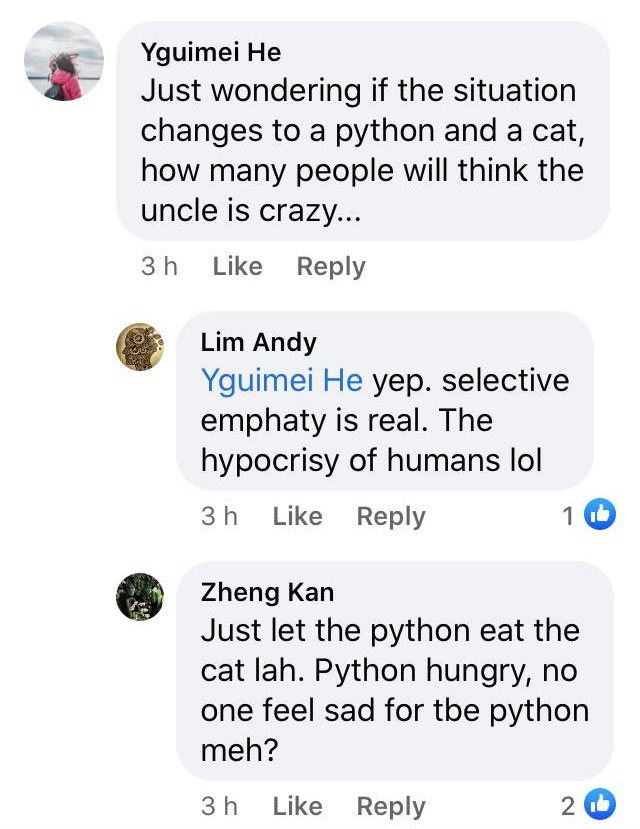