A man recently used his entire body to block another driver from reversing into a parking space at Whampoa Market.

According to dashboard camera footage uploaded to SG Road Vigilante, a driver can be seen waiting for a parking space.

Eventually, a space is freed up.

A Nissan vehicle is seen driving ahead of the car waiting for the space, with the driver of that vehicle getting out.

Before the car can reverse into the parking space, the Nissan driver plants himself right smack in the middle of the space.

He is seen waving as the car reverses, presumably trying to tell the driver that this space is already taken.

The incident happened on March 20, at around 2pm.

It is unclear what took place after the clip ended.

This video triggered responses online saying that such behaviour is "selfish". 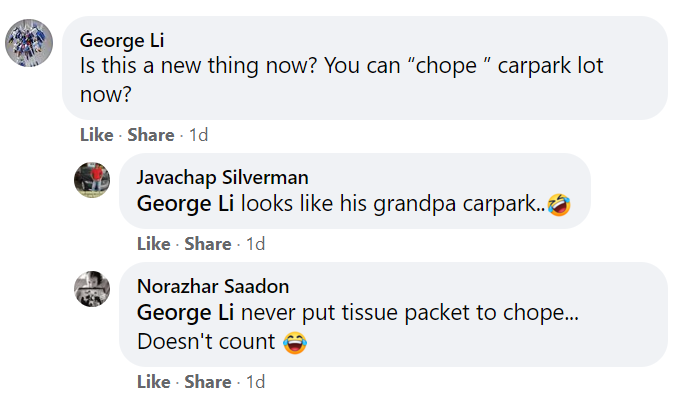 Some also pointed out that the car that was waiting had arrived first, and carpark spaces should obviously be "first come first serve".

Can anything be done about such behaviour?

According to an LTA spokesman who spoke to Stomp in 2017 about drivers reserving parking spaces for their own use:

"Under Section 32A of the Street Works Act, LTA is empowered to enforce against any person(s) for placing articles or things on public streets and five-footways, which may cause obstruction and/or inconvenience to the passage of the public."