In the 1950s, a huge mob of University of Michigan students set across their campus in Ann Arbor, U.S., heading towards the women's residences.

When one of the groups descended upon Alice Lloyd Hall, they barged right in through the side doors, given that the female residents had locked the front doors.

The male undergraduates raced into the rooms and seized what was reported as "miscellaneous female unmentionables", according to one article.  (Another report had said that "items of lingerie" were taken as "souvenirs".)

This incident gained sizeable press attention at a time where universities had regulations against having members of the opposite sex enter dormitories, let alone forcibly entering premises and helping themselves to other people's underwear.

It was also believed to have set off a trend of similar practices across U.S. universities that would continue throughout the next decade or so.

What was happening in Singapore

Over 15,000km away in Singapore, this chaotic U.S. varsity tradition found its way onto local newspapers.

A couple of articles in local media back then reported on similar panty raids in the U.S., including incidents at the University of North Carolina, Tulane University and University of California.

But the extent of its influence in Singapore appears to go beyond just reporting off U.S. events.

A dive into our newspaper archives reveals that panty raids later took place in local universities in the late 1950s, coinciding with the wave of similar raids in the U.S. during that time period.

Early beginnings from the 1950s

A newspaper report from 1958 reported that girls from Eusoff College, University of Malaya, lodged complaints of missing underwear. 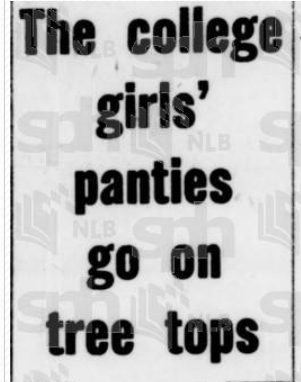 The pieces of clothing were later found to hanging from tree tops, lamp posts and telephone lines within the Bukit Timah campus.

A day later, The Straits Times (ST) reported that the possibility of break-in into the hostels was ruled out.

The girls living in the halls also reportedly believed that there was a "traitor" among them, who would deliver the underwear to people outside.

At that time, the general secretary of the university's Students' Union called it an "academic prank", saying that it's "nothing unusual".

This practice surfaced again in headlines in the 1960s and 1970s.

A series of tweets by one Dhevarajan Devadas recently called attention to two incidents in 1967 and 1972 involving college students who raided the female college, stole underwear and then strung them up on a flagpole.

Unlike ragging, which is most often associated with the freshman orientation, there does not seem to be a clear event or time of year tagged to such raids.

Male students from the University of Singapore (now NUS) used to have a tradition of "raiding" the female Eusoff College & stealing panties as trophies to string on flagpoles. In 1967 & 1972, these raids made headlines.
HT: @liangkaixin https://t.co/tRSvyN4KjA pic.twitter.com/iQlPqtJOgt

In 1967, a raid had occurred in Eusoff College, where 75 undergraduates raided the girls' hostel. A total of 70 were reportedly from outside the republic, and five were Singapore students.

The raid, which was described to be "one of the worst ever in recent years", saw doors and windows being smashed, with walls being covered with "pornographic words".

Lee said that there was "nothing funny about the raid". In fact, he added that he would have been ashamed if his son took part in such incidents.

"And if my daughter lived in the hostel where these things happened, I would be very angry indeed," he added. 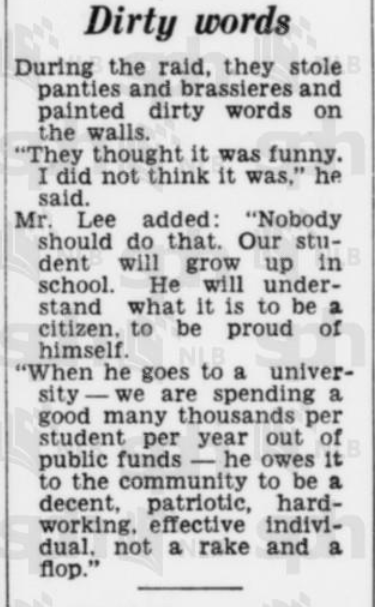 “When he goes to a university – we are spending a good many thousands per student per year out of public funds – he owes it to the community to be a decent, patriotic, hardworking, effective individual. Not a rake and a flop.”

The penalties for such behaviour?

It was subsequently reported that 70 undergraduates, many from the medical faculty, were suspended from the hostels for three months.

1972: Stringing undergarments from a flagpole

Given the severity of the 1967 incident, with even the then prime minister coming out to say something, one might be surprised to learn that that was hardly the end of it.

Reports in 1972 mentioned yet another huge incident at Eusoff College.

This time, the undergraduates had showed off their "spoils", involving a dozen pair of panties and bras strung from a flagpole in front of Raffles Hall, where the male undergraduates resided.

The photo was captured in an ST article:

The girls from Eusoff College said they had no idea when or how their male counterparts sneaked in, but surmised that it could be while they were all asleep.

Claiming that such an event happens "at least once a year", they also said that they are prepared to "accept it without fuss" insofar as they are "not disturbed".

A university spokesperson quoted by ST later condemned the practice, saying that they "frown on such behaviour".

She also refuted the student's claims on the raid's frequency, claiming that the last raid of such nature took place "four years ago", likely sometime in 1968.

A Raffles College resident also wrote into the paper saying that such traditions should not be encouraged. However, he said that they are understandable given the "life of a resident undergraduate".

Citing the mounting stress from the annual exams and being deprived of the comforts of family life, the student said that such a raid was "merely an outlet for pent-up emotions".

Eventually, in February 1972, it was reported that action has been taken against some male university students. The school, however, declined to give further details, but said that "appropriate action... has been taken".

The matter was declared closed.

Trouble throughout the years

But by the 1970s however, the media was completely seized by how the university was tackling ragging incidents — another controversial issue that would surface now and then in old newspaper headlines on university life.

Following reports of serious ragging incidents in Malaysian universities, it was reported in 1989 that no complaints were formally lodged on ragging or any form of harassment during orientation in the National University of Singapore (NUS).

NUS seniors also told the paper that "ragging now is nothing compared to the old days when many were given the 'royal flush' treatment — dumping one's head into a toilet bowl".

When did the panty raids cease altogether?

The school made clear their official position to prevent the mistreatment and humiliation of students: In 1991, NUS issued guidelines against the practice of ragging.

The extent of ragging in university life , as well as its evolution (and improvement) throughout the years, can be seen from the University of Malaya (from the 1950s) to NUS (1980s).

When it comes to panty raids, however, it is more unclear when this tradition persisted until as further newspaper reports regarding such events did not materialise.

What is relatively clear is that such incidents quietly took place at least until the early 1980s or so, perhaps on a smaller scale.

A Business Times article written by a graduate published in 1988 involved him recounting his experience taking part in a "daring panty raid" at 21, saying they were "entitled to the schizophrenia of youth and adult".

His undergraduate years would likely have been in the early 1980s.

Somewhere along the way, the panty raid tradition must have vanished altogether -- perhaps when future generations of undergraduates came to a consensus that such behaviour was unacceptable?

But nobody knows exactly when, why or how it stopped.