A short clip showing an intense showdown between a toad and an equatorial spitting cobra was uploaded onto Facebook recently.

Both creatures froze in their respective spots in the middle of a park connector on Mar. 14, according to one Dex Ong who later uploaded the video to Singapore Wildlife Sighting Facebook.

The toad, likely an Asian Common Toad, stood in a circle painted on the ground in a park connector near Lower Peirce Reservoir.

For at least 10 seconds, the toad remained stationary in the circle, unflinching under the intense gaze of the predator.

The toad subsequently crawled out of the circle, keeping a somewhat comfortable distance from the cobra and itself. That's when the video ends.

The video did not show the outcome of this showdown but the toad could have escaped from becoming the cobra's snack, Ong revealed in the comment section.

The fact that the toad did not scamper off when the predator was just around the corner surprised and baffled some viewers on Facebook.

Some quipped that it had to do with the yellow circle where the toad stood within: 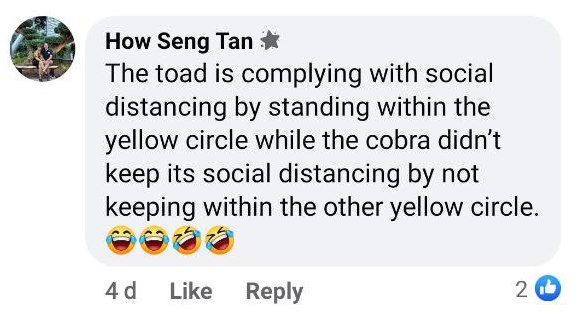 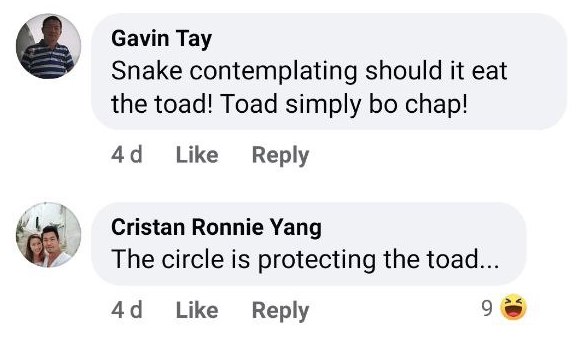 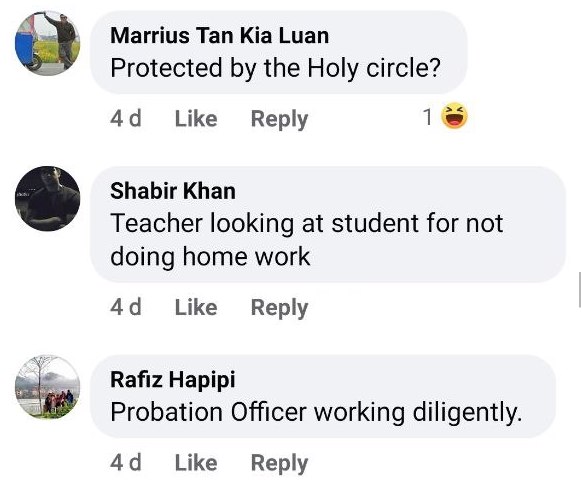 Sightings of the native equatorial spitting cobra are uncommon.

While it's a highly venomous snake, the snake typically prefers to avoid confrontation and is not considered to be aggressive.

When threatened, it will expand its hood and hiss loudly to warn perceived aggressors to back off.

If that does not cause the perceived threat to move away from its sight, it will then spit venom into the eyes of the aggressor in defence.

The venom can cause permanent damage to eye tissues if it is not washed off immediately.

If you spot snakes in unsuitable locations, do call the Acres 24-Hour Wildlife Rescue Hotline at 9783 7782.