Rhabdomyolysis is a condition where muscles are injured or overworked and start to break down, releasing harmful concentrations of proteins into the bloodstream.

Its symptoms include weakness and muscle soreness, which means it can be mistaken for a seemingly straightforward case of over-exertion, and thus, often goes undiagnosed.

However, it may ultimately lead to kidney failure and even death.

Rhabdomyolysis can happen to those who over-exert themselves during workouts, and is "usually seen in marathoners and military personnel", according to a Singapore Medical Journal article.

However, two women were diagnosed with the syndrome after attending their spin classes for the first time in January 2021.

One of the women explained that the atmosphere of the class — its dim lights and pumping music — made it all too easy to get carried away.

The other said that the nature of the exercise, involving participants being "locked into the bike" with special cycling shoes, made it difficult to tell if she was past her limit.

Neither of the two women had gone through a tutorial or introduction prior to the class, and had unknowingly under-estimated the intensity of the workout that they had signed up for, and spent days in pain before seeking medical attention over discolouration in their urine.

This discolouration, due to their bodies trying to clear the by-products of dying muscle tissue — provided the clearest sign that something was wrong.

Spin class instructors took to Instagram to publicly respond to the news.

A number of the instructors acknowledged the fact that rhabdomyolysis cases were not unheard of among the spin community here.

Tiong Jia En, an instructor at Absolute Cycle, wrote on Instagram: "I have taught spin for years now and yes, this happens... It happens usually in a spin class or cross fit class where muscles are overworked."

Cases of rhabdomyolysis are apparently on the rise, said Kenny Ng, who teaches spin classes at CruCycle. "I've been hearing more cases of this and sadly this isn't something new," he wrote on Instagram stories.

Here's a summary of the advice they gave their followers, on how to avoid the potentially-fatal condition:

A point that was echoed by many of the instructors was that those who are new to spin, and those who have not been exercising regularly should attend a beginner's class, said the instructors.

Even those who had done RPM (a form of indoor cycling) and were trying spin for the first time should avoid attending a "normal class", as the two workouts were not the same, said Tiong

Tiffany Tallon, also an Absolute Cycle instructor, echoed the sentiments, adding that those with road cycling experience should attend a beginner spin class to start from the "fundamentals".

The instructors' posts also provided more insight into why such caution was necessary.

Also, the perceived level of exhaustion in spin classes is "generally lower" since participants did not carry their own body weight while exercising, wrote Charlene, an instructor at spin studio Revolution, adding:

"Just cuz some body weight is being removed doesn't mean your legs and heart are slacking!!"

Grace Lin, an instructor at Absolute Cycle, explained that attending a beginner class was "not just about knowing how to set up your bike, but how to ride with proper form and understand your own limits."

And while starting off in a beginner class may seem to slow down progress for some, it was important to "be patient with your body to get to your desired goal," wrote Ng.

Lily Cao, a part-time Spin Instructor at CruCycle, reposted Ng's stories, adding that even fit participants with "lots of previous workout experience" should take precautions when attempting spin for the first time.

Riders should "never push yourself beyond your breaking point," said Cao.

Lin said that instructors would "NEVER make you do anything you're not comfortable with," since participants have different fitness backgrounds.

It is important to "listen to your body and not be pressured to 'keep up'," wrote Ng, who also emphasised that spin classes "should not be made to exhaust riders out to the point of maximum physical exertion," but should instead be "realistically challenging yet enjoyable".

However, she added that there were also "less exciting parts" where riders go more slowly and focus on technique instead. With that in mind, Tan wrote:

"If something does not feel right, please don't ever feel like you have to "suck it up" because everyone else seems to be nailing a routine."

"There is no shame in staying in the saddle when your body feels like it needs a break in the middle of the class," wrote Lin, adding:

"Faster, crazier, and longer doesn't mean it's [a] better class."

3. Stay hydrated, rest and stretch after

Proper hydration, rest, and stretching were just as important as the precautions taken during the spin class itself, wrote Charlene.

Riders should continue to hydrate even after leaving the class, she added.

Ng emphasised that it was important to rehydrate within the first hour after class.

He also wrote that riders should not skip the "cool down" time at the end of the class, which is catered for them to stretch before leaving.

4. Don't spin on an empty stomach

Tallon wrote, "don't spin on an empty stomach!", naming it as one item on a list of "little things" that play a part in staying safe.

Her list also included listening to one's body, resting when needed, and proper hydration, echoing the advice of the other instructors.

Posts and stories in full

You can see their posts/stories in full here: 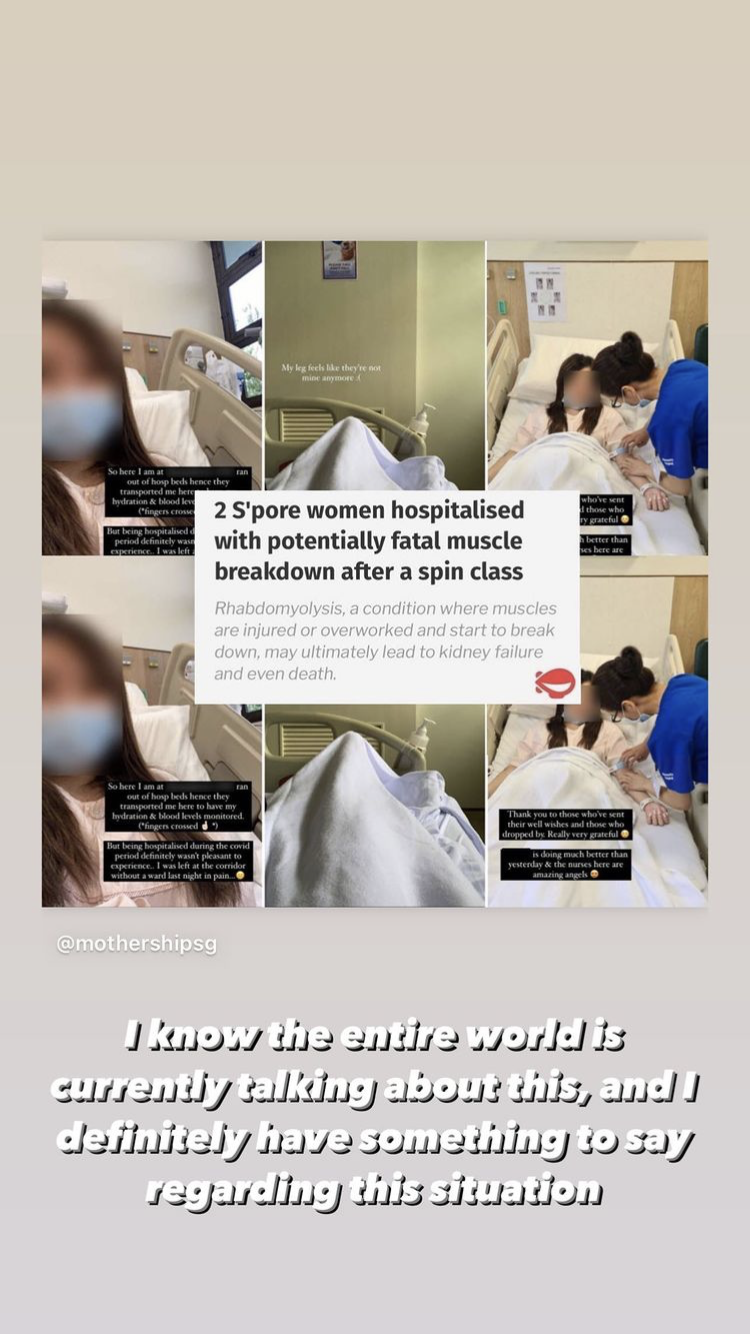 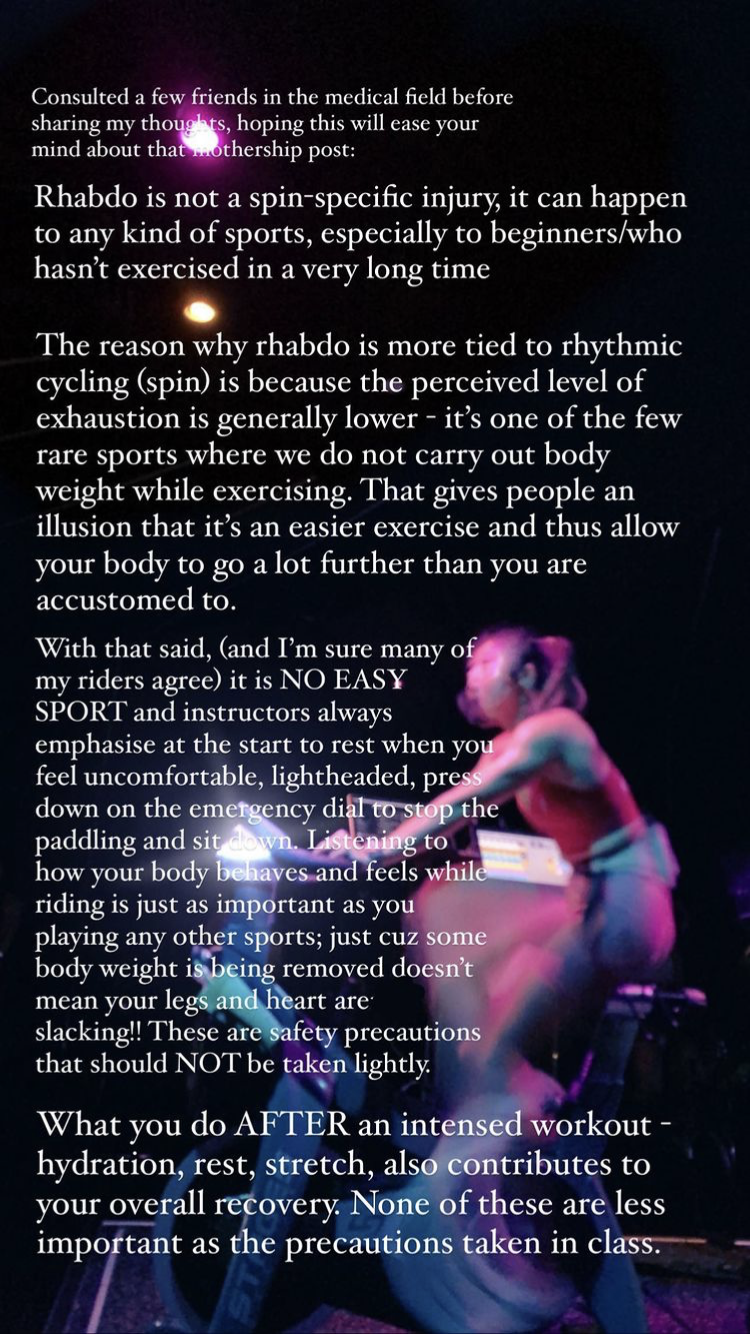 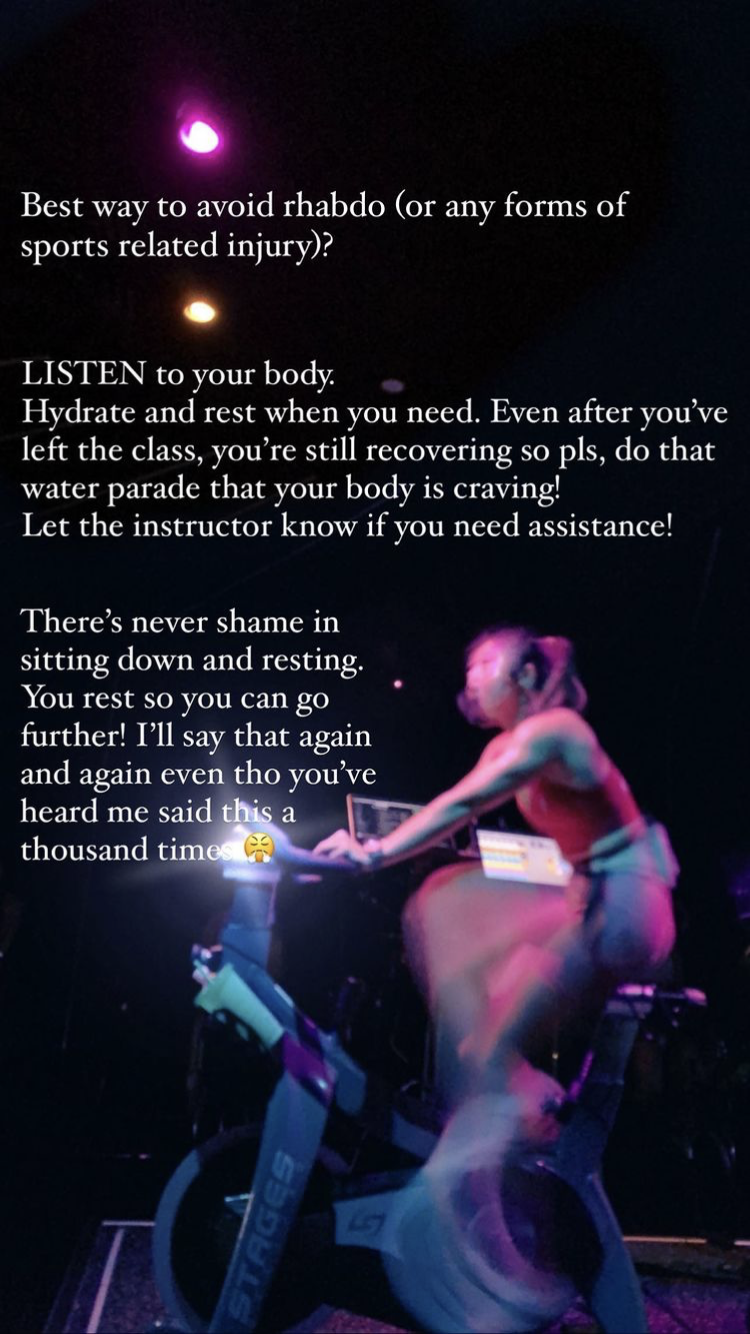 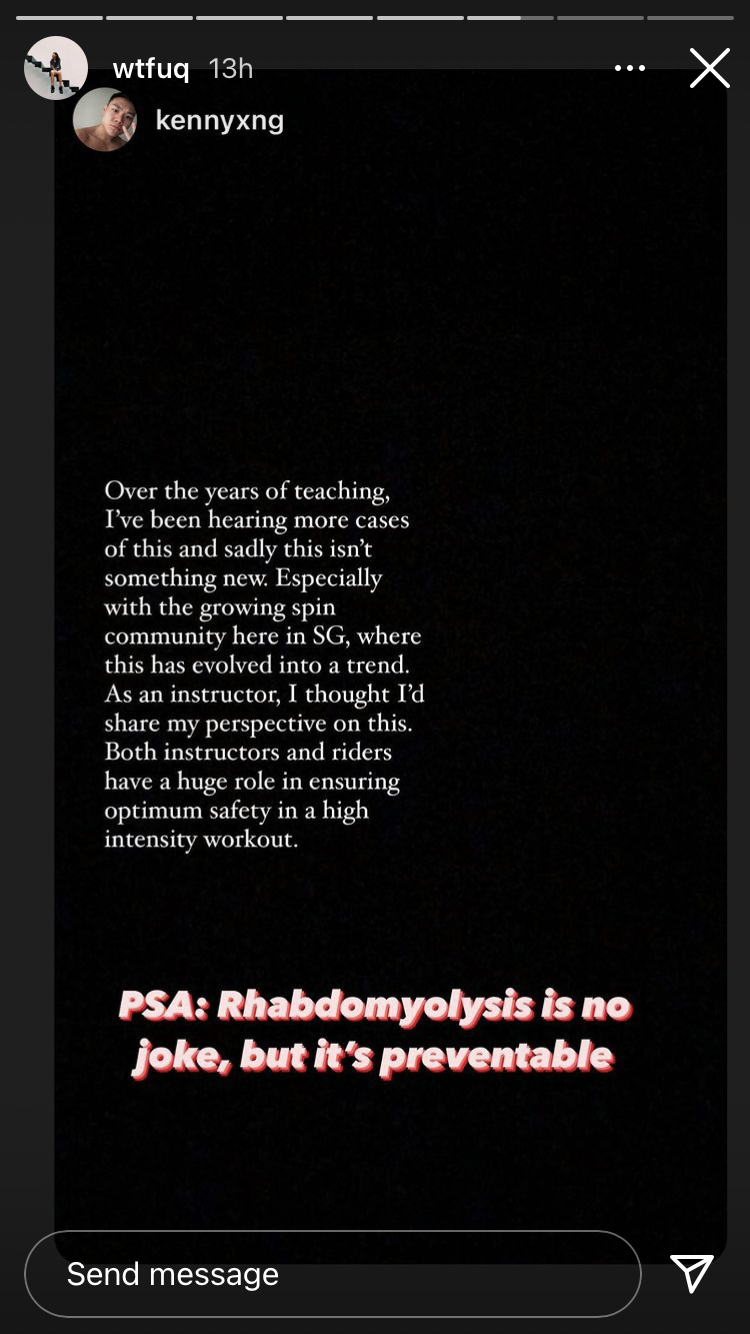 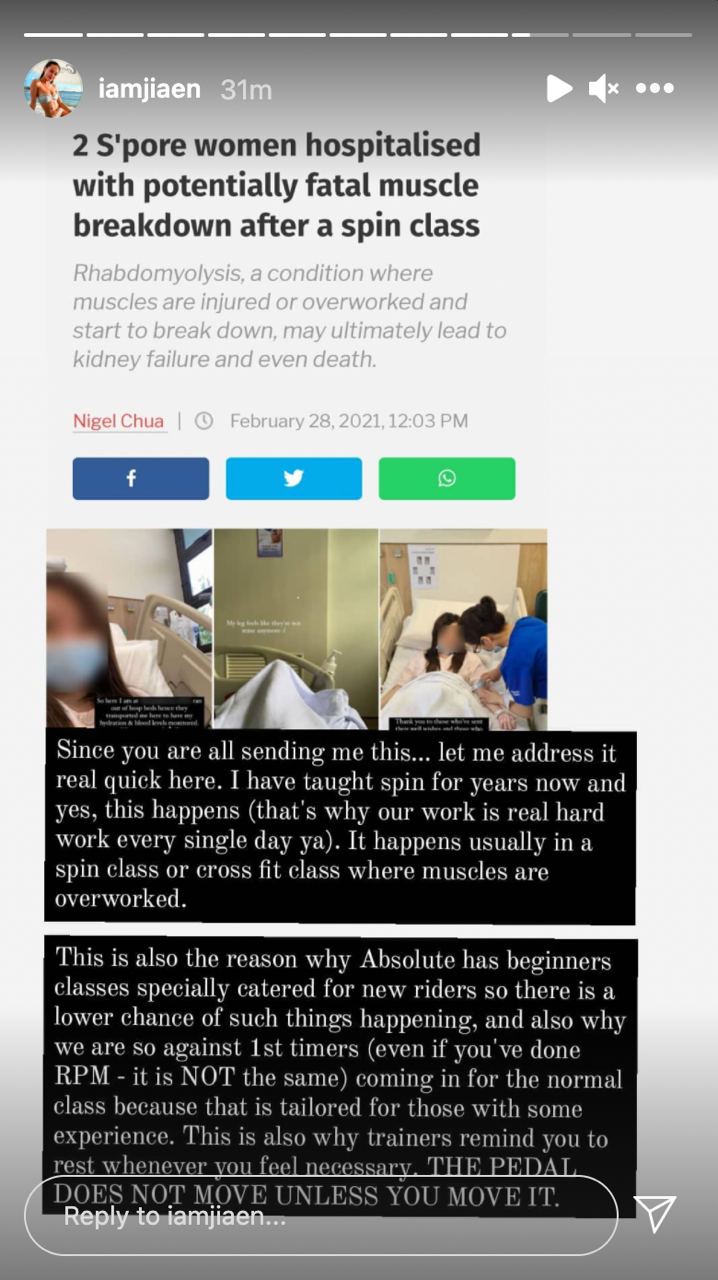