After being a stay-at-home mother for 10 years, Josephine Ho decided to start her own cheongsam label at the age of 45.

Ho was one of the designers who took part in a fashion showcase at Punggol that featured “reimagined” women’s workwear for various occupations, organised by NTUC Women and Family Unit (WAF) and the Women's Wing of the People's Action Party, in partnership with the Textile and Fashion Industry Training Centre (TaF.tc).

The fashion showcase on Mar. 6 also kickstarts NTUC WAF’s month-long series of programmes that celebrates the aspirations of women.

Speaking to Mothership, she shared with us her entrepreneurial journey and why it's never too late for mothers to carve out a career.

Took a career break to focus on family

However, she decided to take a hiatus to focus on her family as it was "quite draining" to juggle work and family.

Ho shared that her health took a toll and she had miscarriages twice back then. Due to health reasons, she had to stay in bed when she was pregnant with her second child.

She subsequently decided to sell her maternity business, one that she spent six years building, away.

The mother of three decided to turn her interest in Cheongsam into a business after her oldest boy completed primary school.

Ho first attended a 13-module crash course at TaF.tc where she learnt more about fashion techniques and business in four months.

Ho shared that she was completely clueless about cheongsam making prior to that, even though she's always been a cheongsam lover.

After completing the course, Ho took up a 4-month internship before spending the next one and a half years doing cheongsam for free to gain the confidence to start her own label.

Ho named her label "Qi Qing" (旗情) which summarises her love for cheongsam in Chinese as it means "having eyes only on Cheongsam" (对旗袍情有独钟).

Ho put a modern twist to her cheongsams and also focused on making her designs comfortable and versatile.

Back in 2017, when she started working on her cheongsam label, Ho's children were between eight and 15.

Ho admitted that there was a period of adjustment that her children had to go through as she recalled one of the toughest questions she received from one of her sons:

Adding to that was a nagging fear of failure:

"Frankly, there’s always a fear [of failing], but if you never step out, you’ll never know."

Thankfully, her family has remained her greatest pillar of support and they treasure the limited time spent together even more than before.

"It's a blessing in disguise," Ho quipped, as the family has unexpectedly become even more close-knitted after she started Qi Qing.

Thinking ahead, Ho shared that as the boys grow up and eventually start their own families in the future, she's glad that she now has Qi Qing as "another baby" to focus on.

Qi Qing added a new purpose to life for Ho as she hopes she can pass on the skill of making cheongsam to other people if she decides to retire.

Now a successful cheongsam maker, Ho said that she responded to an invite to the REIMAGINE fashion showcase as an alumnus of TaF.tc.

The designs showcased two designs from her -- an urban farmer wear and a confinement nanny's outfit.

She shared that her mother and her mother-in-law were the inspiration behind these two designs.

Ho's mother is an avid urban farmer who first started growing ornamental plants like money plants along the corridor but now manages various types of edible greens in a community garden while Ho is thankful towards her mother-in-law's help during her confinement periods when she gave birth to her three sons. 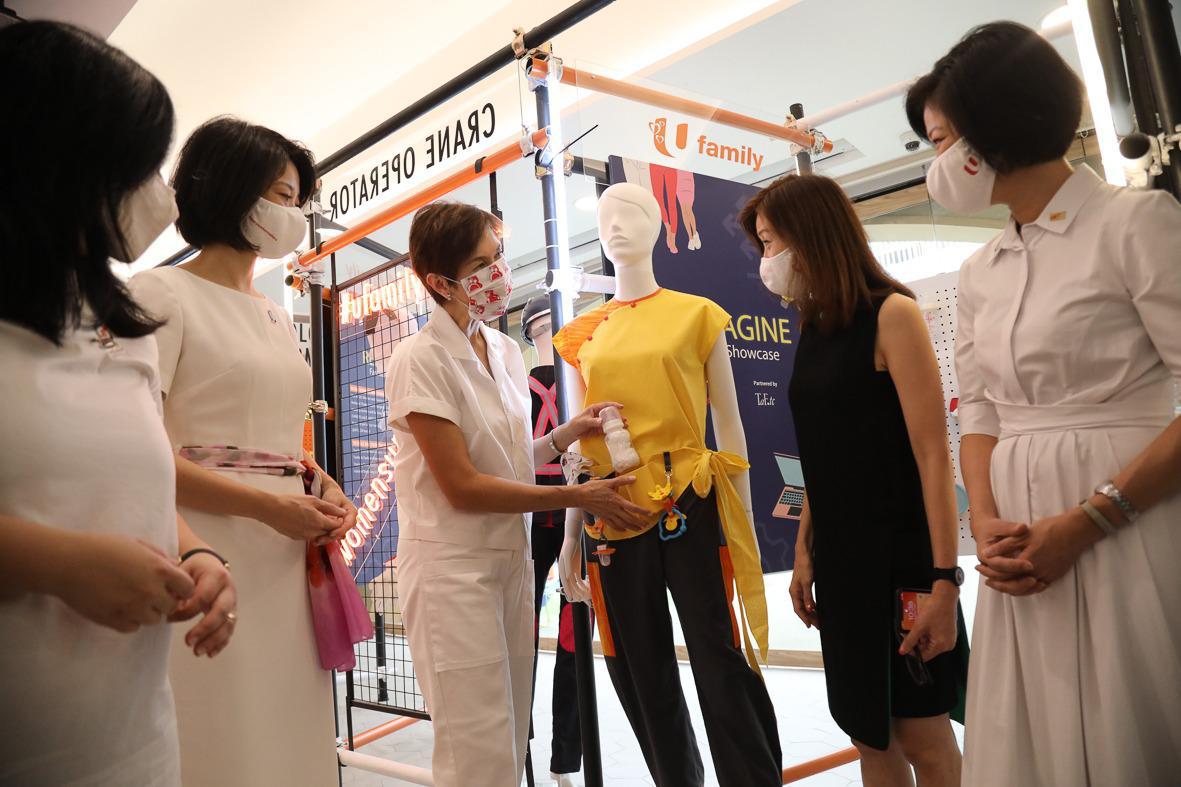 For her designs, Ho used cloth scraps from her old denim skirt as well as some leftover fabrics from her cheongsam shop in her design to fit the sustainability theme.

"Everybody is doing their part for sustainability," Ho gave her take on how individuals can go green and this might not entirely be a new concept, citing the "hand-me-down" culture among mothers in Singapore as well as how her mother is creating her own eco-friendly fertiliser made of eggshells and fruit peels from home.

"There are too many ways to be sustainable, this new project is really a whole new experience. If it comes to a point, you all can’t wear [your cheongsam] anymore, I can upcycle it to create another piece of cheongsam as well," Ho said.

Adding on to that, Ho also hopes that the designs from this fashion showcase can be materialised one day.

"I hope this is not a fashion showcase that stops at the catwalk and just for show, it will be great if there’s really an urban farming company that’s willing to produce uniforms from old denim and materialise this."