On Mar. 14, Today published an opinion piece as part of its “Gen Y Speaks” column titled: “This is why I don’t want to be woke. Don’t cancel me for it”.

Written by National University of Singapore (NUS) student Dana Teoh, the commentary delved into the phenomenon of “cancel culture” and the “woke” movement.

The 24-year-old — who is studying media and communications — wrote about her dislike of “cancelling”, which she briefly defined as “extreme censorship”.

“The push for kinder and more inclusive norms should not entail condemning dissenters,” she wrote.

In elaborating her point, Teoh made reference to Harry Potter author J K Rowling whose tweets regarding the trans community stirred controversy (to say the least) in 2020.

“That is insane to me. Can we no longer have discussions?”

“There’s nothing wrong with saying, believing, and perhaps even convincing some people that what she thinks is true,” Teoh added.

Initial reactions to the article

The article, which was shared on Today’s Facebook and Twitter pages, attracted a great deal of attention — ranging from those voicing straightforward agreement with Teoh's points to others delivering sharp critiques of her arguments.

Those in agreement with Teoh’s ideas

There were those who agreed wholeheartedly:

As well as some who defended the author and her views, against critics.

Some who criticised the article pointed out that there was a distinction between getting cancelled and being on the receiving end of backlash for “promoting problematic ideas”.

Some also called attention to the author’s admission of ignorance and how it seemed to contradict her opinion piece about wanting to avoid “woke culture” because it encourages narrow-mindedness and refuses to acknowledge different opinions.

Teoh was also criticised for writing about a topic she did not understand well, with many pointing out that the author could have taken time to research in greater depth.

While another group of commenters objected to the fact that the author had used slurs at the beginning of her piece.

Others pointed to negative comments, and the writer getting cancelled, as evidence that her points were well-made.

As can be expected on social media, not all of the comments were constructive.

A number of commenters did not engage with the article’s points, but instead declared that they did not understand what it means to be “woke” at all.

Others, however, drew attention to Teoh herself, descending into name-calling, saying that she “should not speak” or that she should “shut up”, was “narrow minded”, and even drawing attention to her appearance.

“im taking this as an invitation for Me to cyber bully,” wrote one Twitter user.

A number of commenters were also particularly upset about Teoh's comments on transgender people and related issues.

In her article, Teoh explained that she grapples with the "concept" of an individual being transgender and does not "fully comprehend the trans experience".

However, Teoh said that she struggles with admitting that she would like to know more about issues such as trans rights and transphobia:

"Because now, even asking can be construed as disagreeing or being unsupportive of “the cause”, and thus, offensive."

In response, some went as far as to label her as transphobic, accusing her of “mudslinging a minority”.

Still, others were more conciliatory, volunteering resources on the issues raised in Teoh’s article. 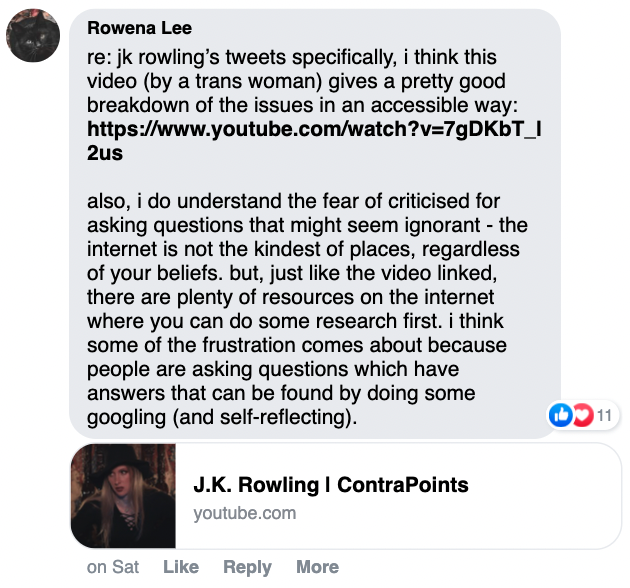 Rice Media also took the opportunity to weigh in on the issue with a “peer review” of Teoh’s article — a section-by-section analysis of the media student’s article.

The analysis concluded that Teoh's opinion piece was not amply substantiated with examples or personal experience, resulting in a sweeping attribution of extreme "woke" responses to an entire community which, ironically, was what Teoh railed against in her piece.

“Its publication has, however, raised interesting questions on what constitutes quality journalism in Singapore,” wrote the Rice Media writer, who also pointed out that Teoh, her journalism instructor (veteran journalist Bertha Henson), the Today editor share the blame for putting out a commentary with "glaring holes".

In response to the outcry, Henson took to Facebook on Mar. 15 to explain that the article was written as an assignment for a class she teaches at NUS.

Students were asked to write about how they felt about “woke” culture as millennials. Henson wrote:

“Of 24 scripts, I thought Dana’s was the best. She has a style of writing that stands out among the class — and from most Gen Y Speaks pieces we have critiqued.”

The veteran journalist also defended her student’s work. She said that the attacks had missed the point of the article by focusing instead on accusations that Teoh was “transphobic”.

“She gave the example of one such “dissenter’’, J K Rowling, who was attacked for her views. She suggested that rather than cancel out the author, an attempt can be made to understand her words.

For that, she was attacked, for not knowing the context and so forth. You would have thought she was backing Hitler.”

Henson conceded that she could have edited some of the more insensitive phrases out of Teoh’s draft and wondered if she should have toned down the article. She however, concluded that it would have removed the authenticity and purpose of personal columns in the first place.

“I left it be, and will stand by the column and the columnist,” she said.

NUS calls for the bullying to stop

Henson also called for the bullying of Teoh to stop, a sentiment that was echoed by NUS who spoke out on behalf of the student.

In a Mar. 16 Facebook post, the university’s Faculty of Arts and Social Sciences (FASS) Dean Robbie Goh asked that those with differing views refrain from making personal attacks against Teoh, adding that the school is committed to ensure a nurturing and supportive environment for all students.

Goh wrote that a "safe and conducive environment" is necessary for rigorous and intellectual debate to take place.

“There should always be opportunity for open dialogue on a diverse range of topics and issues. While views on a particular issue may differ, discourse should be carried out in a civil and respectful manner.”

The post also acknowledged the "good work" of the Department of Communications and New Media in educating students.

"We will continue to strive to nurture balanced and fair discussion," Goh added.