A massive derelict bungalow, Chee Guan Chiang House, located at 25 Grange Road in the prime Orchard shopping district, has been left unmolested by modernity for years.

An aerial view of the building and the sprawling land around it might be unfamiliar to the Singapore public, as such large swathes of private land is almost unheard of.

Yet, the location the house is at is highly recognisable to anyone who frequents Orchard Road enough, as it sits at the junction of Grange Road and Devonshire Road -- just a stone's throw from Ngee Ann City.

The private property premises have been cordoned off from the public with sufficient warning that trespassers will be prosecuted, to keep out prying eyes. 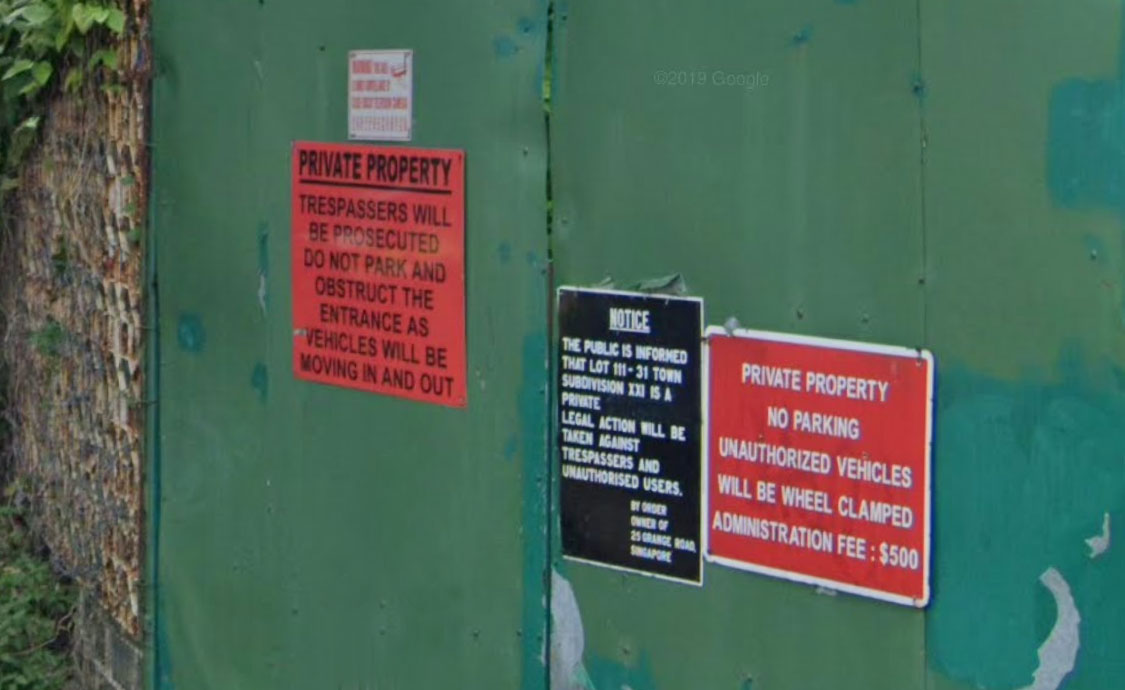 But it continues to fascinate Singaporeans of all stripes, who can only wonder why such a prime property can even go to waste, given the area's surrounding residential and commercial buildings that have been highly developed over the decades.

The house was commissioned by Chee Guan Chiang, who is the eldest son of the first chairman of the OCBC Group, Chee Swee Cheng.

Its current value could be upwards of half a billion Singapore dollars.

The entire plot of land with the house on it:

Its proximity to Ngee Ann City:

Rather than being named after a person or a place, Wellington was chosen because it began with "well", and that sounded like wealth.

The monogram "WH" can be found along the wrought-iron balustrades on the veranda of the house, as well as on the grand staircase inside the house.

There were also a pair of stained glass windows inside the house.

The house was finished in 1938, but the Chee family left the country after the Japanese invaded Singapore in 1941.

It was then used as a boarding house for travellers for several years and it was renamed New Leonie Guest House in 1964.

However, it fell into disuse after that.

Much of the property's current state can be attributed to a legal tussle over the plot of land the house sits on.

Three of the four houses on the land were sold to Lee Tat Development, with the remaining house sold to Grange Heights condominium.

Grange Heights' contractors began using the road -- an 883 square metre strip of land that passes through the Wellington House -- for easy access to Grange Heights.

According to The Straits Times, Lee Tat Development then sought a court declaration in 1974 that the developer of Grange Heights had no way across that road.

The two parties took each other to court several times over the road -- over a span of 40 years.

In 2005, the Court of Appeal said that Grange Heights residents had the right to use the road, but this was overruled three years later in 2008, as Lee Tat Development won the legal battle.

In 2018, ST reported that Lee Tat Development appealed for compensation from Grange Heights condominium's management corporation (MCST), which was dismissed.

The house received conservation status by the Urban Redevelopment Authority (URA) in 2008, but that failed to save the place from its current state of disrepair.

The property continues to be fenced in by iron gates and warning signs to deter trespassers.

These measures to keep out the public were put up some time after 2015.