American TV host Bill Maher, on his "Real Time with Bill Maher" show that aired on Friday (Mar. 12), proclaimed that the United States has "already lost" to China in "the battle for the 21st century".

Saying that Americans are "a silly people", the comedian and political commentator criticised "woke competition" and blamed Americans' preoccupation with it as one of the reasons why they have lost to China.

Nothing ever moves in this impacted colon of a country. We see a problem and we ignore it, lie about it, fight about it. When China sees a problem, they fix it. They build a dam, we debate what to rename it. #SpoilerAlert #WeLost pic.twitter.com/sETFwt7yFT

"On a national level, we've been having infrastructure week every week since 2009, but we never do anything," he said.

"Half the country is having a never-ending woke competition deciding whether Mr. Potato Head has a d***, and the other half believes that we have to stop the lizard people because they're eating babies," he continued.

Maher was referring to the recent controversy over U.S. company Hasbro rebranding the "Mr. Potato Head" toy to just "Potato Head" in a bid to make it gender neutral, as well as the QAnon conspiracy theory revolving around "lizard people".

For the former, Hasbro said in a press release that the rebranding is "to better reflect the full line" -- the line consists of Mr. and Mrs. Potato Heads, as well as all the baby Potato Heads they would be sprouting.

However, some conservative commentators mocked and condemned the move, seeing it as another sop to progressive culture.

China can get things done, unlike the U.S.

Known for his criticism of political correctness, Maher also pointed out that China "doesn't care" about the stereotype of "a Chinese man in a Dr. Seuss book" -- a reference to a voluntary decision by Dr. Seuss's estate to stop producing six of the children's books over racist images.

While Maher did acknowledge the shortcomings of the Chinese government, such as breaking their promise about Hong Kong autonomy, putting Uyghurs in camps and punishing dissent, he also highlighted China's strengths, such as being able to get things done, unlike the U.S.

He said: "There has got to be something between an authoritarian government that tells everyone what to do, and a representative government that can't do anything at all."

He pointed out that in two generations, China "built 500 entire cities from scratch, moved the majority of their huge population from poverty to the middle class, and mostly cornered the market in 5G and pharmaceuticals".

Continuing his point using a sexy catchphrase "we binge-watch, they binge-build", Maher further pointed out that China has "40,000 kilometres of high-speed rail", while the U.S. has "none" -- the U.S. is the only major, advanced nation that does not have a high-speed rail of its own.

"Culture wars" are impeding progress in the U.S.

Continuing his dismal assessment of the U.S., which he thought was bogged down by "culture wars" and debate over partisan issues, he said:

"Nothing ever moves in this impacted colon of a country.

We see a problem and we ignore it, lie about it, fight about it, endlessly litigate it, sunset clause it, kick it down the road, and then write a bill where a half-assed solution does't kick in for 10 years.

China sees a problem and they fix it. They build a dam. We debate what to rename it."

He said: "Do you think China's doing that, letting political correctness get in the way of nurturing their best and brightest?"

He then ended the segment by saying China is "eating our lunch, and believe me, in an hour, they'll be hungry again".

Maher's argument is reminiscent of the debate over the superiority of the "China model" as compared to the Western liberal democracy model that gained prominence in international relations discourse as China's rise became increasingly apparent over the years.

She urged both Republican and Democrat lawmakers to work together on the infrastructure issue, which is one of the few issues that enjoy bipartisan support.

Many American netizens on Facebook bemoaned that their country is lagging behind China while the latter is taking leaps forward, and agree that China has overtaken the U.S. in the great power competition. 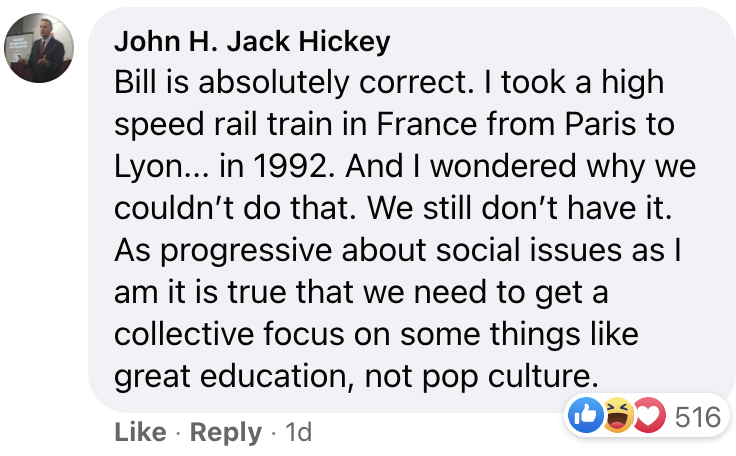 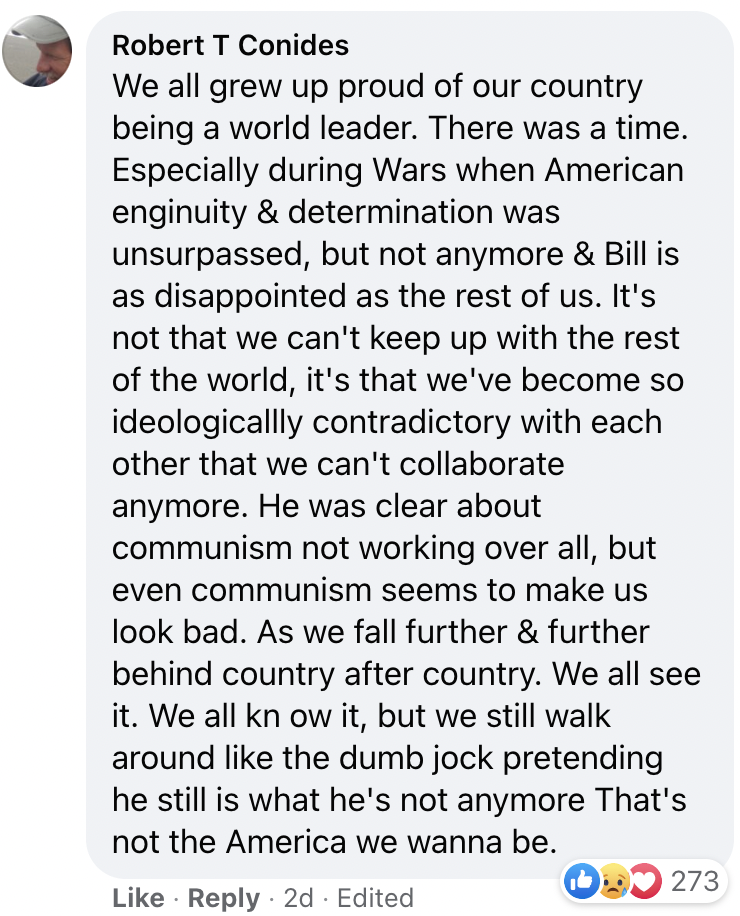 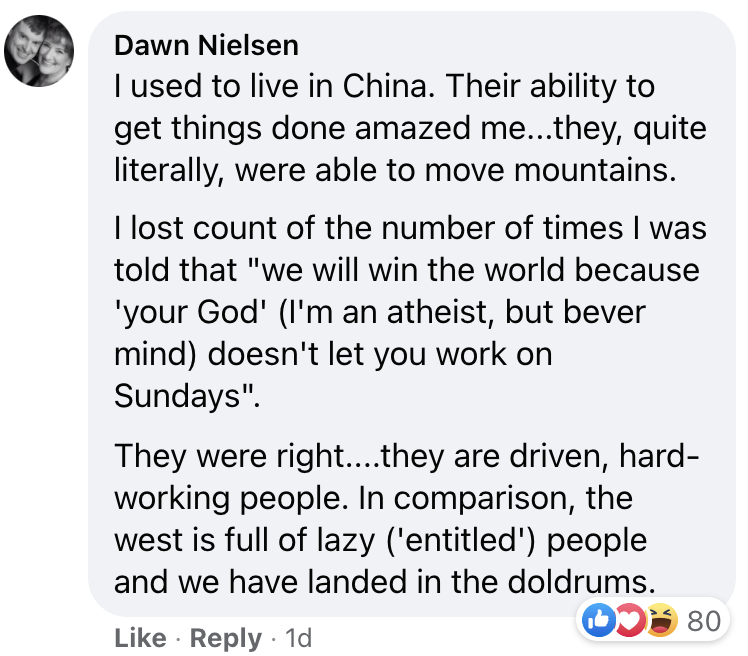 Similar sentiments could be found on Twitter too, despite the higher frequency of criticisms towards Maher as compared to Facebook.

He isn’t saying we need to be China. We need to BEAT China, or at least attempt to compete. While we’re all arguing about a toy’s gender and Q, they are running laps around us. In 20 years not even Americans will want to pay for American tech, medicine, or culture at this pace.

You can watch his segment on China here: