“We need someone who lives somewhat near the office but not too near,” said a message I received one day, disturbing the serenity of my morning.

Community Chest, together with Marina Bay Sands, was organising a virtual walk event — Heartstrings Walk — where participants could either follow a predetermined route around Marina Bay or venture anywhere.

To encourage Singaporeans to take part in it, I was to try (and document) what it’s like to walk home from the office.

“You’re the only one available,” said my taskmaster.

And that’s how one Tuesday evening I found myself gearing up for a 6km route march walk. It would eventually take me nearly two hours (I walked at an extremely leisurely place and took my time to take the photos) to complete the entire journey, but I found it to be a rather pleasant experience, watching the world unwind after a long day.

Back to the start of my walk: Ignoring my colleague’s comments that I — clad in compression tights — was overdressed for the occasion, I headed out the door and into the wilds of Kallang.

I’d be lying if I said I didn’t look at the commuters waiting by the bus stop with a little bit of envy.

Yet, the surprisingly cool evening breeze made for nice walking conditions so it wasn’t all bad.

Earlier, I’d looked up a route on Google Maps to get an idea of just how this walk would go.

Wanting to inject some element of interest into the journey, I decided against the most straightforward path to Parkway Parade (which is near my home) in favour of the “scenic route”.

And by “scenic” I mean the sights, smells, and sounds of Geylang; despite living relatively nearby I’d never actually explored the place properly.

By the time I arrived at Geylang proper, the sun was just about vanishing, allowing the district’s prominent neon signs to shine.

Despite its less than stellar reputation, I quite enjoyed the vibe of Geylang.

To truly savour the experience, I was going without earphones and in between the sound of cars zooming by, Geylang’s native noises came alive.

Families and workers alike lounged in the coffee shops and eateries which seemed to be found at every street corner chatting about their day while produce vendors haggled with shoppers over the price of fruits and vegetables.

As I walked past, hardware stores pulled their shutters down and middle-aged men dotted the sidewalks puffing cigarettes after a long day’s work.

It was laidback yet busy and bustling at the same time.

Geylang soon spilled over into Paya Lebar, where large new shopping malls stand shoulder to shoulder with rundown arcades from decades past.

Closer to the area’s residential flats, most of the stalls at the hawker centre were closed giving the place a peaceful quiet.

The pause in action gave me a moment to realise that I was actually quite enjoying myself during this walk.

While it might not seem like the most exciting activity, it was a nice way to unwind from a long day sitting at the desk.

Besides, a quick check on my smartwatch showed that despite going at a rather (or actually, incredibly) relaxed pace, I was actually burning a fair bit of calories.

As easy and relaxing as the walk, it was good to be reminded that life isn’t so smooth sailing for many in Singapore.

Doing the walk for Community Chest, shows that if other ways of helping the less fortunate may seem daunting, there are less intimidating means — such as going on a stroll — that can go someway to making a difference in the lives of others who call this country home.

Before I knew it, I was on the homestretch: Joo Chiat Road.

This was an area I was quite familiar with, having visited often to grab a meal.

But slowing down and really soaking in the environment, I was struck by how much of a Vietnamese enclave the neighbourhood was.

Apart from the myriad of restaurants serving authentic pho and other Saigon fare, the streets were lined with little Vietnamese speciality stores with the families who ran them gathering for dinner outside and conversing in their native tongues.

Of course, for those who prefer something a bit more “Instagramable”, Joo Chiat is also home to multiple hipster cafes and quirky casual dining restaurants.

As I saw off the last corner shop eatery on Joo Chiat Road, where expats and young professionals were gathered for some after-work drinks and food, my destination was finally in sight.

It had taken me a little longer than expected (one hour and 48 minutes) but I’d really been moving at a more than leisurely pace, stopping at times to take photos. 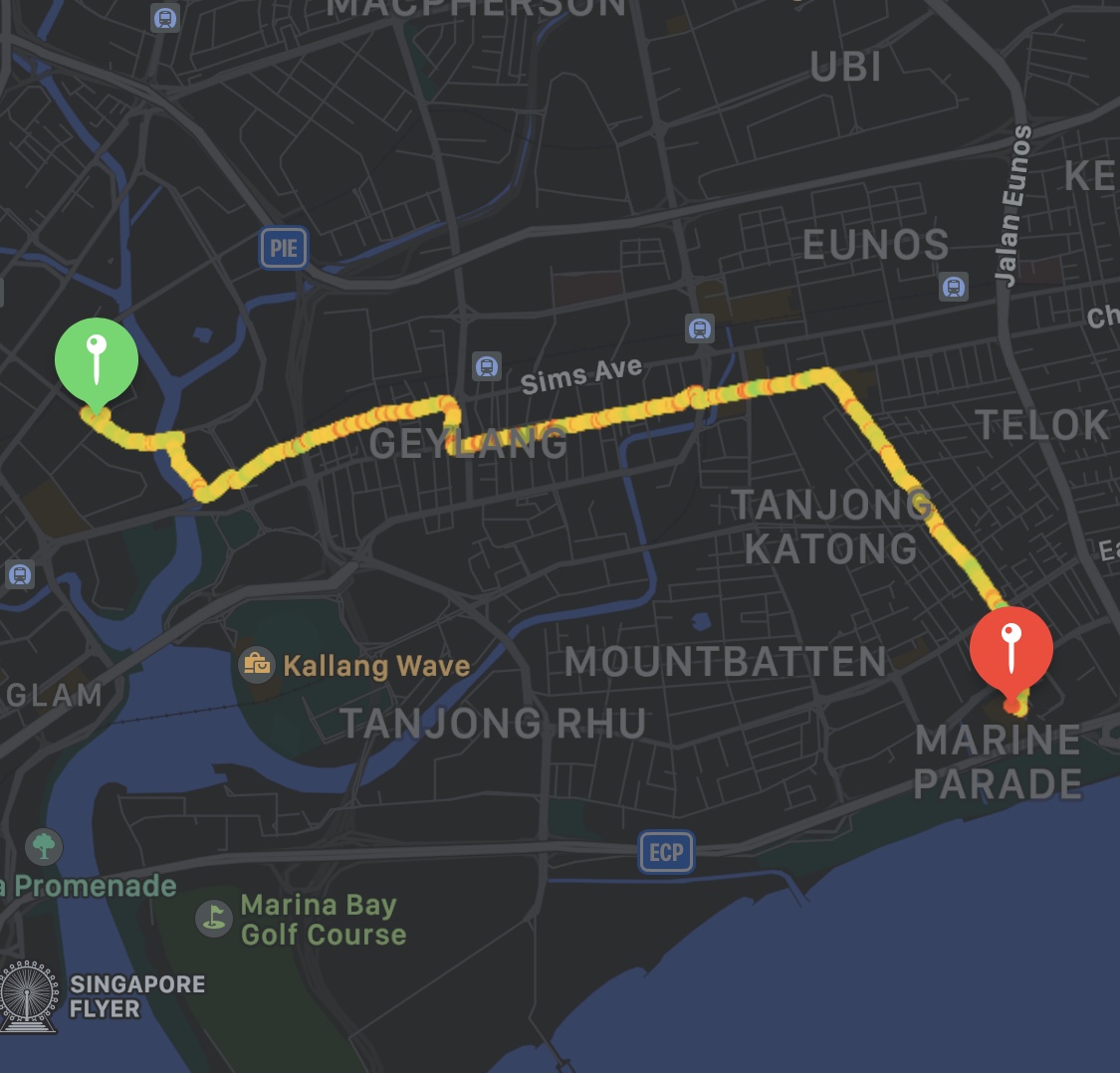 That’s a pretty decent workout without requiring any torturous huffing and puffing, quite a surprise given that all I did was walk. 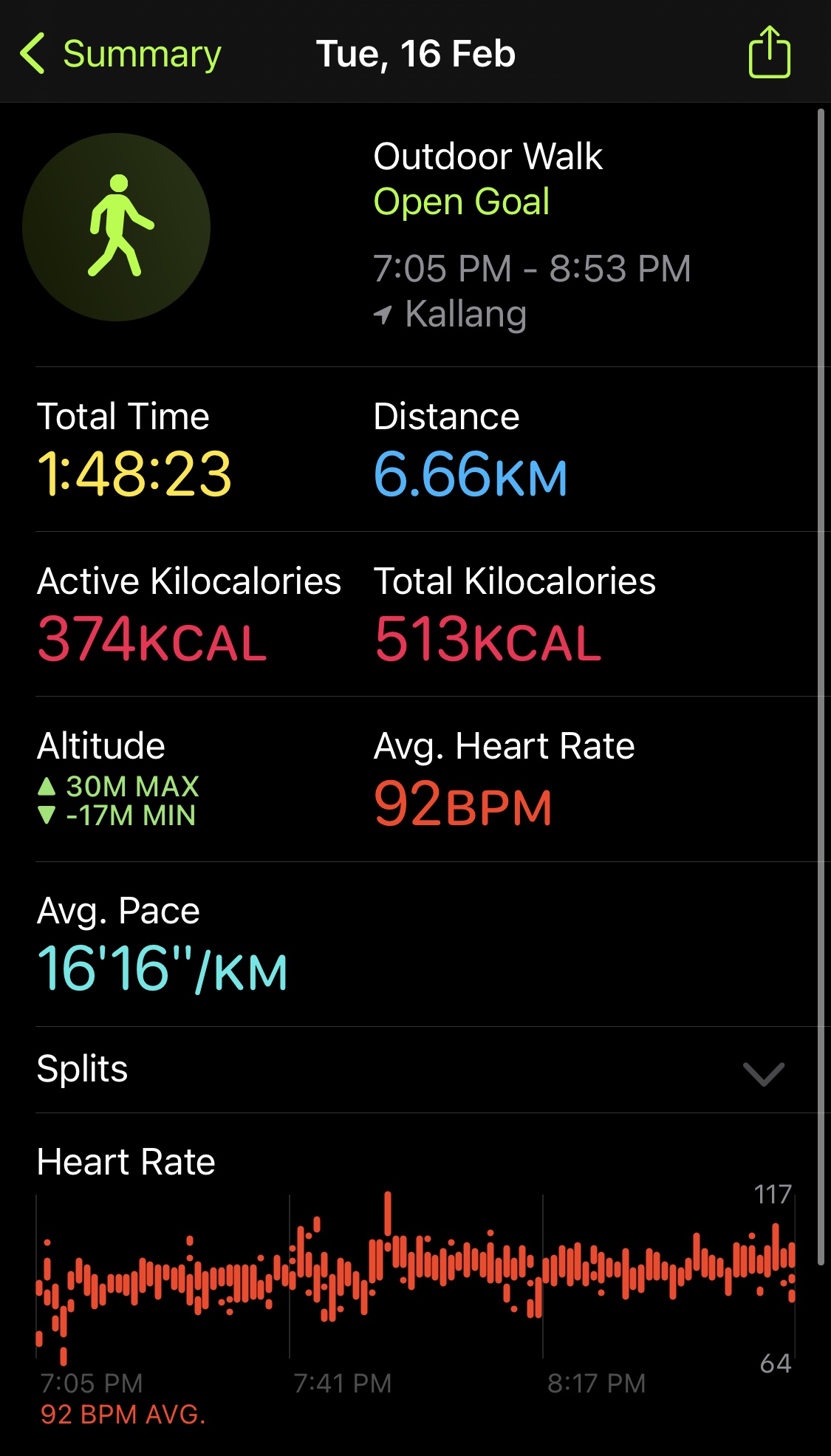 So back to the whole reason I was doing this walk in the first place.

Community Chest’s annual fundraising event, Heartstrings Walk, will be held virtually this year, having been launched on Feb. 28.

Being a virtual event, participants can sign up for two different ways to cover a distance of 5km: either with their own route wherever they please or at a predetermined route with interactive components around Marina Bay.

This includes augmented reality filters on Instagram for users to check out while walking. You can find them here, here and here.

In addition both types of participants will receive attractive e-vouchers in return for their efforts.

Each kilometre of the walk represents one of the five causes supported by Community Chest:

Those hoping to get involved can make a donation; companies hoping to contribute can also rally their staff to sign up.

Or they can simply join by going on a walk, with a donation of S$28 to register to walk anywhere, or S$38 to walk Community Chest’s predetermined route around Marina Bay.

As I found out, it’s an easy and healthy way to help the less fortunate.

Find out more about the Community Chest Heartstrings Walk and sign up here.

Writing this Community Chest-sponsored article was good exercise for the author.