The recent death of a beloved Pulau Ubin "guide" dog Kopi-O after an alleged hit-and-run left many netizens and Pulau Ubin visitors in mourning.

The dog left behind siblings Teh-O and Teh-C, and was buried on the offshore island.

A flood of tributes has since streamed in, with numerous people posting photos and videos they had taken of the small, stubby-legged dog on social media.

In the meantime, Kopi-O's owner has requested for some privacy and that visitors to Pulau Ubin avoid attempting to locate Kopi-O's grave.

Kopi-O's family: No need for any funds

However, amidst the grief and hubbub, there have been some concerns over attempts to raise money for the late Kopi-O.

On Feb. 8, these concerns were first aired by Ubin fish farmer Phillip Lin in a post on the Pulau Ubin Facebook group, stating that Ubin residents and Kopi-O's owner and family "are in no way associated with the fundraising activity".

"We grieve for the loss of Kopi-O but will request that the public give us some personal space. We do not need any funds for any activities held in place for Kopi-O."

This statement was made perhaps in response to the organisation of various activities following the dog's death including the setting up of a memorial for Kopi-O and plans to visit his "favourite haunts" and the accident site.

A Facebook group named "Project Kopi-O Steering Committee" was even set up to maintain the "legacy" of Kopi-O.

Some of the group's goals were stated to be fundraising for a statue of Kopi-O, planting more CCTVs on the island and advocating for harsher driving laws.

The group, however, appears to have been deleted. 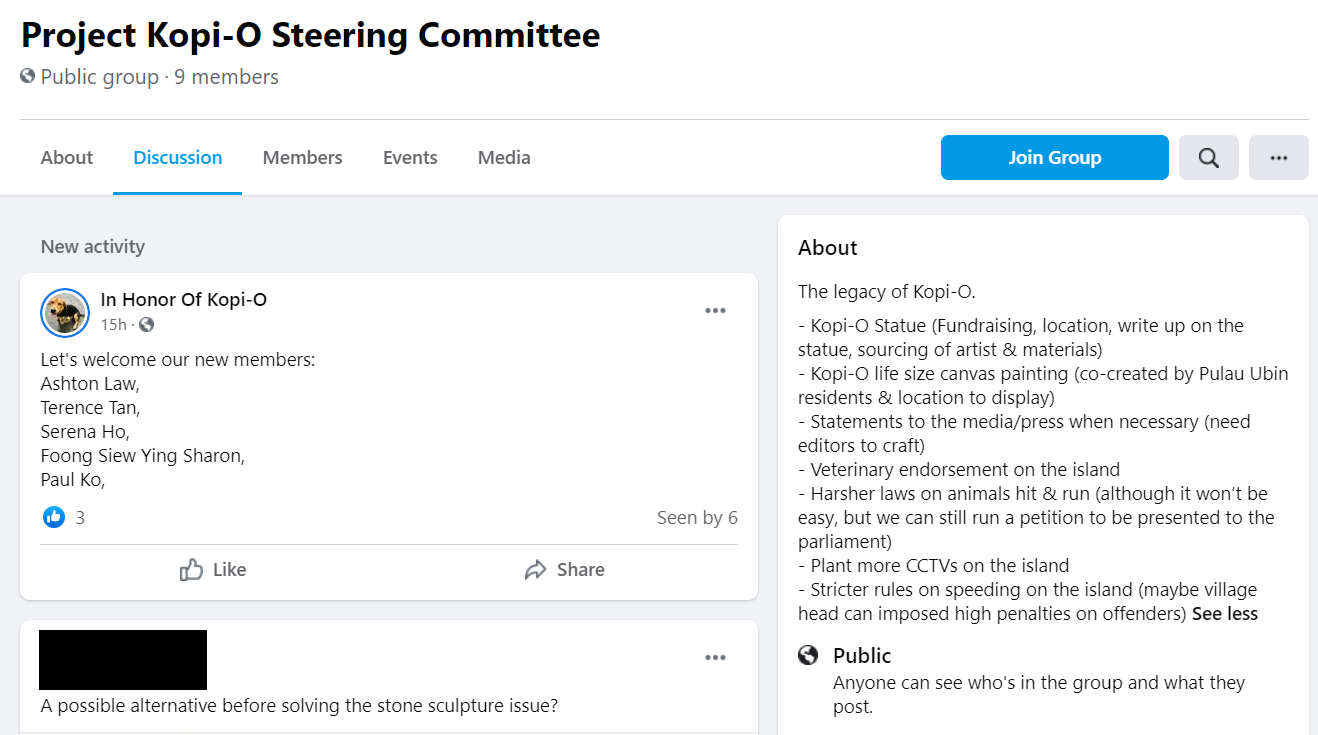 Family does not want any money

Today (Feb. 9), the son of Kopi-O's owner, Cai Fujie Jay, came forward to clarify the issue on the Facebook group, as "the situation seems to get out of hand and ridiculous".

Cai said that he was speaking on behalf of his father and the family, and had just become aware of "fundraising" efforts for Kopi-O.

"My family is NOT involve, NOT approach, NOT associate with such activities.

My father WILL NOT accept anything especially if there is money involve. Even if there is fund being raise eventually, he will still REJECT taking them."

He added that although he understood that the person behind the fundraising had "good intentions", he requested for the person to "stop using the name of [his] father and Kopi-O".

"All these attentions of Kopi-O’s death are too overwhelming and are not helping, in fact, it is disrupting his lifestyle in Pulau Ubin," Cai said of his father.

Cai also told Mothership that his father had previously told Ubin residents not to purchase anything like flowers or toys for Kopi-O.

Public can donate to animal shelters instead

He shared that his father had been greatly impacted by Kopi-O's death, and is currently trying to move on.

He added that "simple things" such as sharing videos and photos of Kopi-O "are good enough for us".

Should members of the public want to offer their help, they can donate to animal shelters instead, Cai said.

In his post, Cai also took the time to thank them for their tributes and condolences.