The Ministry of Health (MOH) has confirmed an additional 12 cases of Covid-19 in Singapore, as of 12pm on Thursday (Feb. 11).

There are three locally-transmitted infections in the community. There are no new cases in the dormitories.

Of the three cases in the community today, two are currently unlinked.

He developed a dry cough on Jan. 28 and anosmia on Feb. 9 but did not seek medical attention. He was subsequently detected from community surveillance testing of stallholders and shop owners in Chinatown on Feb. 9.

His test result came back positive for Covid-19 infection on Feb. 10, and he was conveyed in an ambulance to the National Centre for Infectious Diseases (NCID).

Case 60150 is a 32-year-old male Singaporean who is the son of Case 60138 and works part-time as a waiter at Swensen’s located at Changi Airport Terminal 3.

He was last at work on Feb. 8. He developed a runny nose on Feb. 8 after work but did not seek medical treatment.

As he had been identified as a close contact of Case 60138, he was contacted by MOH on Feb. 10 and placed on quarantine.

same day. His test came back positive for Covid-19 infection on Feb. 11.

MOH urges everyone to do their part to reduce the risk of transmission.

Those who are unwell, including those showing early/mild symptoms, should be socially responsible and seek medical attention immediately and stay at home to prevent the spread of illness to others.

Case 60145 is a 20 year-old male Singaporean who is a full-time National Serviceman. He works at the Singapore Armed Forces premises at 200 Airport Road.

He does not stay in camp, and his work does not entail interacting with other units. He felt unwell on Feb. 3, and sought medical treatment at a general practitioner clinic.

As he did not have symptoms associated with acute respiratory infection, he was not tested for Covid-19 but was placed on medical leave.

He subsequently went back to work on Feb. 8, and on Feb. 9, he developed fever and a runny nose.

He sought medical treatment at the medical centre located at Paya Lebar Airbase and was swabbed.

His test result came back positive for Covid-19 infection the next day, and he was conveyed in an ambulance to NCID.

In the meantime, all the identified close contacts of the cases, including their family members and co-workers, have been isolated and placed on quarantine, and will be tested at the start and end of their quarantine period so that asymptomatic cases can be detected.

Serological tests for the close contacts will also be conducted to determine if the case could have been infected by them.

There are nine imported cases, who had already been placed on Stay-Home Notice (SHN) upon

Among the nine imported cases: 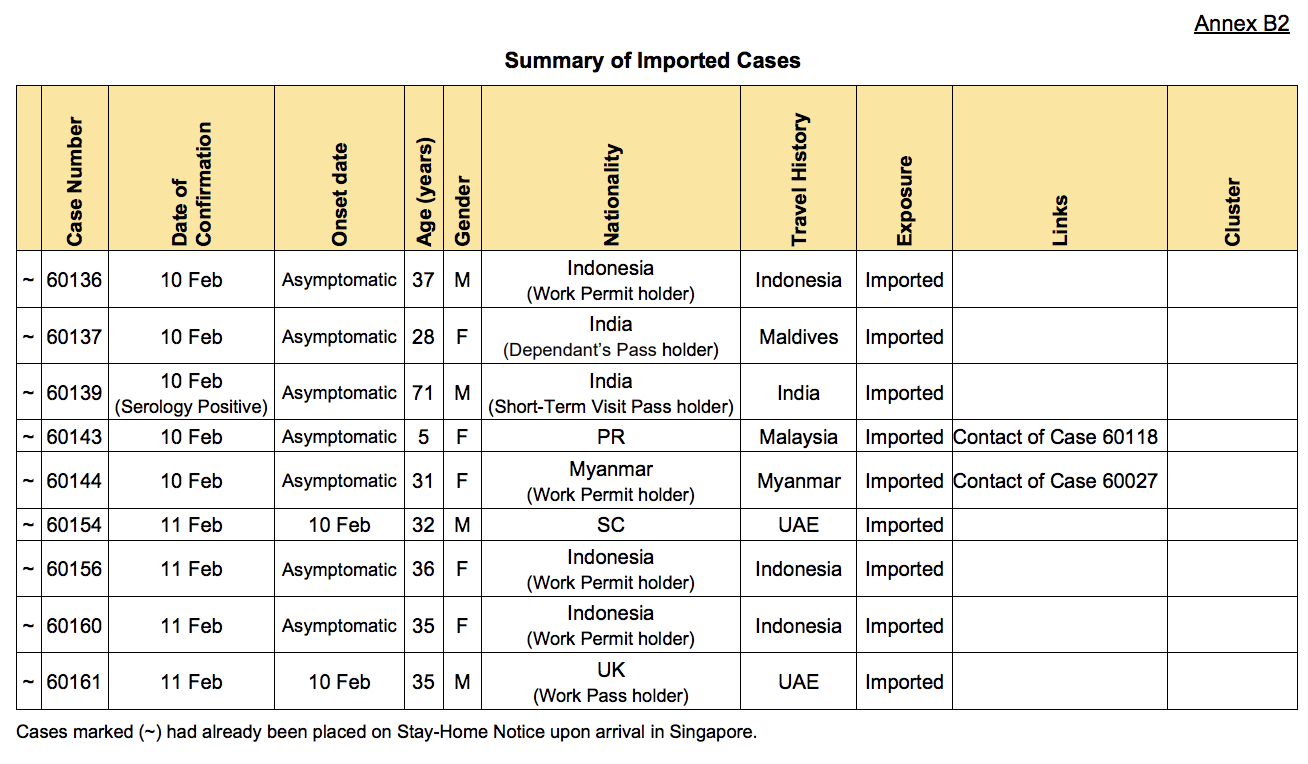 32 more cases of Covid-19 infection have been discharged from hospitals or community isolation facilities.

In all, 59,558 have fully recovered from the infection and have been discharged from hospitals or community care facilities.

There are currently 33 confirmed cases who are still in hospital. Of these, most are stable or improving, and one is in critical condition in the intensive care unit.

139 are isolated and cared for at community facilities. These are those who have mild symptoms, or are clinically well but still test positive for Covid-19.

Six new locations were added to the list on Feb. 11:

Here is the full list of locations visited by cases in the community during their infectious period in the past 14 days, as of Feb. 11: 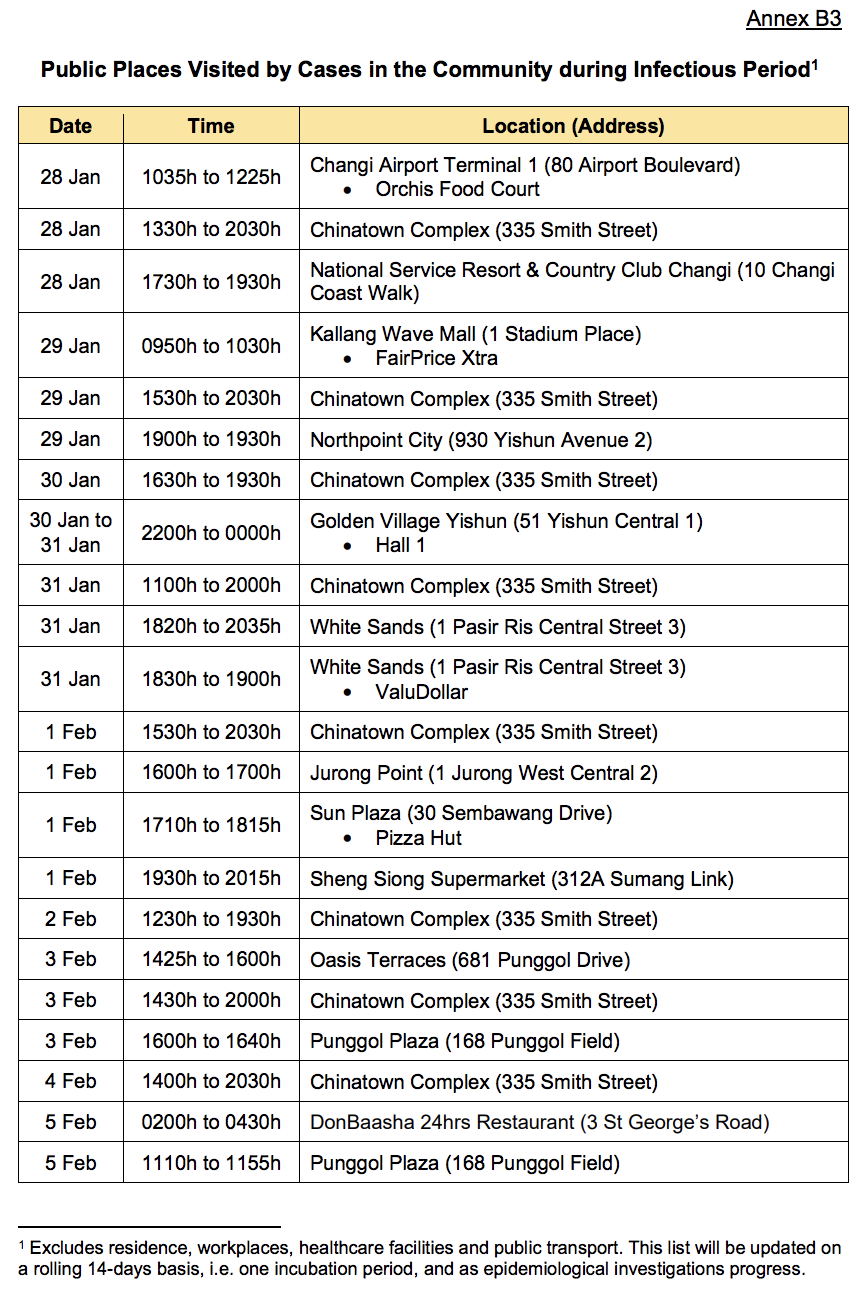 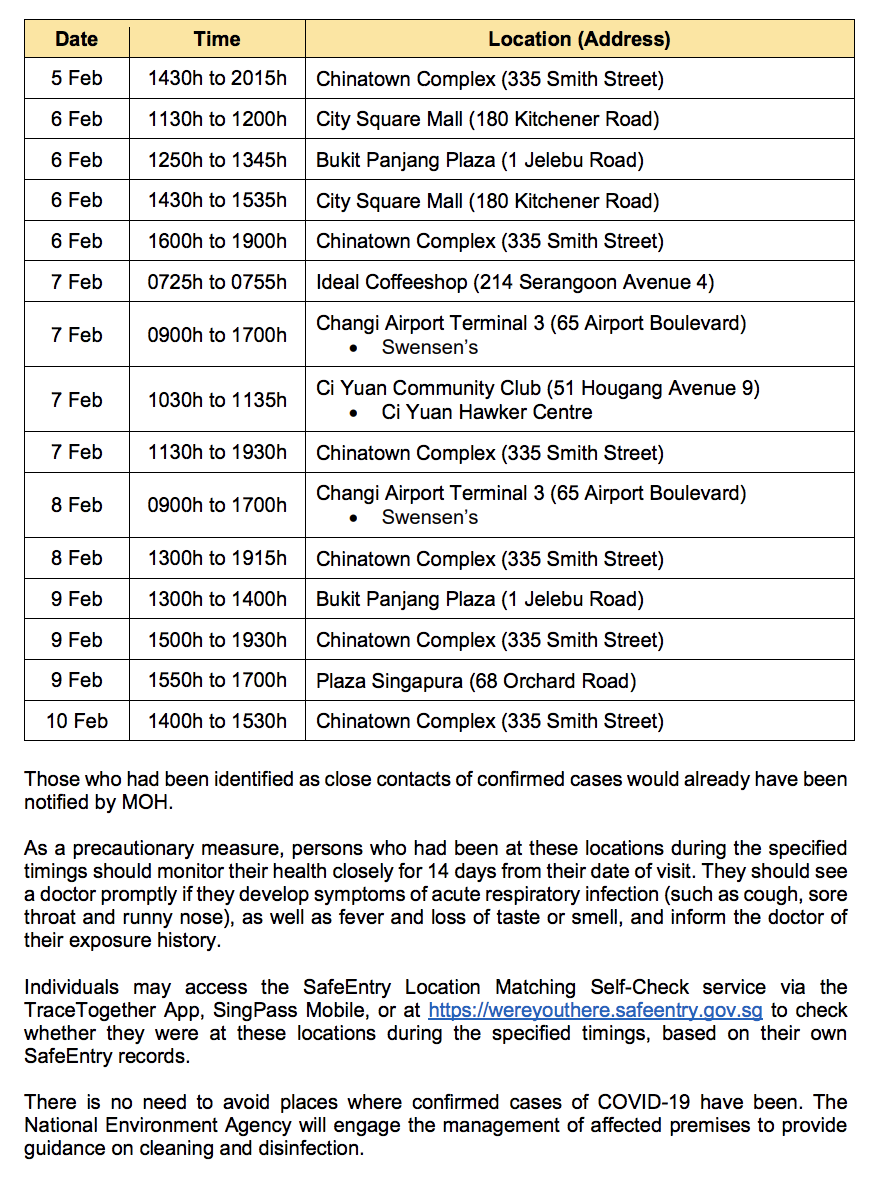