Sharul had previously spoken out against Viswa for a "sexual comment" he made to her that she felt was "inappropriate and offensive".

Another woman, Kiran Kandade, also made allegations against the host of sociopolitical talkshow Inconvenient Questions.

In a statement published on Facebook on Feb. 7, AWARE praised the two women for sharing about their experience.

"Kudos to Sharul for not letting the harassment slide, and speaking up about her experience to the show's production team, and then on social media," wrote the advocacy group.

"She may not have known this at the time, but in speaking up, she was empowering and encouraging other women to do the same."

AWARE also called on Viswa to denounce "hostile and menacing" comments attacking Sharul and Kiran, noting that they are "extremely concerned" about the ugly and insulting victim-blaming comments that the two women have received.

The group noted that some of the accounts appeared to have been created for the sole purpose of intimidating Viswa's accusers, and said that "this has to stop".

It also invited Viswa to "categorically denounce these attacks on women who are coming forward to share their harassment experiences".

In response, Viswa posted a comment on AWARE's post, acknowledging that the group had raised some "important points".

"I do urge that we desist from using extreme language in putting down views expressed by Ms Channa, Ms Kandade and others in this FB page," he wrote.

The CEO of communications consultancy Strategic Moves also took the opportunity to urge others "to hear each other without the need to suspend civility".

He called the ordeal a personal "learning experience". 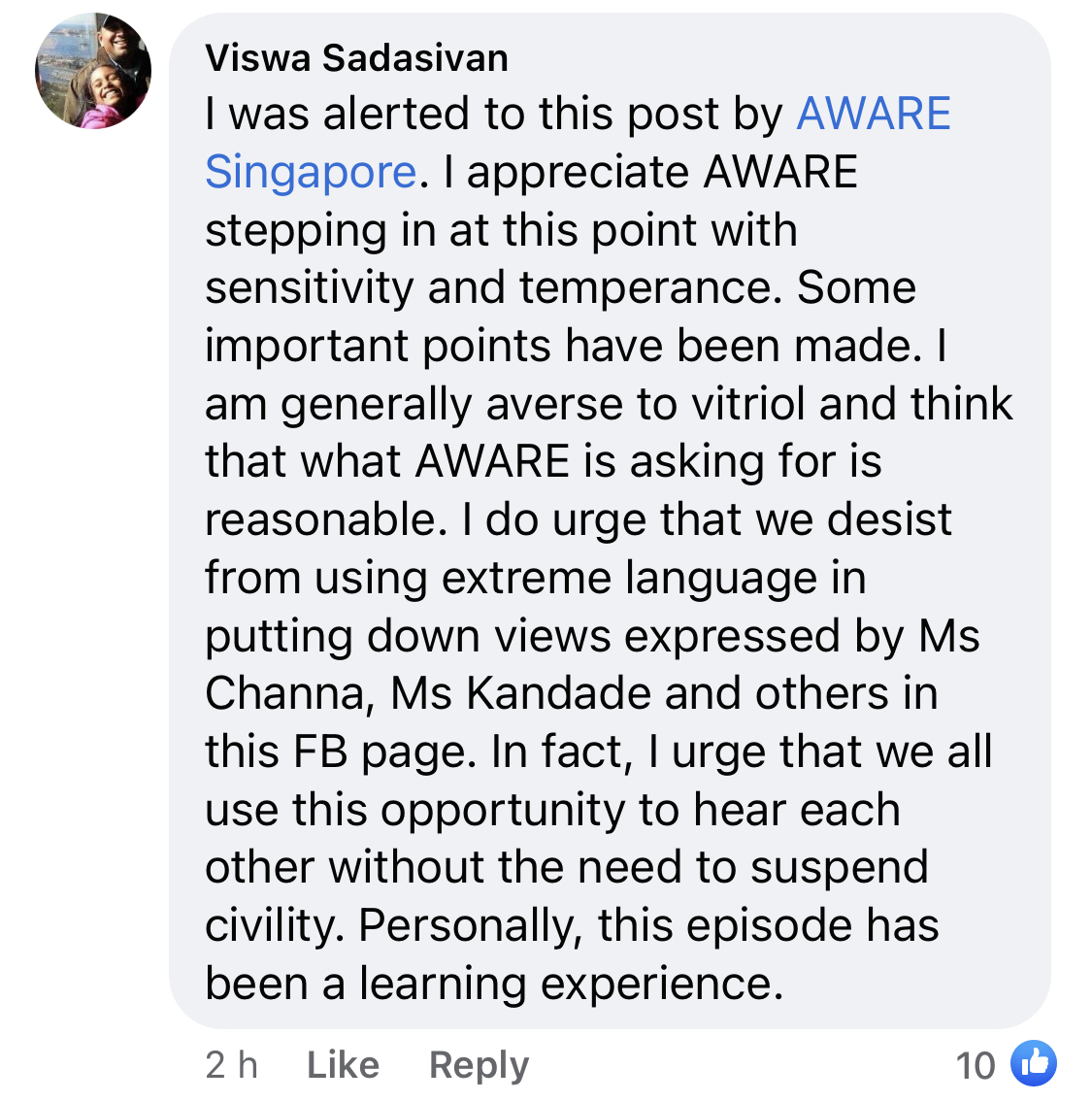 Harassment not determined by subject's intentions

"Viswa has also brought up his support for women’s rights, and for AWARE’s work in particular," wrote the group, referring to a previous statement by him.

"While he may have behaved honourably with other people, we note that these two seemingly contradictory things — a belief in gender equality, and harassing behaviour — can and do co-exist in many people."

The group argued that whether an incident counted as harassment was not determined by the subject's conscious intentions but by the action's impact on the victim.

"In fact, to depict harassment as 'an error in judgment' — i.e. a simple slip of the tongue that occurs for no reason and has no bearing on a person's character — glosses over the misogyny at its roots."