Do you want to be a Logistics Analyst with Tesla in Singapore?

The electric car company headed by Elon Musk is hiring here and recruitment notices have been put up.

Potential candidates should possess at least three years of experience working with "Logistics in an automotive environment or in Logistics & Warehousing", the ad said.

Candidates should have undergone tertiary education, though it is "preferred", and apparently, not required.

One part of the ad has caught the attention of some.

A requirement for the job is the need to be fluent in both English and Hindi, though fluency in "other local languages is a bonus". 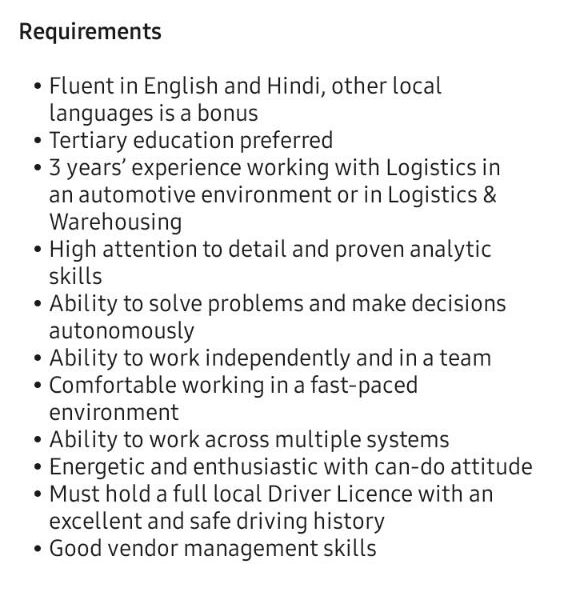 This part of the ad was noted by a HardwareZone forum user who posted about the job ad on January 14.

The job opening was posted on LinkedIn, and is also viewable on Tesla's website.

According to the ad, the Logistics Analyst in Singapore has to ensure "smooth vehicle movements to the correct locations" in a timely manner.

The hired personnel will also "co-ordinate the flow of parts from the third party logistics warehouse to Tesla Service Centres and Body Shops across the Singapore market".

Another requirement is to communicate with multiple departments and third parties, while coordinating a large volume of transport moves.

The HWZ forum was abuzz with discussions about the job ad, as such recruitment ads that feature language requirements are understood to be discriminatory against certain individuals.

Here are the responsibilities of Tesla's Logistics Analyst in Singapore, taken from its LinkedIn job ad:

One HWZ forum user pointed out that the speaking Hindi requirement could be due to Tesla's recent foray into India.

Others made snide remarks in response to the job posting:

As of the time of writing, there are 38 applicants for the job opening.

There are other openings listed for Tesla's operations in Singapore, including country manager, sales advisor, vehicle readiness specialist, and store leader among others.

The Straits Times reported that the number of Hindi speakers in Singapore had grown to 50,000 in 2017.

Following public scrutiny, it appears that Tesla has removed the Hindi-speaking requirement from its ad on its website.

But the requirement is still visible on the LinkedIn page.