Update on Jan. 27, 11am: The article has been updated with NEA's statement.

On Monday, Jan. 25, a peculiar affliction simultaneously struck a large number of students from Springdale Primary School, forcing many to leave school midway through classes.

The affected students, 70 in total, all had similar symptoms — an "eye irritation", or burning sensation in the eyes.

Confusion among parents, students sent home and to doctor

A Mothership reader, whose daughter is one of those affected, shared that the school first contacted them at around 12:40pm that day, telling them that their child had "complained" about some irritation in her eye.

The reader, who refused to disclose their identity, said when they went down to collect their daughter from school, they saw other parents coming to pick up their children too. That was when they realised that the affliction was more widespread than initially thought.

Word of the mysterious condition soon spread in WhatsApp chats among parents. Screenshots of the WhatsApp conversation shared with Mothership showed the confusion expressed by parents at the sudden incident.

Several parents revealed that their children were among the group of students that were sent home with a "burning feeling" in their eyes.

One parent's child said there were apparently many other students in the school's sick bay as well.

Many parents claimed that the school had sent their children home without any explanation.

The reader told Mothership that he was advised by the school to send their daughter to a doctor. However, without knowing the context or cause to the sudden incident, the reader said the doctor was unable to diagnose the condition.

Although the reader said their daughter's eyes were not red or sore-looking, the burning sensation persisted after she returned home.

Cause of incident could not be ascertained

The parent added that in their daughter's Primary 5 class alone, 20 students were sent home. They speculated that students from other levels were affected as well.

A subsequent email from the school, shared with Mothership, stated that the affected students had been attended to, and that their parents had been informed.

Springdale Primary also revealed that they had contacted the National Environment Agency (NEA) and the Ministry of Health (MOH). 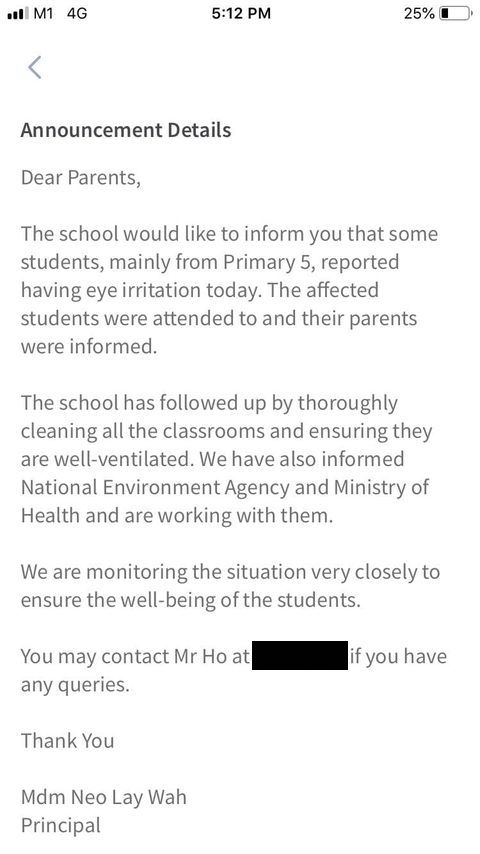 On Tuesday, Jan. 26, the reader said their daughter's eyes were fine.

In response to Mothership's queries, Springdale Primary shared that around 70 students experienced "eye irritation" on that day.

The cause of the incident could not be ascertained.

Following the incident, the classrooms were cleaned and ventilated. Some of the students have also returned to school today.

The school added that it is currently investigating the incident.

You can read their full statement here:

"About 70 students experienced eye irritation in school on 25 January. We immediately attended to the students and alerted their parents, some of whom sought medical attention. We could not ascertain the cause of the incident. As a precautionary measure, the classrooms were thoroughly cleaned and ventilated.

Most of the affected students have returned to school today. The remaining few are resting at home.

The school is working with the relevant authorities to investigate the cause of the incident, and will continue to monitor the well-being of our students closely."

NEA told Mothership that air quality readings nearby were within the normal range.

No other feedback about the air quality in the vicinity was received as well.

NEA is working with the school to investigate the incident.

"The National Environment Agency (NEA) is aware of a case where students at Springdale Primary School experienced “eye irritation”. The air quality readings at the nearest monitoring station to the school remain within the normal range. NEA has not received similar feedback in the vicinity of the school, or any upsurge in air quality feedback during the time of the incident. NEA is working with the school to investigate the cause of the incident."