Local supermarket chain Sheng Siong has reportedly performed "tremendously well" for the "turbulent" year of 2020, compared to previous years — and staff are getting a windfall.

The total annual bonus that each employee will supposedly receive will range from nearly 4.7 months for part-time staff to more than 15.5 months for employees holding the positions of assistant manager and above, an internal company circular shows (see below).

Mothership has reached out to Sheng Siong for more information on the matter.

Explaining that the size of the variable portion of the total bonus had increased, the supermarket chain added that all eligible employees are entitled to 20 per cent of the Sheng Siong Group's profit before tax as variable bonus, on top of the 13th month payment (AWS, also known as Annual Wage Supplement).

Staff will receive their total bonuses in the following amounts, depending on their position in the company:

It will also be paid out as part of the chain's February 2020 salary payslip. 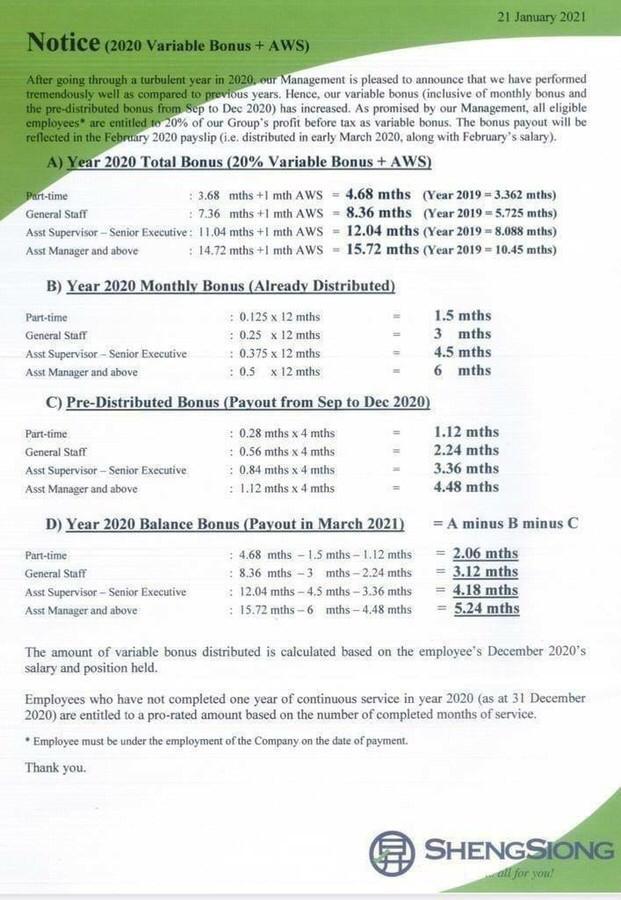 According to Sheng Siong's latest financial update on its website, the company's profits grew about 54.4 per cent on a year-on-year basis to S$31.8 million for the third quarter of 2020, ending on Sep. 30.

Revenue for the three months increased by 28.9 per cent to S$327.3 million, mainly driven by strong demand as a result of the Covid-19 pandemic.

The report further elaborated that despite the lifting of Circuit Breaker, consumers were still cautious while the trend of working from home was still encouraged.

In addition, gross margin was mostly flat at 27 per cent in for the third quarter of 2020 compared with the same period from 2019, as sales promotions in the industry returned gradually to pre-Covid-19 levels after the lifting of the Circuit Breaker.