A mother in Singapore has taken to the Complaint Singapore Facebook page to vent her frustration after she waited for close to two hours for her son to book out of camp to fetch him home. 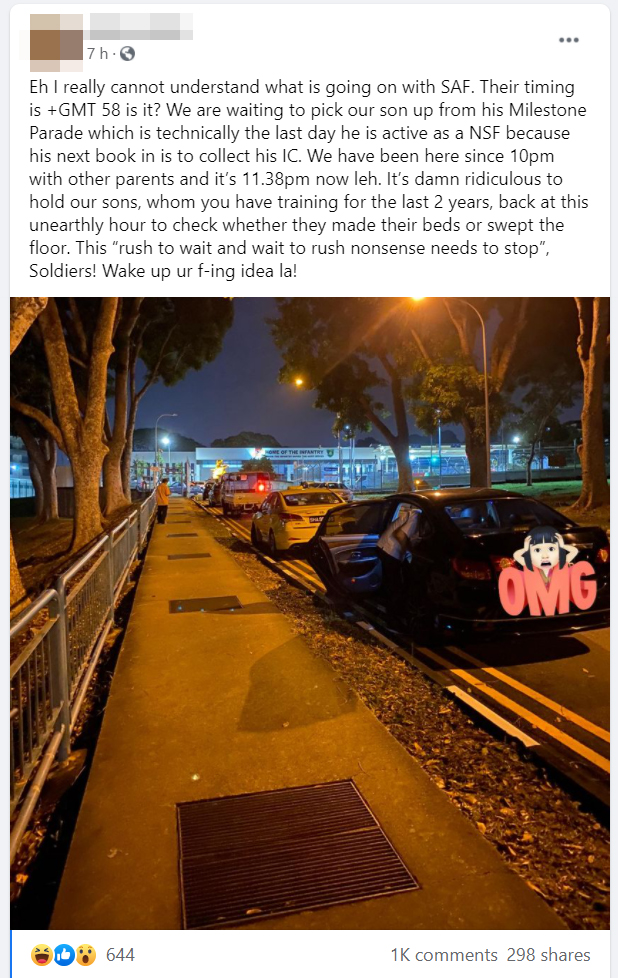 In the post on Saturday, Jan. 23, at about 2pm, the mother wrote about her experience waiting outside the camp for her full-time national serviceman (NSF) son, who had yet to book out at 11:38pm, which she described as an "unearthly hour".

He was, according to her, supposed to be let out at 10pm.

The woman also revealed that her son was serving his final days in camp as an NSF, and she did not see the reason for holding him back after he had already fulfilled two years of national service obligations.

Eh I really cannot understand what is going on with SAF. Their timing is +GMT 58 is it? We are waiting to pick our son up from his Milestone Parade which is technically the last day he is active as a NSF because his next book in is to collect his IC. We have been here since 10pm with other parents and it’s 11.38pm now leh. It’s damn ridiculous to hold our sons, whom you have training for the last 2 years, back at this unearthly hour to check whether they made their beds or swept the floor. This “rush to wait and wait to rush nonsense needs to stop”, Soldiers! Wake up ur f-ing idea la!

The camp appears to be Selarang Camp in Loyang. 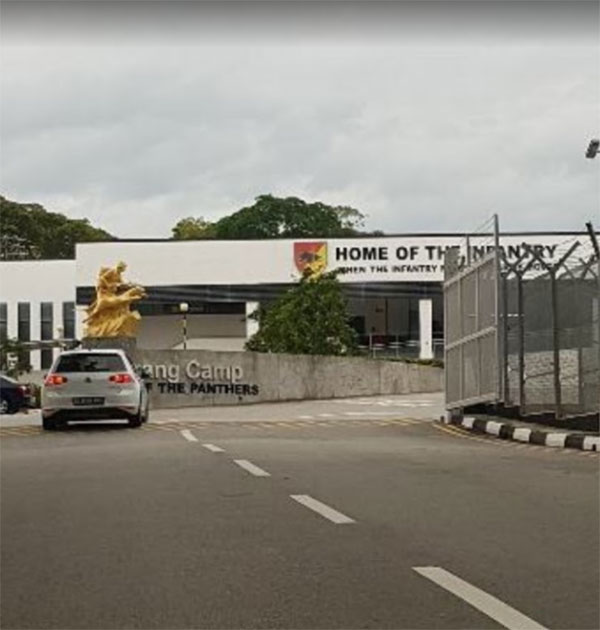 Those who disagreed with the mother responded by saying that NS is not the same as school or adventure camp, and not sticking to timing is par for the course in the military.

The other comments that went further questioned if, as well as assumed that the mother was spoiling her son, and also suggested that the world is a much harsher place outside of camp.

A Facebook page, The Reservist, which is run by former military personnel, responded by saying in a qualified comment, that family members are entitled to pick up a fellow family member in active service, but the military does not owe anyone a living as it is a mandatory commitment over a limited period of time.

Moreover, since it is the last few days of NS, the NSFs might have been undergoing a farewell exercise that would have unintentionally exceeded the time allocated for the event.

Just clarifying a point: the issue here is NOT parents picking up their NSF boys. After all, you got car you are perfectly entitled to go fetch your loved one etc. NO issue there at all. Even in places like US it is very common for families to go wait and pick up their loved ones coming back from deployment etc.

What the REAL issue here is thst this complaint is really bo liao at best. This is the military, and unless it's ops, cannot always expect clockwork timing. Especially when it is a joyous event like milestone parade when he is probably celebrating, saying goodbye, etc with his friends and commanders. Or even enjoying some food and drink.

Yes it is sian to wait for 1.5hours (although you won't complain if it's hai di lao). But this is the military leh. The SAF is not some CCA UNIFORM group where you are obliged to cater to the preferences of parents every time. Yes it is important to engage parents, but first and foremost this is a military. Don't need to sound as though the SAF is really f up and that they owe you for your time waiting.

Counter-argument: Feedback by parent was constructive

In response, a man claiming to be a former military regular spoke in defence of the mother.

He wrote that NS as an obligation to be discharged by all able-bodied males in Singapore has to constantly win the buy-in of all stakeholders, parents included, from generation to generation.

The idea that NS can be a waste of time has already been ingrained, so it is necessary to reduce instances where this notion is further perpetuated.

Whilst I recognise this page aims to promote support for National Service, let’s not be too quick to judge this parent.

I personally feel his/her complaint is reasonable. Whilst I may not have been present or know the details behind the event, I think it’s fair to be annoyed when they have to wait till so late to receive their sons.

National Service isn’t just about the soldiers, the commanders, and anyone who wears green during those two years. If we want parents to be supportive, then we need to consider the repercussions of planning an event that potentially drags on till such a late time.

I’m certain we’ve all had unpleasant experiences of being held back for silly reasons before being allowed to book out. Imagine if there were elderly grandparents waiting to see their grandchildren to have a meal with them.

That being said, I’ve also had soldiers who had NO one to receive them. Soldiers who lived across the island from where their camps were situated, and had to journey home with all their gear by themselves. Instead of a pleasant conclusion to their final day in service, such an experience just reminds them once again why National Service is deemed inefficient and a “waste of time”.

Support for National Service stems from generation to generation. So please. Let’s receive this sort of feedback with open minds. We can do better. We SHOULD do better.

Written by an ex-Regular.