Vera Ho felt that something was amiss. The Belitung native, who was back home visiting her parents, was on the phone with Herman Ho, her husband, back in Singapore. He had been complaining of a headache for three days now and it wasn't getting any better.

If you don't feel good, just call a Grab and go to the hospital, she urged.

"What's Grab? What are you talking about?" Herman mumbled, before he lapsed into unintelligible gibberish.

Alarmed, Vera quickly dialled Herman's cousin in Punggol, begging him to send Herman to the hospital. The cousin immediately cabbed over to Vera and Herman's Sengkang house.

Herman managed to walk down from his second-storey flat to the cab all by himself but as the vehicle sped to Sengkang General Hospital, he lost consciousness.

Over at the hospital, doctors found a blood clot in Herman's brain; he was having a stroke.

As a distraught Vera tried to find an alternative route back to Singapore, having just missed the last direct flight back, doctors in Sengkang General Hospital were monitoring the clot in Herman's brain.

The hope was that Herman's brain would be able to absorb the blood clot on its own. But as the clot grew bigger and bigger, that hope shrank. It became apparent that Herman would need to undergo brain surgery.

Be prepared, the doctors said to Vera, for a possibility that Herman might not make it. And if they opened his head for surgery, his quality of life would drop. He might not regain consciousness, or he might lose his sight — the possibilities were endless and grim.

"My entire world just shut down," says Vera. "I was so stunned, I kept crying."

It's been 20 months since Herman's stroke, but the trauma from it clearly remains. Vera still freezes whenever she hears an ambulance's siren.

In the end, Herman was transferred to the Singapore General Hospital where he underwent surgery to remove part of his skull, relieving the built-up pressure on his brain. Miraculously, he made it, but the injury to his brain left him with a few impairments.

For one, Herman could not open one of his eyes. He also could not walk by himself. But it was the next impairment which left him literally speechless.

The 39-year-old — a polyglot who spoke English, Mandarin, Bahasa Indonesia, Hakka, Teochew, Cantonese, German, and Japanese before his stoke — woke up eight days later learning that he had lost the ability to speak all of them.

For two whole days, he spoke nothing but gibberish. Then on the third day, he started blabbering in Hokkien.

"So everybody I keep speaking Hokkien only. After five days, it turned again, the Hakka all correct already, but still a little bit difficult to talk," says Herman in fits and starts.

Herman speaks slowly, and it's very clear that he is trying to piece together the right words. Occasionally, he jumbles up the order of the words in his sentences. It's a result of the rare language impairment condition that he has, called aphasia.

Caused only by injury to the brain, aphasia affects either one's speaking, comprehension of speech, or reading and writing — or all of the above. In Herman's case, he is able to comprehend what we're saying, but it's hard for him to respond and enunciate his words fluently.

According to Aphasia SG, about 2,500 individuals are diagnosed with aphasia in Singapore annually. 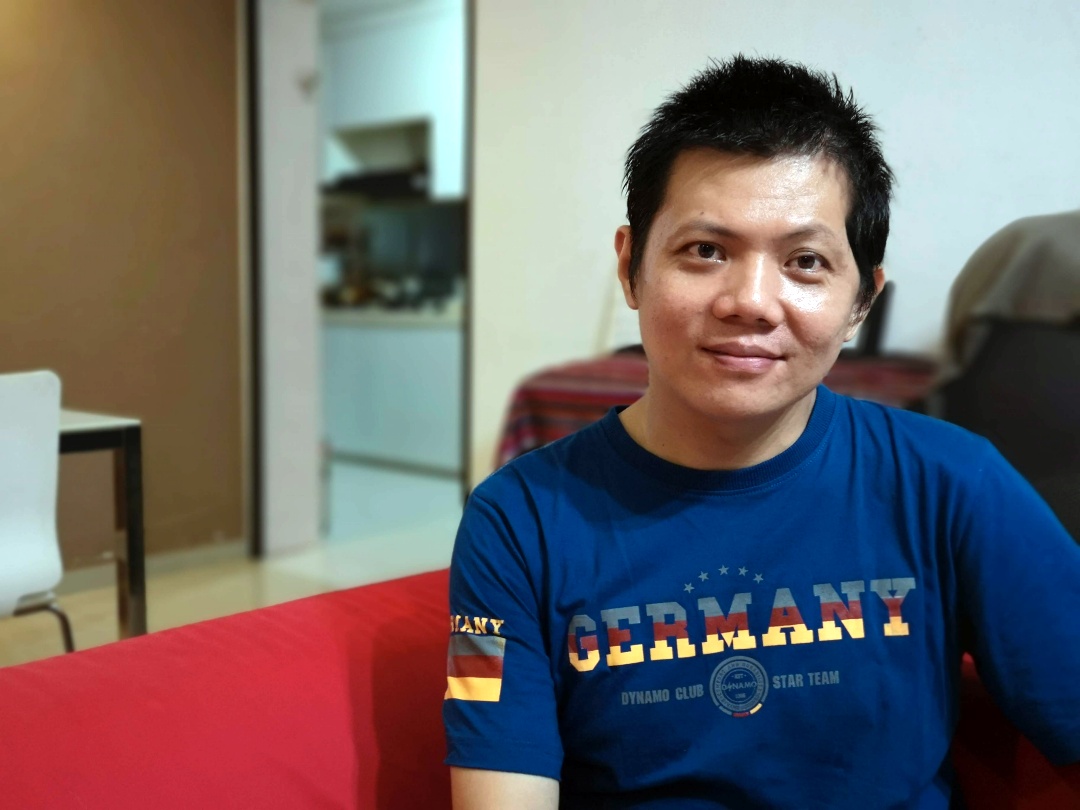 Hokkien, Hakka, Bahasa Indonesia — these languages slowly came back to Herman as his brain rewired itself after the stroke. But even now, he cannot speak as fluently as he did before.

Languages such as English, German, Japanese, and Mandarin remain a challenge because they are not his first languages, he says.

After a three-week hospital stay at SGH, Herman was transferred to Bright Vision Hospital to recuperate. His recovery, says Vera, was a real miracle:

"When the doctor told me he cannot walk right, immediately the next morning when I reached hospital, he's walking and running, go to the bathroom shower by himself.

When I accepted that he cannot see, his eyes cannot open, then immediately opened you know."

While he had a marvelous physical recovery, Herman struggled with having a piece of scalp gone as well as the trauma of having a stroke and the subsequent loss of his speech.

"Easily angry, easily stressed, keep asking sometimes, why, why, why, so many questions."

He wore a protective cranial helmet in public (which looks just like a cycling helmet, for those unfamiliar with it) which helped to hide the the soft dent on his head. However, he was prone to angry outbursts, which he often took out on his family.

But here, Vera is quick to jump in, insisting that her husband's emotional outbursts were due his medication and his stroke injury ("The damage affected the part of the brain that controls emotion").

Herman credits his family for being his pillar of support, and being very understanding towards him, especially when he was moody and frustrated. His wife and daughter would take the time to talk to him and encourage him.

His speech therapy helped as well, and Herman found solace in meeting other people with aphasia through the monthly Chit Chat Café, a support network by Aphasia SG.

Being able to get out of the house to run simple errands — like picking up groceries at the supermarket ("don't need to talk, just buy things!") — also helps to keep his mind off unhelpful rumination.

Working as a stroke survivor

On the work front, Herman is thankful that his company reallocated him to a new part-time role, which he started in October 2010, seven months after his stroke.

The former IT consultant used to communicate with associates from other countries. His new role requires him to communicate less, but Herman is adamant that he is able to do most of the work.

He will have to read through his emails two times or three times now before shooting off a reply. Presentations, which he used to do well before his stroke, is a tad difficult today as well, but other than that, Herman is absolutely sure that he is able to do the job.

Because of his new job scope, his pay has also been cut by half but Herman doesn't mind.

"But it's okay. I feel better if I got activity to do again...Because I'm sick person. So I'm okay if no more opportunity to go overseas, as long as I still can work lah."

Unfortunately, not every aphasia sufferer is as lucky as Herman. Many get terminated from their jobs because they cannot perform like before, says Vera, which in turn impedes their emotional recovery:

"It's not about the money now. It's about how they feel like 'I'm not useless'. I'm still alive. These things can't be given by the family. I can't give [Herman] the secure feeling of his job."

The loss in confidence also affects the recovery of stroke survivors.

"They're physically deteriorating bit by bit, bit by bit, and at the end they have to use the wheelchair. This is why I think it's very important for the employer to keep them," adds Vera.

Today, Herman's still struggles with speaking but "it's much much better". Thanks to a cranioplasty in August 2020, there's no longer an obvious dent in his scalp.

To the untrained eye, he looks quite normal, much like the next guy, except for a patch on his head where his hair has yet to grow out.

If I do see you again, I hope you'll be much, much better next time, I say.

"Yeah, hopefully lah, and hope my hair will be bit longer and maybe it can be better," he grins.