A foodpanda customer seeking to order an early morning meal was left frustrated and hungry after a conversation with support staff.

The customer ended up having to coordinate her own customer support, toggling between separate conversations with the rider assigned to deliver her order, and the support staff.

To make matters worse, the support staff appeared to be able to offer little more than template responses.

Even after being told by the customer that the restaurant could not prepare the order, the support staff responded saying "your order is being prepared".

When asked to cancel the order, the support staff declined and repeatedly said "please wait for your order", despite even being told that this would mean that the rider would need to make a trip to the customer's location without food.

Screen shots of the support staff's infuriatingly sterile replies were uploaded to Facebook by user Kitty Teo on Jan. 25, and have since been shared more than a thousand times.

Restaurant could not prepare items, yet support did not allow cancellation of order

According to the screen shots, the customer was asked to cancel her order, and submit a new order.

This was apparently due to the fact that the restaurant in question, a McDonalds outlet, was not able to prepare the specific items the customer wants, as they have changed their menu.

This resulted in the rider being left waiting at the restaurant, unable to collect the non-existent food.

The customer duly relayed this information to foodpanda support, requesting assistance to get the original order cancelled.

The reply that she received, however, did not appear to reflect an understanding of these facts: 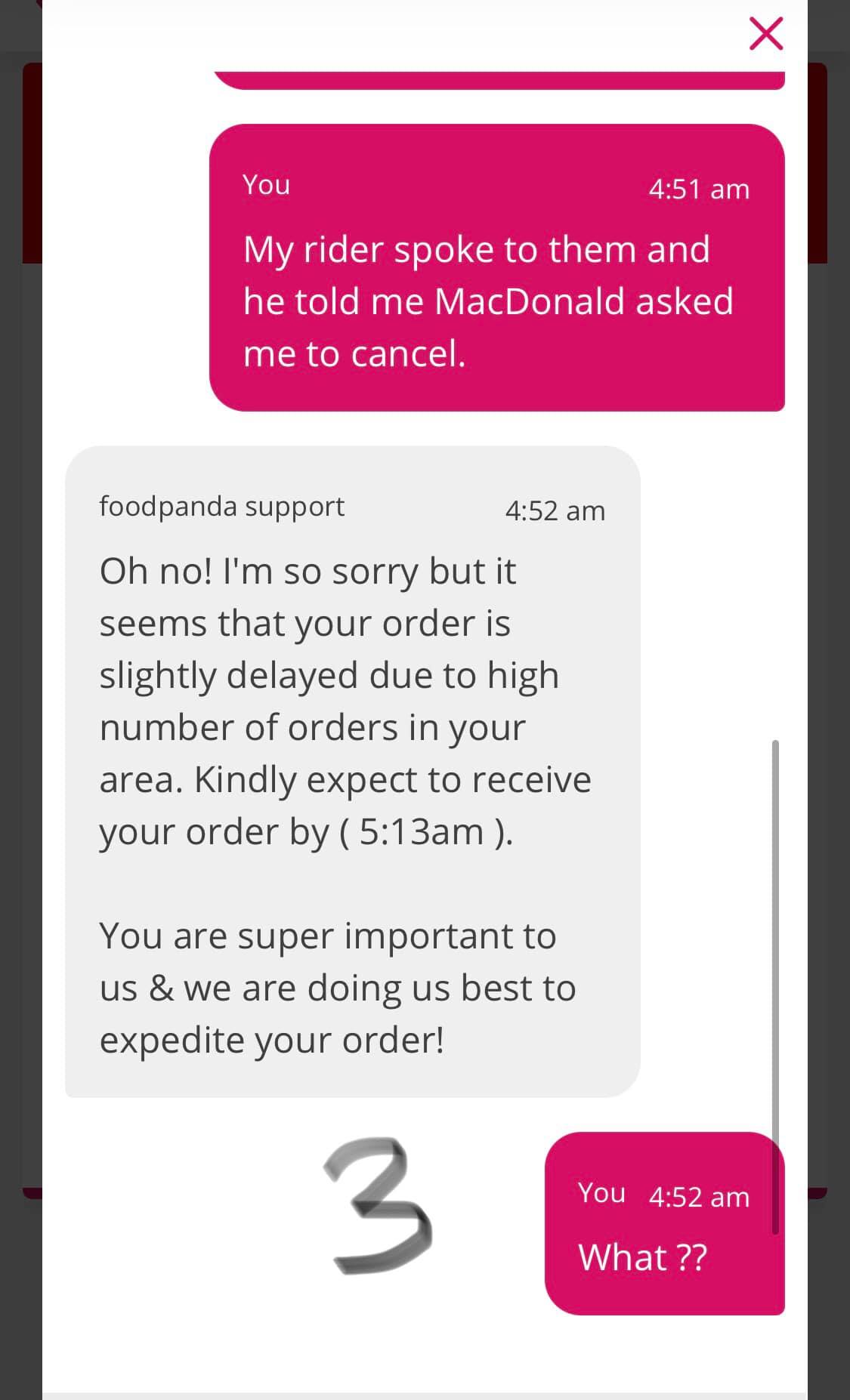 The support staff's apparent stock responses made it appear that they prefer the information provided on the foodpanda system over what the customer was saying.

The foodpanda support staff replied that the order was "being prepared by the restaurant", a line that would be reiterated again in subsequent messages.

Even screen shots of the customer's conversation with the rider seemed to go unheeded by the support staff: 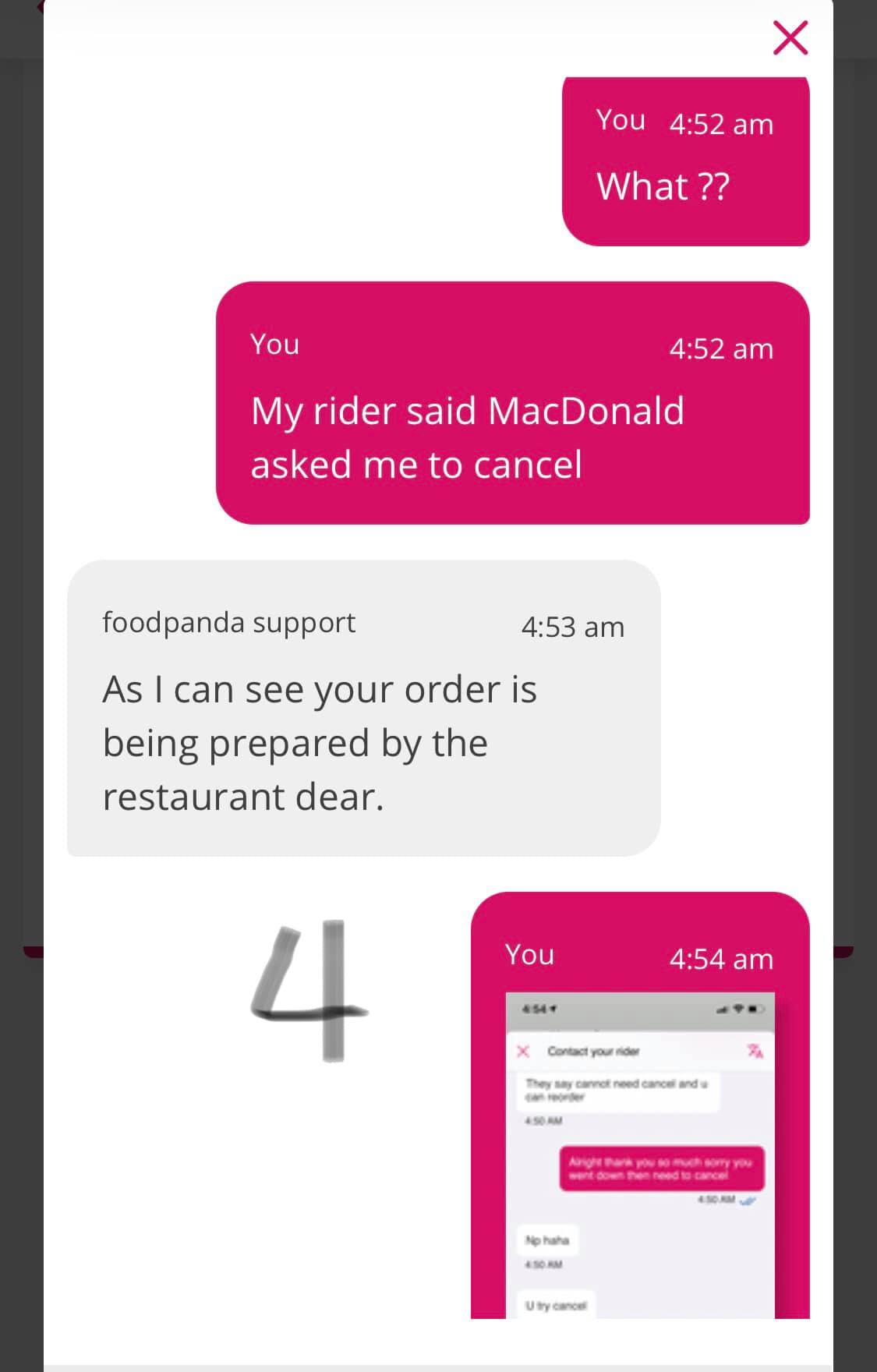 Customer repeatedly told her order was being prepared

After sending screen shots didn't work, the customer asked the support staff to check with the rider directly, only to be told once again that the order was being prepared: 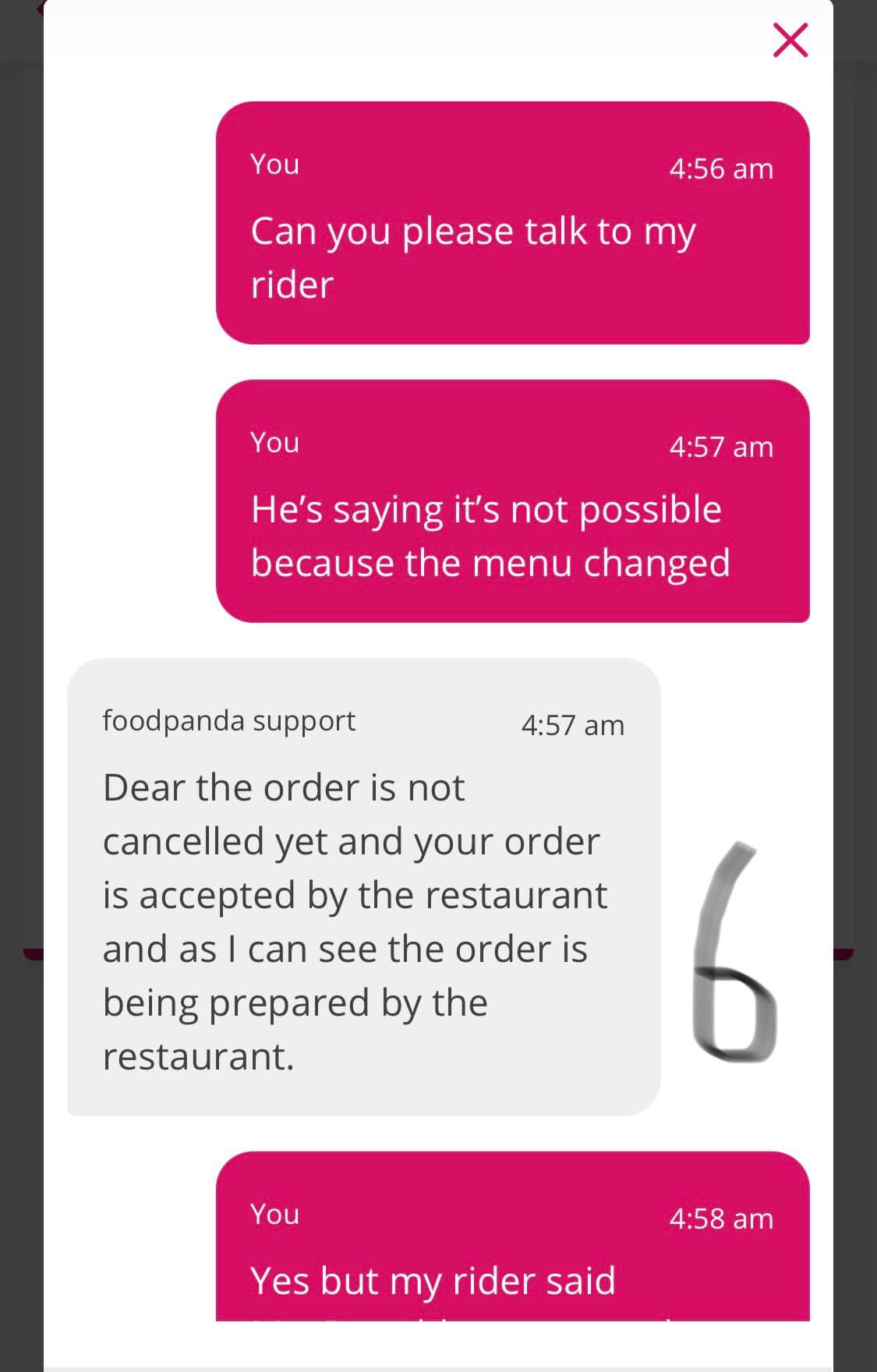 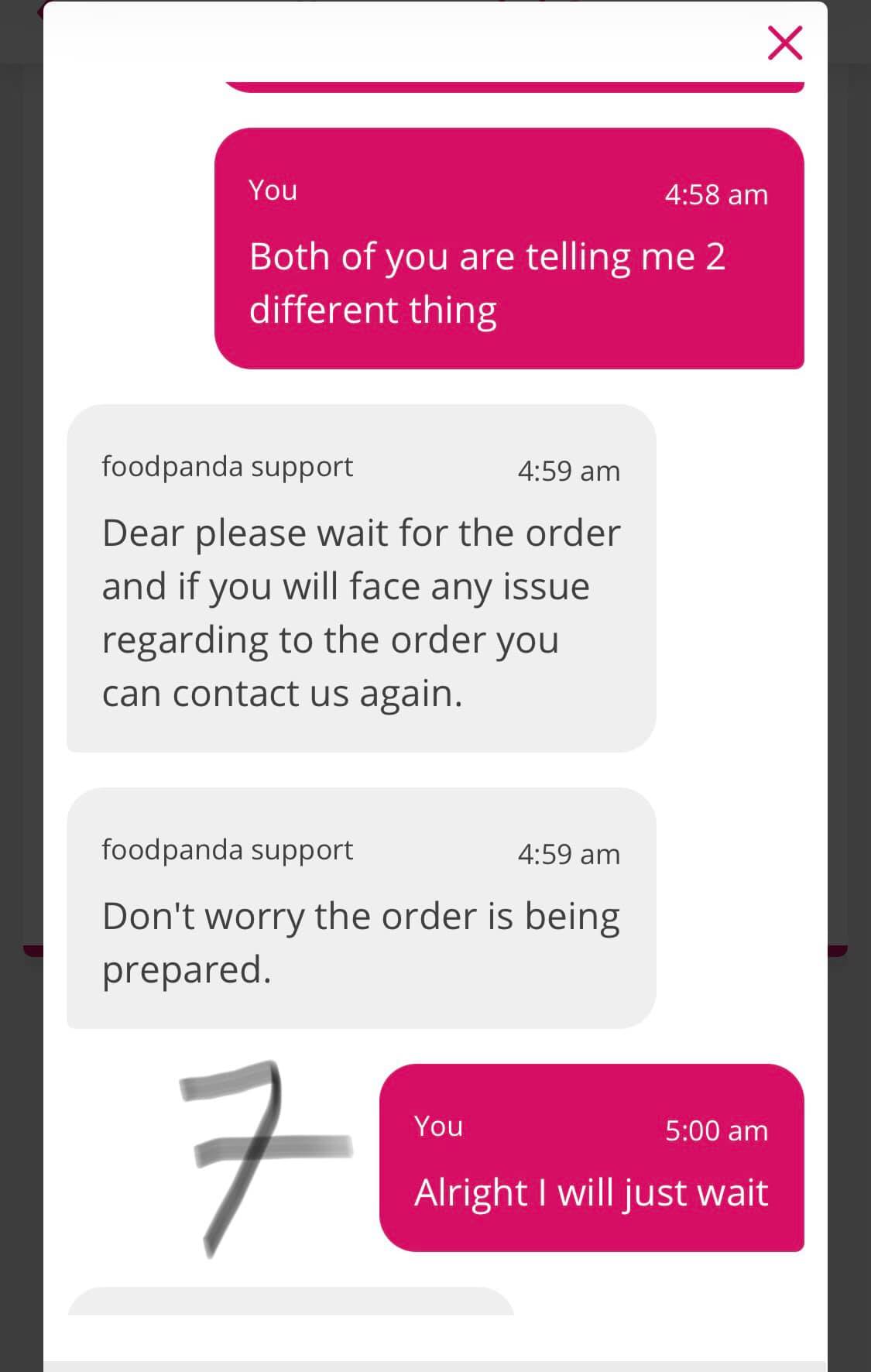 Relaying this information back to the rider, the customer was again informed that the McDonalds outlet that was tasked with preparing her meal was simply unable to do so, as they had changed their menu and were only selling breakfast items. 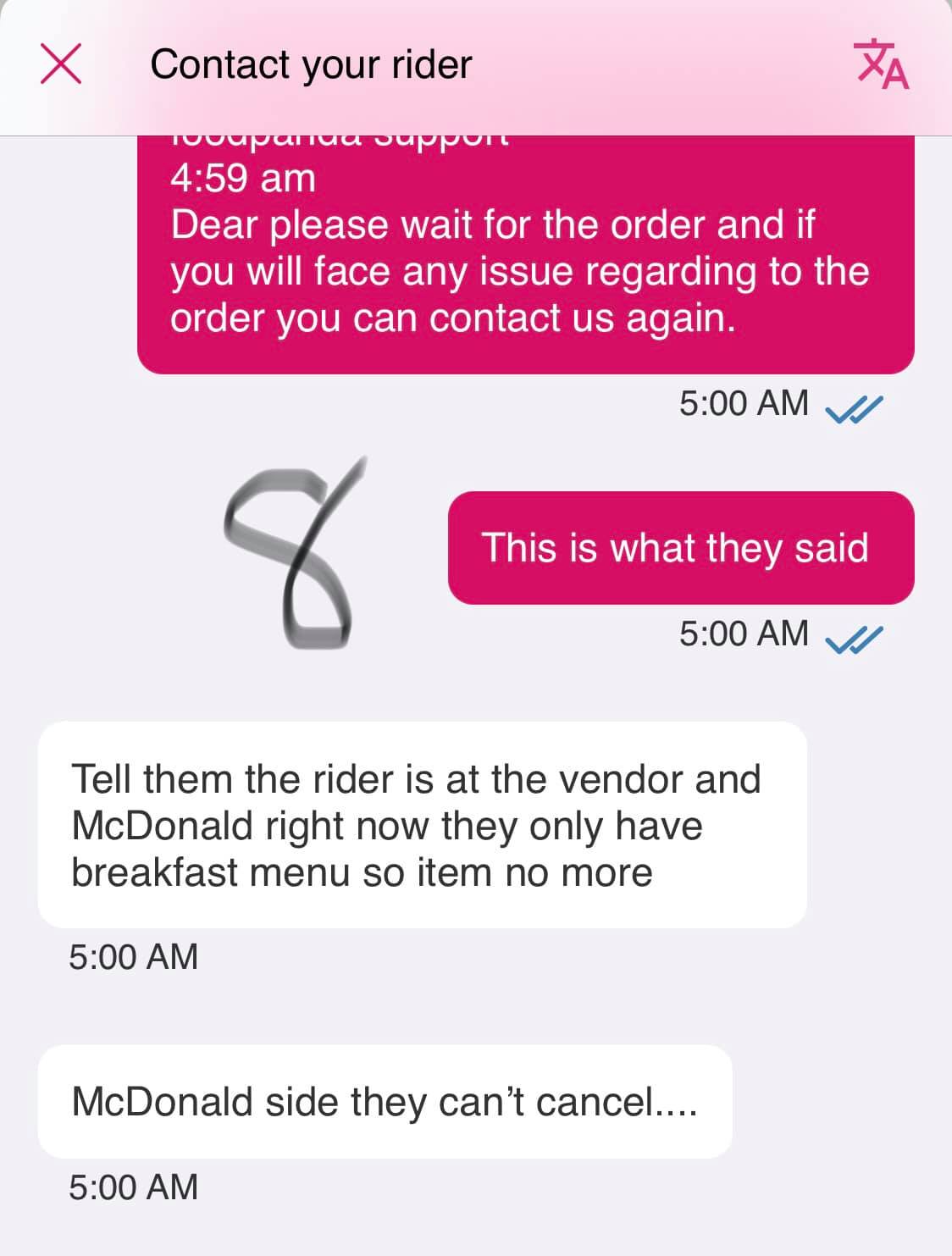 Rider could not cancel as it would only create more problems

The rider then explained the only option was for the order to be cancelled by foodpanda's Help Centre.

While he could cancel the order on his end, this would result in the order getting assigned to another rider who would then have to deal with the same situation. 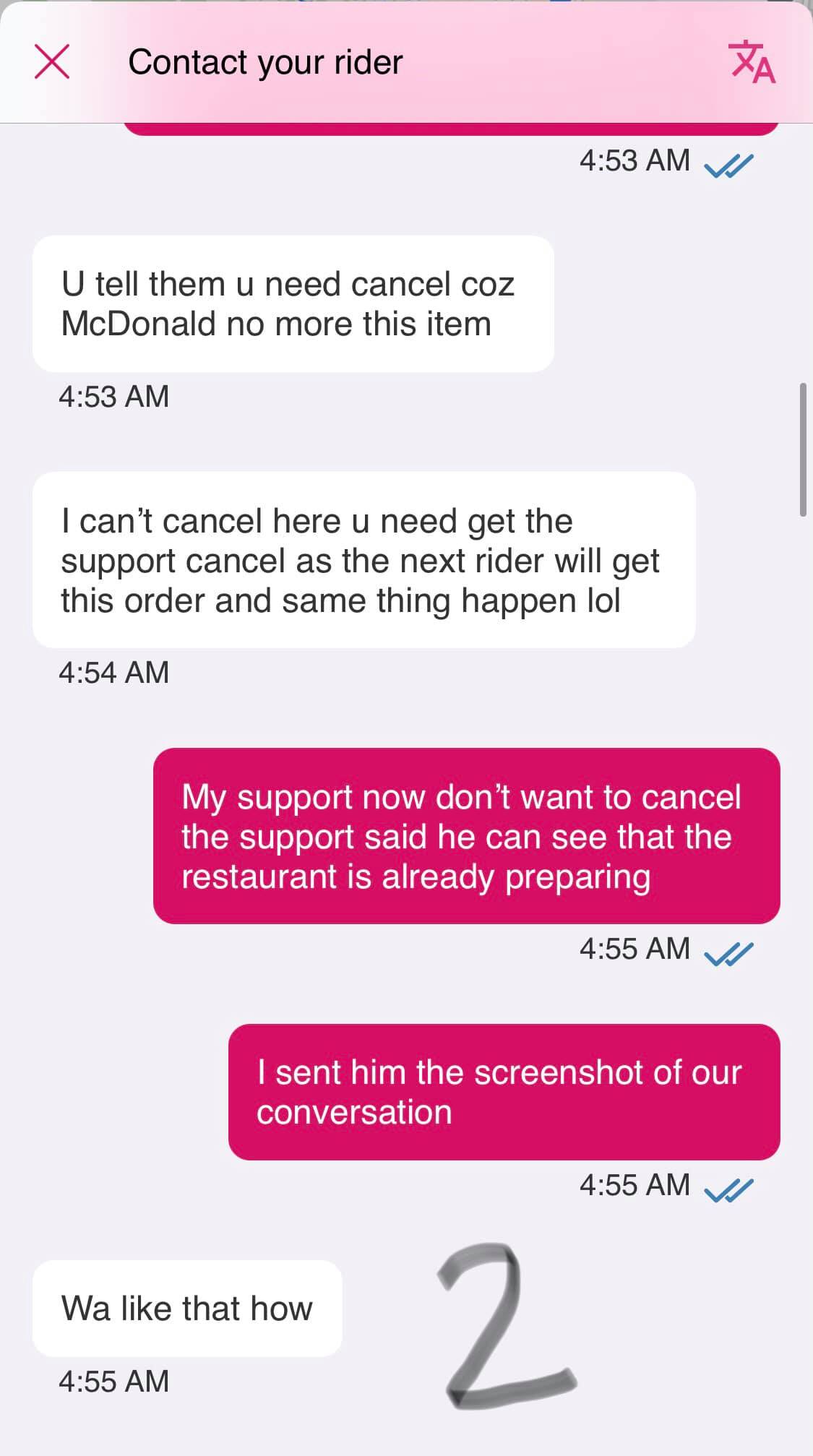 Rider decides to complete the delivery trip without food

Apparently, between the rider and customer, a decision was made for the rider to "complete" the delivery trip without actually carrying any food from the restaurant.

The customer then turned to support for help in getting a refund: 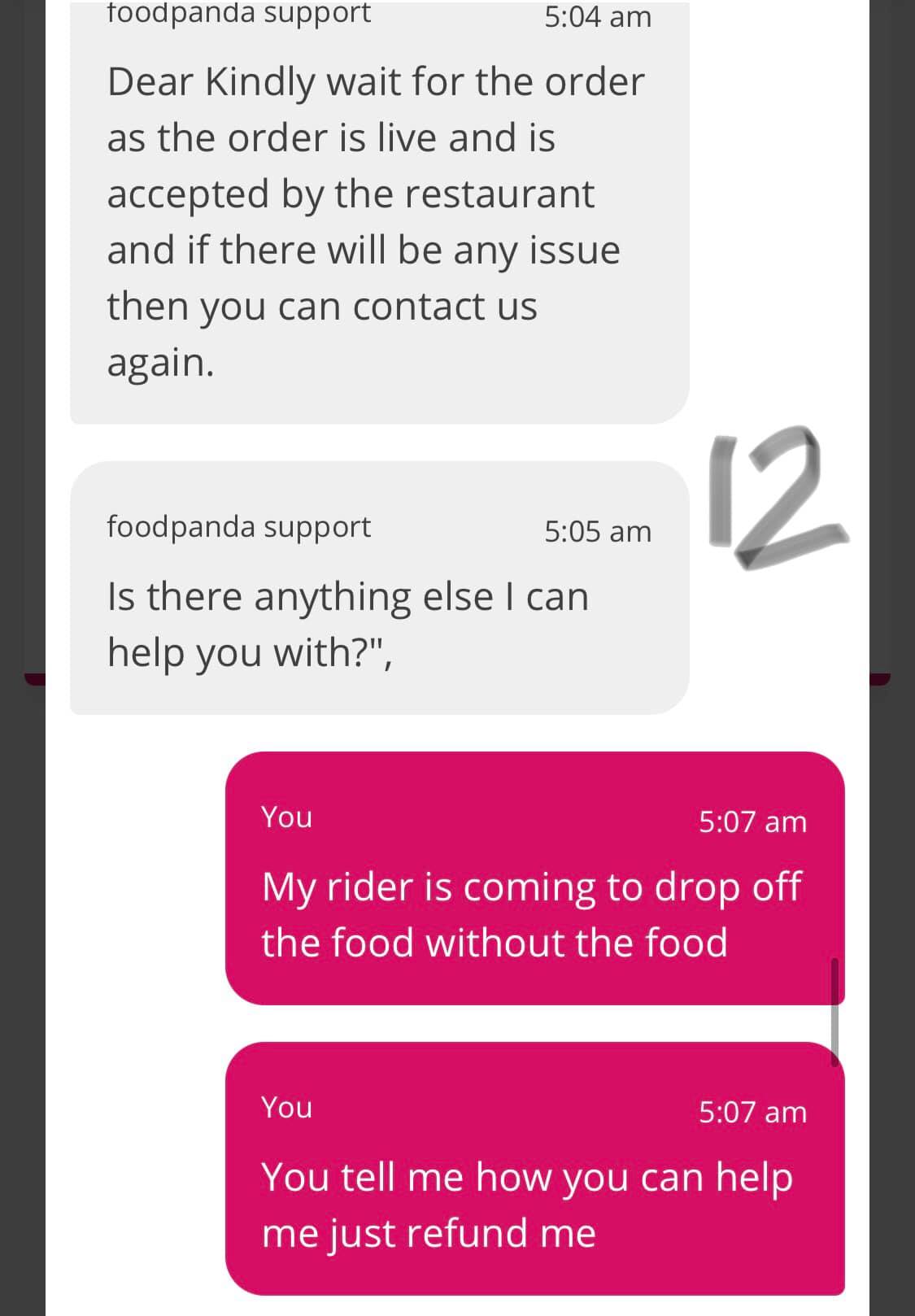 However, the reply once again failed to address the situation, with the support staff insisting that the order had been picked up. By this point, the customer's thus-far professional tone gave way to full-blown incredulity:

Nonetheless, even this outburst could not evoke a more sensible answer, as the support staff seemed to simply move on to dispensing answers from another list of template replies, this time regarding cancellation.

According to the reply, cancelling the order would mean that the customer would have to pay in full: 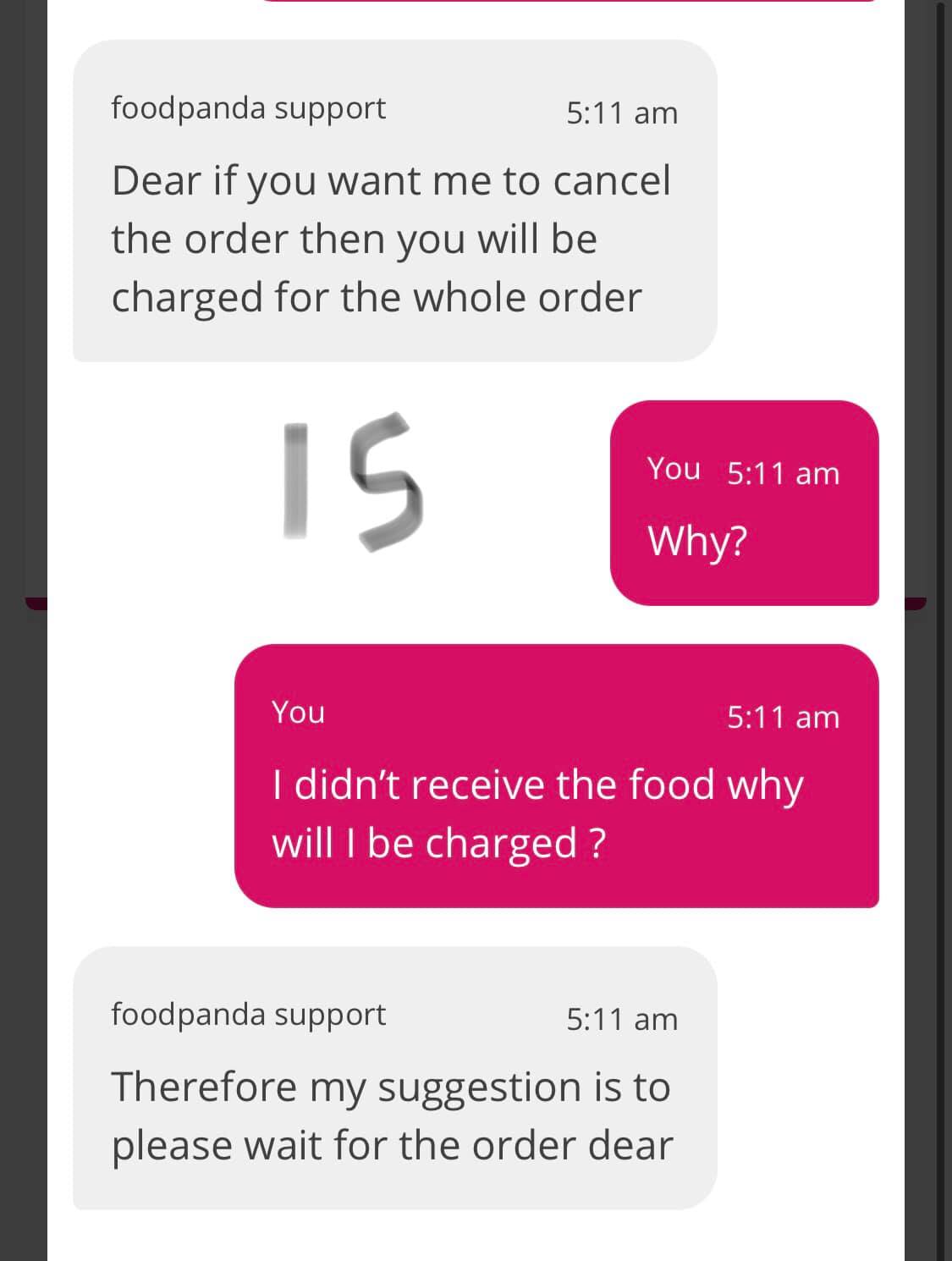 foodpanda "truly sorry" for the incident

When contacted by Mothership, a foodpanda spokesperson said that they were "truly sorry for the frustrating incident", adding that it was in touch with the customer and was investigating the matter.

"We are truly sorry for the frustrating incident that both Ms Teo and our rider experienced. We are currently investigating the matter and are in touch with Ms Teo to rectify the issue. We take customer feedback very seriously and are taking steps to ensure that protocols are adhered to by our customer service teams, riders, and merchant partners to ensure the best possible experience for everyone."