You might have heard of the famous 'Beads Uncle' who puts on public performances by swinging chains of beads around his neck and waist at Orchard Road.

Here are some videos of "Uncle" Oh Ow Kee in action:

On Jan. 24, a TikTok video went viral, claiming that Oh had passed away. 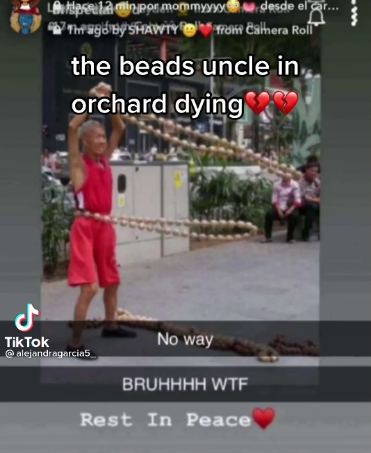 Soon after it was uploaded, a similar video circulated on TikTok again. The video, which was seen by Mothership, stated that Singapore had "lost an iconic figure".

However, it appears to have been deleted as of Jan. 25.

In response to queries from Mothership, Jonathan Goh, co-chair of Buskers' Association Singapore, said that Oh is still alive and well.

He had called Oh on Monday (Jan. 25) afternoon.

According to Goh, Oh is still practising his craft during his free time, but he has not been able to perform at Orchard Road due to Covid-19 restrictions.

Live busking performances has not returned to its normal state due to the pandemic, although busking pilots at specified venues were carried out from Dec. 4, 2020 to Dec. 19, 2020.

In his reply, Tong said: "My ministry is also keen to allow busking to resume under safe public health conditions."