An American travel influencer went viral for her tweets promoting a seemingly better and easier life in Bali as a foreigner, as compared to life in Los Angeles.

However, she has been deported back to the U.S. for a visa violation, Tempo reported.

The self-described digital nomad, Kristen Antoinette Gray, had promoted an e-book titled "Our Bali Life is Yours".

She said the book is a guide that elaborates how she and her girlfriend, Saundra Michelle Alexander, managed to settle in Bali.

The book, which she was selling for US$30 (S$39), contains "direct links" to their visa agents to help those interested "get into Indonesia during Covid", she said.

"We're just two black girls trying to give knowledge and build a community of humans who know their divinity and want to thrive vs survive," she added.

She further expanded on the benefits of moving to Bali, crediting the Indonesian province for its "safety", "low cost of living", "luxury lifestyle", "black community", and for being "queer friendly".

Indonesians angry at foreigners seen as taking advantage of their country

But Gray's comments sparked furore among Indonesians who accused her of, among many things, asking other foreigners to find a "sanctuary" in Bali, even though Bali is struggling with Covid-19 cases.

A post shared by What Is Up, Indonesia? (WIUI)⁷ (@whatisupindonesia)

Some social media users also argued that since she has been living and working in Bali, she should be paying taxes in Indonesian rupiah to the local government.

In response to a tweet asking if they are paying local taxes, Alexander said "Why would I have to pay taxes if I never made IRD? I pay American taxes for making USD." 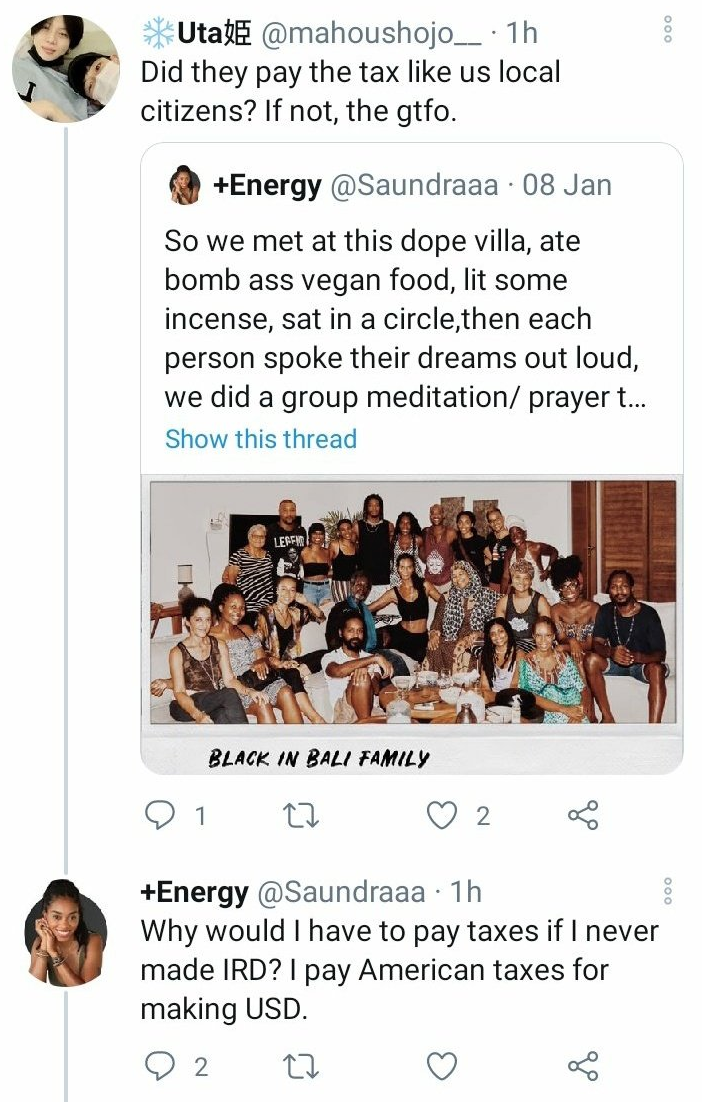 This resulted in some backlash.

ACTUALLY we don’t care about your skin color but the audacity to overstay ur tourist visa, work from here and not pay the obligatory income taxes for foreigners who stayed more than 6 months, encourage people to travel & live a luxury living w/ low cost in bali during pandemic 🖕 pic.twitter.com/Lqg9CMOQgR

How have you ensured that moving to Bali and encouraging others to do so isn't contributing to gentrification? (i.e raising prices so natives aren't kicked out/forcing Balinese to learn English as opposed to expats learning Bahasa, etc.?)

why do americans think their peace of mind is worth gentrifying a whole island and pushing locals out of their own lands and into low-paying jobs bc now everything there is built to cater to foreigners https://t.co/QWiG2HUKbw

After news of her pending deportation was released, many netizens "celebrated" the move.

How it started How it's going pic.twitter.com/QAHcDxfC9T

The Indonesian government announced in a statement on Tuesday, Jan. 19, that the two American citizens had violated their visa stay by conducting business and working in Bali.

The press release from the Ministry of Justice and Human Rights stated that Ms Gray violated the 2011 Immigration Laws article 75 for endangering public safety by inviting people to Bali during a pandemic, and article 122 for violating the purpose of her visa.

They were staying in Bali on visitors visas, which are for foreigners taking a vacation in Indonesia, Tempo reported, citing Jamaruli Manihuruk, head of the Law and Human Rights Ministry’s Bali branch office.

Gray's visa was due to expire on Jan. 24 after having been extended on Dec. 22 last year.

Both Gray and Alexander have been banned from entering Indonesia for the next six months.

The government further said that her effort at getting more foreigners to come stay in Bali at a time when it is still trying to contain the pandemic was unsettling to the public.

Indonesia has imposed a ban on international visitors until Jan. 25 in a bid to stem the the spread of the Covid-19 pandemic.

Gray says she is "not guilty"

Gray, whose Twitter and Instagram accounts were locked after the controversy, dug in her heels, telling Balinese press that she is "not guilty".

In her statement, she also appeared to hit back at criticisms, saying she had not overstayed her visa, and that she had not made any Indonesian rupiah in Indonesia.

Instead, she believed that her deportation was personal, saying the decision was made due to her statement about LGBT issues.