A 64-year-old Singaporean man, Abdul Rashid Sahari, has been infected with Covid-19 while he was working in Jakarta.

He has since been brought back to Singapore and is in the intensive care unit (ICU) at National Centre for Infectious Diseases (NCID).

His wife, 56-year-old Safiah Rawi Abed, who was in Jakarta with him, has also tested positive for Covid-19.

The couple has three daughters who are all living in Singapore.

Rashid had been working in Jakarta for a number of years to support his family.

His wife had joined him earlier this year to keep him company.

Rashid went through a Covid-19 test every 10 days, as instructed by his workplace.

But a day later, he began experiencing Covid-19 symptoms such as sore throat and fever.

He subsequently took another Covid-19 test.

While waiting for the results of the examination, his body condition became weaker.

However, he was told to quarantine and rest at home as there wasn't any space in the hospital.

His wife was told to do the same, but her condition was not as bad as his.

Two days later, his health worsened and he went to a clinic. They found that his oxygen level was low so he was sent to a private hospital in Jakarta.

Less than 48 hours after hospitalisation, Rashid's condition became so critical that he could not speak.

Haikel told Berita Mediacorp that his family in Singapore had trouble contacting the hospital.

On the first day his father-in-law was admitted to the hospital, Haikel and his family did not receive any news or updates from the hospital.

However, seeing Rashid's health condition worsen through video calls triggered a lot of fear and sadness in his daughters. 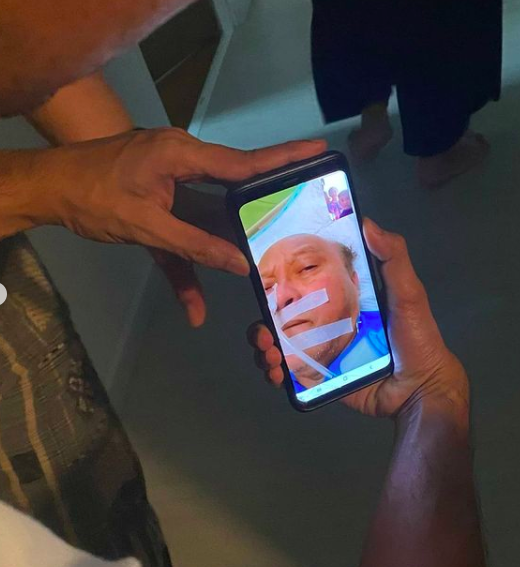 Haikel said, according to Berita Mediacorp:

"At that time, he was coughing and experiencing shortness of breath. But he wanted me to check on Mama's condition instead. Three hours later, we got a call from the doctor who said that his condition was quite bad.

Bringing them back to Singapore

There was only one way to bring Rashid home. He had to be transferred by air ambulance, which is quite expensive.

The method of using the special private aircraft, which is equipped with ventilators and various medical equipment, costs more than S$66,000.

This does not include hospital bills and the cost of treatments.

But as a result an online fundraising appeal, Haikel managed to raise a donation of S$88,000 from the public for the emergency.

On Dec. 7, Rashid landed safely in Singapore. His wife Safiah arrived a day later in a different plane.

Although Rashid and Safiah are currently in Singapore, they have yet to meet with their daughters, son-in-law and three grandchildren.

Safiah is currently in a community isolation facility, although as she is gradually recovering.

Rashid is in the NCID ICU room. He could only be seen from a distance, separated by a glass wall.

His family was also able to talk to him through the intercom. Although he could not answer, Haikel believes that he could still hear them.

Two to three days ago, the family saw Rashid reacting.

"We could see him raising his hand, he nodded. From there, we are confident that he is recovering," said Haikel.