A four-room Tiong Bahru resale HDB flat has been given a new lease of life after it was renovated into an eclectic, colourful, and loud dwelling with pastel hues. 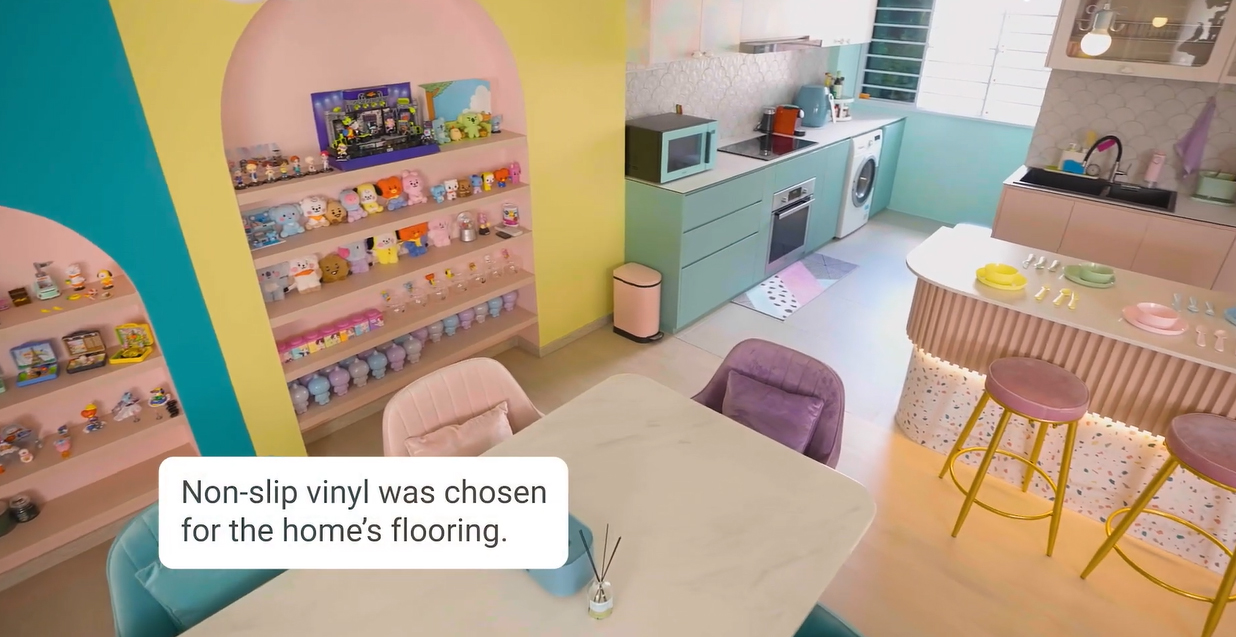 It was completed by Free Space Intent (FSI) in July 2020 after the flat was purchased in February.

The five-month time span taken to complete the renovations, which cost S$66,000, was due to the Covid-19 outbreak.

The homeowner is a woman who told Qanvast that she had been renting a place to stay for the past 19 years when she came to Singapore to pursue her studies.

The vibrant splashes of colour in her 106m² home now is a playful and wholehearted nod to K-pop band BTS, as the flat owner became a huge fan of the group after a trip to South Korea in 2018.

She told interior designers she met before renovations: “I can take it, my tolerance (for bright colours) is high!” 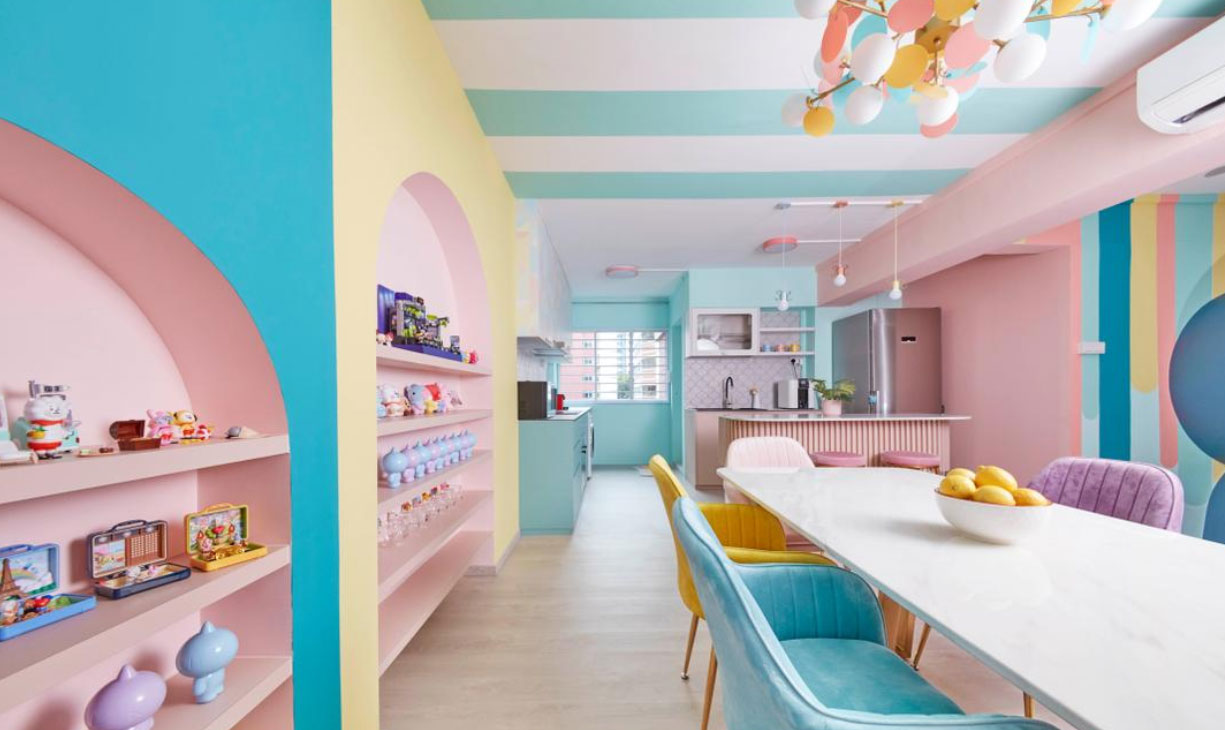 The woman added that she wanted a flat of her own as it would not be financially wise to rent for the long term and she needed more space to keep her BTS merchandise.

She currently displays her BTS and BT21 collectibles at the recessed display shelves in the dining area saturated with contrasting colours. The resale flat was completed in 1995.

Prior to renovation, it was a drab space. 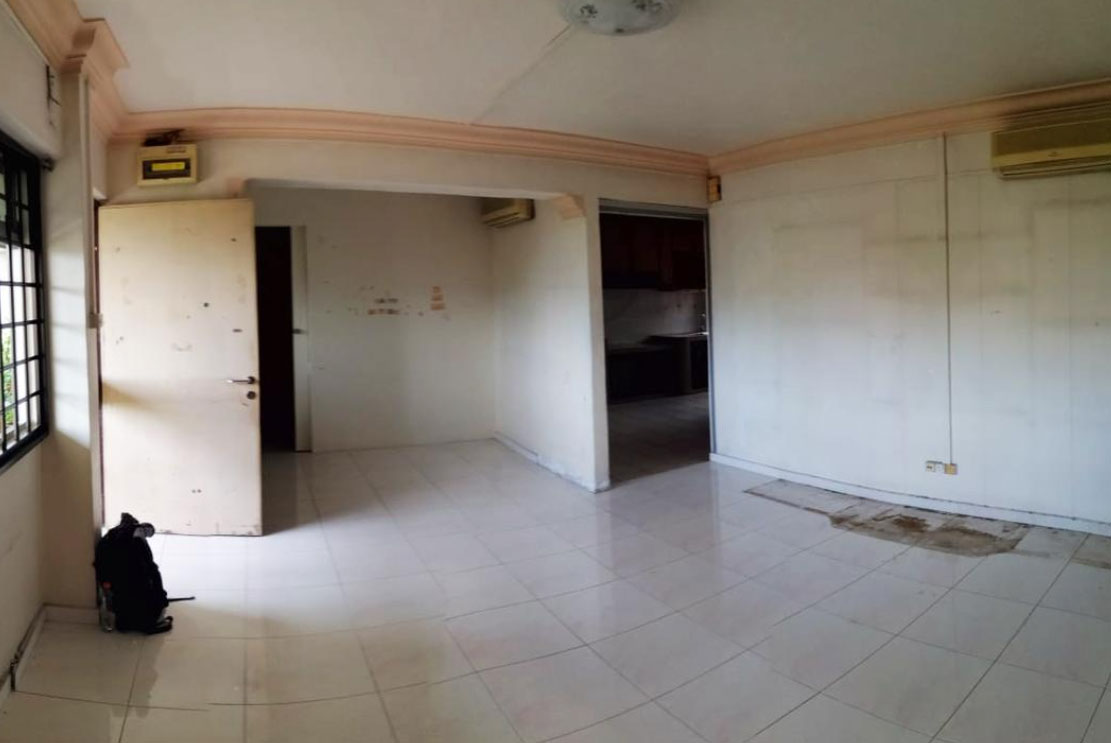 According to the interior designer, the master bedroom was expanded slightly and walls were reconfigured to provide space for the open concept kitchen with an island. 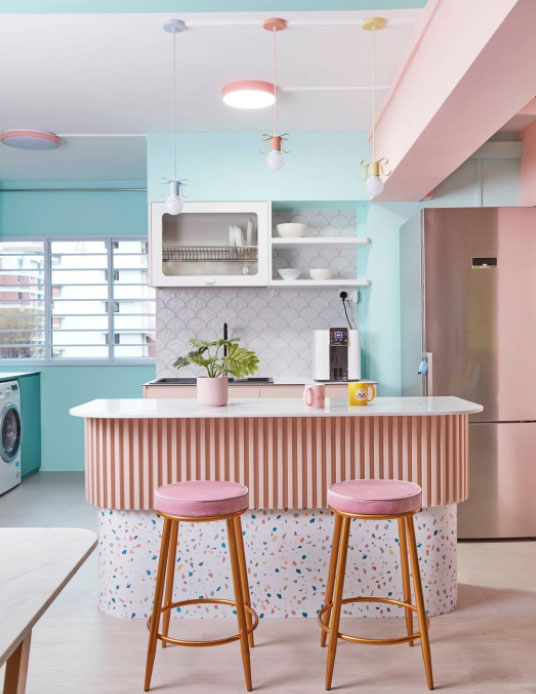 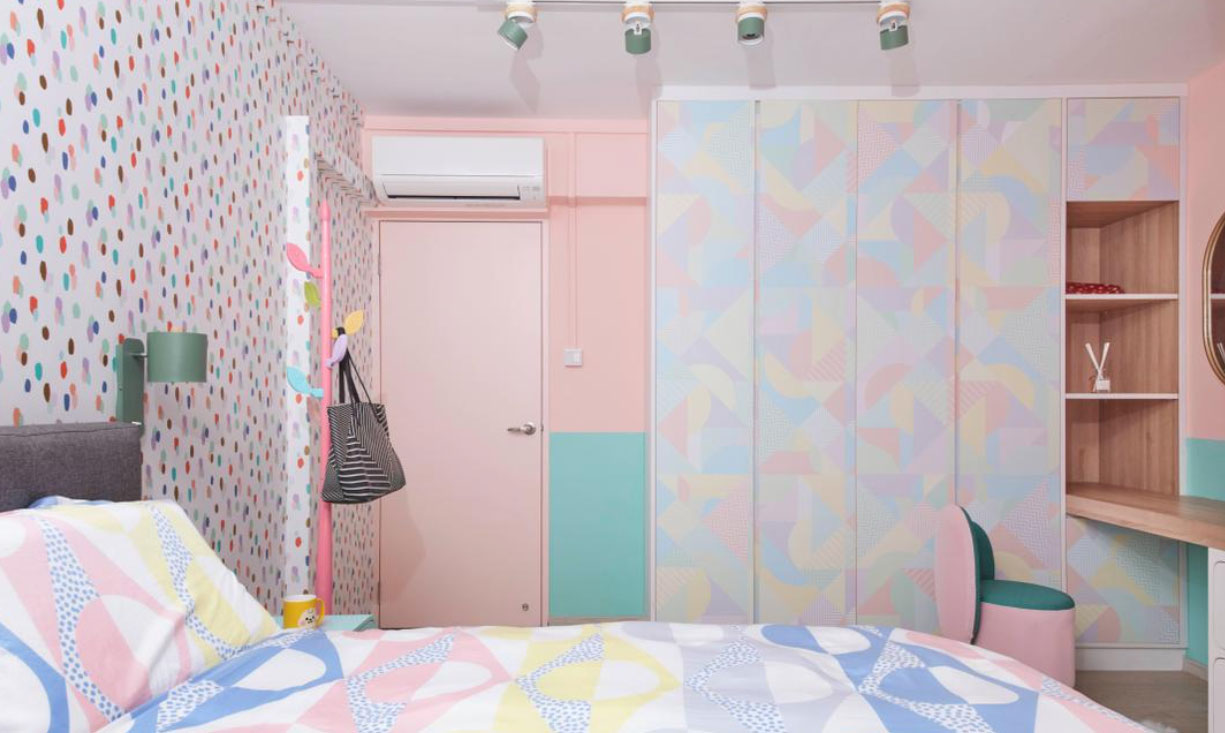 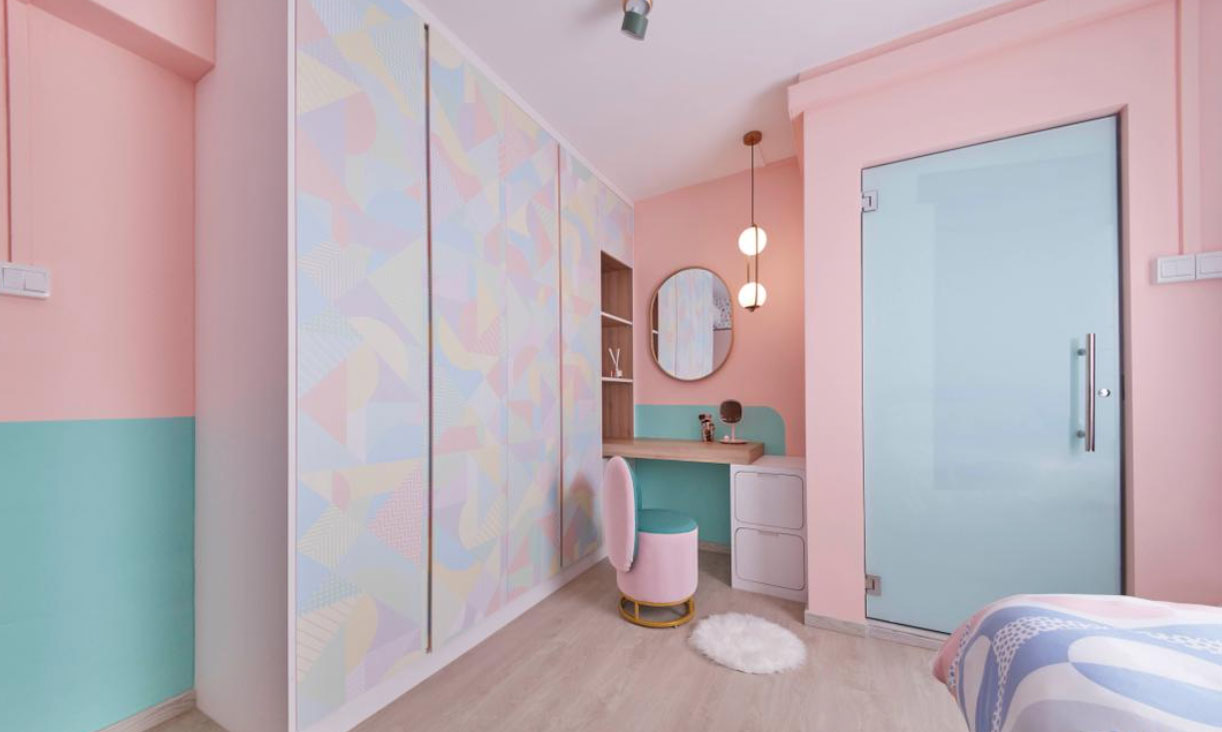 Some finishing touches that add to the explosion of colours include the bathroom’s drainage pipes that are painted pastel yellow, as well as colourful laminates for the top row of built-in kitchen cabinets and plain ones at the bottom. 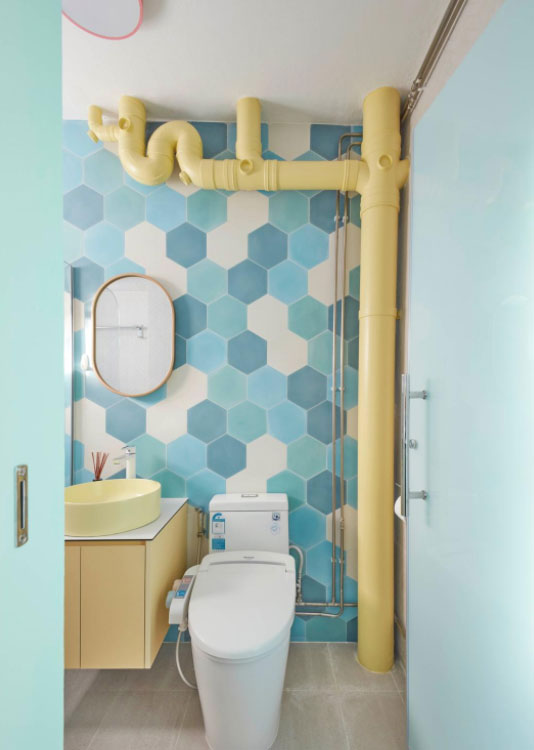 A friend of the owner gave the idea for the white-and-green ceiling stripes. 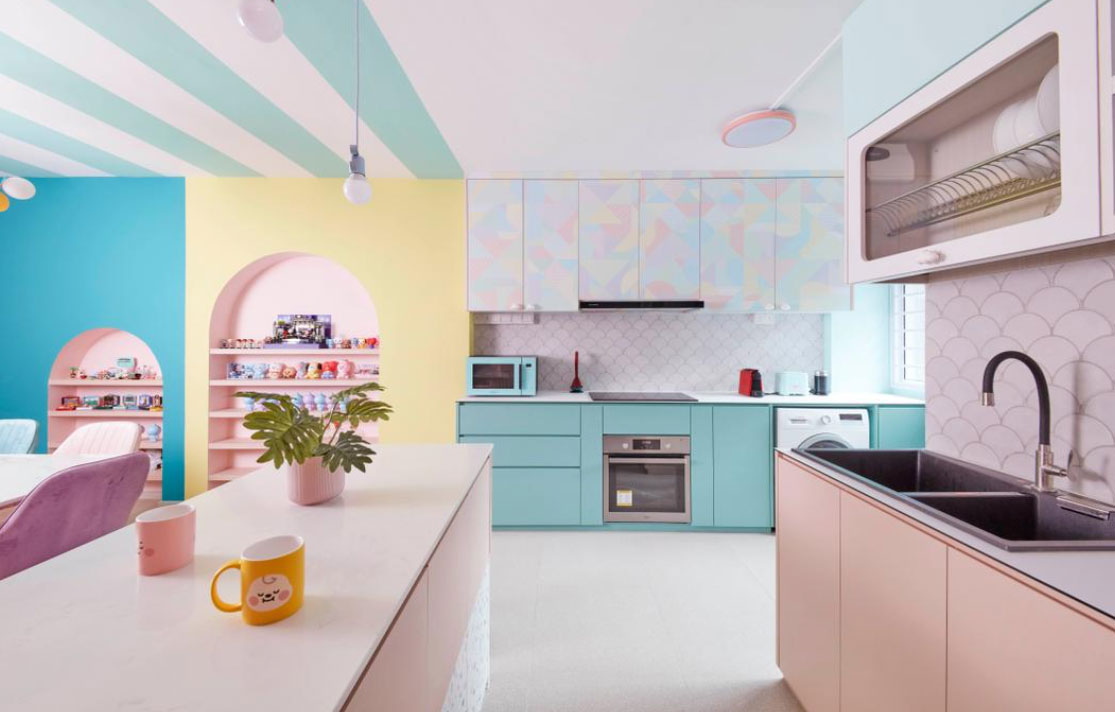 You can read the full interview with the homeowner here.

You can also watch a video by Tristeps Studios with the interior designer here.

All media via Qanvast