A family in Frankel Estate in the Siglap area in the east of Singapore has put up a public appeal and S$3,000 cash reward for the return of their brown domesticated short haired cat, Homer. Not community cat, but a pet

According to the cat's owner, Homer is not a community cat.

The rotund pet has been raised by the same family since he was a kitten in October 2013.

Suspected to have been abducted

Homer's owner said she believes her seven-year-old cat had been abducted and is appealing to the person or persons holding on to her pet to return him.

Homer's owner had already gone to the Chinese press with an appeal for information on her cat and she has also tried posting on social media pages to generate leads, but has drawn a blank so far. 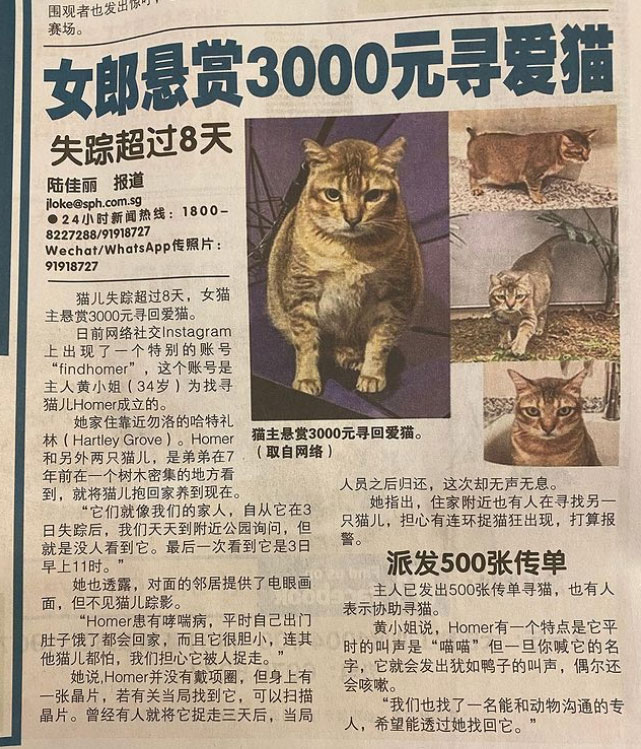 According to the owner, Homer is very timid, but exceptionally affectionate.

His docile and domesticated antics are evident in a series of videos put up on Instagram, under the handle @findhomer.sg, to acquaint the public with Homer, in the event he gets spotted. Homer's owner said her cat's disappearance for almost two weeks has been the longest he has ever been away from home.

In an email relaying information on her cat, Homer's owner, wrote: "He meows very much like a duck. He never wanders too far from home -- the furthest he has wandered off is three houses down.

She added: "He has never, in seven years, been gone for more than three to four hours on end."

"His daily routine would be to nap in our backyard till about 4pm, go to the street and return by 6pm."

"He is very much domesticated. He does not enter neighbours' houses at all. In our area there are stray cats, but they are at least a few hundred metres away, and I am 100 per cent certain Homer never goes there."

"In fact, whenever I stand at my door and shout for him, he will always return, proving he is always nearby."

Anyone with information or would want to return the cat can contact 98304744.