The Ministry of Health (MOH) has confirmed five new cases of Covid-19 in Singapore on Monday (Dec. 28).

Four cases are imported, and have already been placed on Stay-Home Notice (SHN) upon arrival in Singapore.

There is one new case of locally-transmitted Covid-19 infection found in the community.

Amongst the new cases today, two are asymptomatic, and three are symptomatic. The remaining case (Case 58767) is a Dependant’s Pass holder who arrived from India.

They had all already been placed on SHN upon arrival in Singapore and were tested while serving SHN.

Case 58766 is a Singaporean who works as a cabin crew with Singapore Airlines, and a part-time private hire car driver with Grab.

He is asymptomatic, and was detected through proactive testing arranged by the Civil Aviation Authority of Singapore of air crew

who had returned from overseas flights.

He recently travelled to the US for work from December 13 to 16 on a controlled itinerary.

He was tested on December 23, but his test result came back inconclusive on December 25, necessitating another test.

A second test conducted on December 25 was also inconclusive. He had remained at home while awaiting further tests. His swab on December 27 came back positive for Covid-19 infection and he was conveyed in an ambulance to the National Centre for Infectious Diseases on the same day.

His serological test result is negative, which indicates a likely current infection.

The cabin crew on the same US flight as Case 58766 have all tested negative for Covid-19 infection on December 23.

Given the relatively long time interval between his travel and positive Covid-19 test, MOH has classified this case as locally transmitted while epidemiological investigations are in progress.

In the meantime, all the identified close contacts of the case, including his family members and co-workers, have been isolated and placed on quarantine, and will be tested at the start and end of their quarantine period so that we can detect asymptomatic cases.

Serological tests will also be conducted for the close contacts to determine if the case could have been infected by them.

16 more cases of Covid-19 infection have been discharged from hospitals or community isolation facilities.

In all, 58,386 have fully recovered from the infection and have been discharged from hospitals or community care facilities.

There are currently 35 confirmed cases who are still in the hospital. Of these, most are stable or improving, and none are in the intensive care unit. 79 are isolated and cared for at community facilities.

MOH regular updates a list of public places visited by confirmed Covid-19 cases for more than 30 minutes when they were infectious.

No new locations were added to the list on Dec. 28.

Here's the complete list of locations visited by cases in the community during their infectious period: 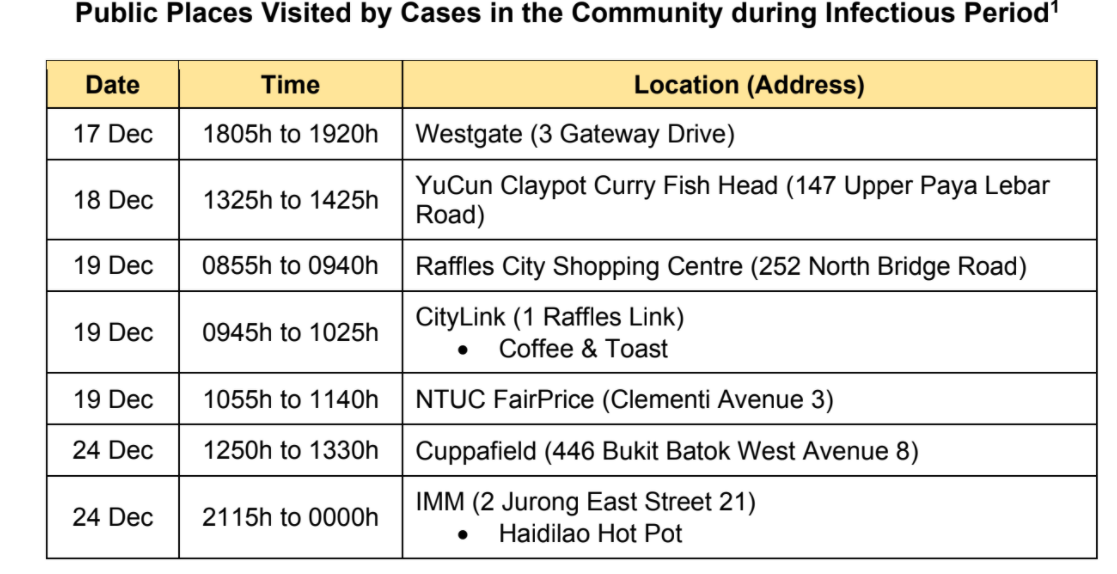