At 24 years old, Elmi Nurfianty Ramlan thought her life was going according to plan.

She was engaged to her partner, had a job that she loved in the customer service line, and was generally a fun-loving and bubbly person.

But a visit to the doctor changed the course of her life.

Elmi told Mothership that her vision suddenly went blurry in 2014.

Thinking she needed spectacles for her deteriorating eyesight, she went to an optometrist.

Instead, she was referred to a doctor, as the condition wasn't as straightforward.

To Elmi's surprise, the doctor told her that she had some scarring in her cornea and required a cornea transplant.

But that wasn't the only devastating news she received that day.

Following a full health screening, they found that her kidneys were slanted and diagnosed with Stage 3 chronic kidney disease (CKD).

At Stage 3, kidney function is moderately reduced. However, with proper treatment, it can prevent the condition from worsening.

The diagnosis shocked Elmi and her entire family as she was mostly in the pink of health.

She thought that the condition was possibly triggered when she had a high-impact fall while at work in 2010, which left her with a fractured leg and neck.

While the doctor recommended Elmi to go for a follow-up appointment and to start treatment immediately, she had no choice but to refuse treatment due to financial constraints, as she didn't want to pass on the burden to her family.

"The doctor told me that my kidneys were leaking and I was already at Stage 3 of kidney failure. They wanted to do a biopsy but I was afraid and told them no.

I told the doctor I wanted to try home remedy first. I don't come from a well-to-do family so it's difficult for me to do the treatment and each appointment can cost up to S$200."

Life went on as normal for the next two years until Elmi fell seriously ill and was hospitalised.

Two years without proper treatment caused her CKD to advance to Stage 5, which is also known as End Stage Renal Disease (ESRD) or kidney failure.

As Elmi's kidney couldn't function at all, she had to start going for dialysis sessions.

She started off with peritoneal dialysis (a more flexible kidney disease treatment that can be carried out at home, at work or on trips) from 2016 until 2018, when she contracted peritonitis, which is an inflammation of her inner abdominal wall, rendering her unsuitable for this type of dialysis.

Now, Elmi goes through haemodialysis, a type of treatment where the blood is continuously pumped through the dialyser to remove waste products and excess water.

In order to undergo haemodialysis, Elmi had to have an arteriovenous fistula implanted in her arm so that it's easier to insert the needles required for the treatment.

She is required to go to the dialysis centre three times a week, up to four hours each session.

To those who can't imagine what it's like to go through dialysis, Elmi simply described it as a pain she can't get used to.

"It's just painful. Even after two years, inserting the needle is still painful for me. I am not able to urinate anymore, so water retains in my body. I feel very weak and puffy, I am always hospitalised. It's just very tiring lah."

While she's thankful to be alive today because of the treatment, Elmi says that it has also affected her self-esteem.

"I didn't use to be this fat... This is all water retention. I was a healthy woman."

It has also made her treasure the little things like travelling to Johor Bahru.

I can't even go for staycations because of my dialysis session and, you know, money lah. Money is a big deal for us as it will mainly go towards paying for the house, food and my dialysis. We don't have extra income to splurge."

What hit her the hardest was that the condition has caused Elmi her career.

"My boss sat down with me and said that it's not working and told me to take some time to recover first. Everyone was looking at me differently as well.

When they said that, I took the hint and left my job. Suddenly, all my customer service experience has gone to waste."

At just 28 years old, Elmi had a long-term illness and was unemployed.

She said: "I was demoralised and heartbroken. It made me feel different from everybody else. I'm only 30 now and yet, I still had a long way to go."

Not only did it impact her self-worth, but she also began to worry about paying for her costly treatments.

S$400 a month spent on treatment

Elmi tells us that a month of dialysis treatment typically costs S$1,800.

After subsidies from the National Kidney Foundation (NKF), the treatment has been greatly reduced to about S$400 per month.

This, however, does not include the medication and appointments that she has to go for at least three times a year, which can go up to S$700 per visit.

While the NKF has helped to match her with various employers, most of them, sadly, never got back to her past the first interview.

Heaving a pensive sigh, she said: "Whenever they call me down for an interview, I will tell them that I am a dialysis patient and will have to go for dialysis three times a week. After that, I don't hear from them anymore."

She accepted a job working in a bakery where she got the opportunity to pursue her hidden passion in, well, baking.

"I did have an interest in baking, but I didn't have the foundation so this was actually perfect for me."

Unfortunately, her baking career was short-lived (or so she thought, back then).

A lot of her time was spent carrying heavy equipment and ingredients around the factory.

All the heavy lifting affected her fistula, which caused her to be hospitalised yet again.

"My husband thought that enough was enough, he told me not to look for a job anymore and to prioritise my health because I keep on being rejected everywhere I go, anyway."

In sickness and in health

On that note, Elmi elaborated quite a number of times how her husband is her biggest pillar of strength.

"We almost didn't get married," she casually told me.

"We got to know that I had CKD when we were still engaged. After my diagnosis, my parents did talk to him to, you know, ask him if he still wanted to proceed with this marriage. They don't want me to be a burden to him in the future."

On top of that, the doctor also told her that she may not be able to conceive because of the CKD.

Yet, despite such circumstances, her then-fiancé vowed to stand by her side for better or for worse.

With tears in her eyes as she thought of her husband's sacrifices, she said:

"He's always been supportive. Whenever I feel down and feel like I don't matter, he's always there to make me feel like I matter.

He's always there for me whenever I'm in the hospital. He's the only one working, he can't afford to take leave. It makes me feel sad because he's only human and falls ill too but he tries not to take leave because if he doesn't go to work, he gets a pay cut.

Without him, I'd probably be so lost right now."

Now happily married for close to five years, the doting husband will always find the time to keep all the financial and health worries off her mind by bringing her to the beach where they would have their own mini barbeque sessions and just relish in each other's company.

It is no wonder that her husband is also partly the reason why she started AbbyBakes, a home-based business that she founded during the circuit breaker period.

As she couldn't go out aside for her dialysis sessions, Elmi and her sisters decided to learn how to bake together via Zoom sessions.

They started off with a variety of cookies and, of course, her husband's favourite coconut blossoms, a steamed dessert with palm sugar and grated coconut filling.

What started off as meaningful baking sessions with her sisters turned into a budding dessert business.

"I needed some extra money because there were some dialysis sessions that I couldn't pay for, and then there were appointments and monthly medications that were expensive as well."

Here's a look at some of her offerings, including the blossoms:

AbbyBakes picked up when she was featured by influencers Luqman Abu Bakar and Diah Mastura, who also shared her story.

Following their posts, Elmi received a surge in orders and followers on her Instagram page.

"I jumped! Suddenly a lot of people were following me and messaging me to order my blossoms. When Luqman shared my story, I cried because I felt so touched. Now, more people understand what dialysis patients have to go through."

In a week, she would take in up to 12 orders and would occasionally have to buy the ingredients right after her dialysis, for last-minute orders.

Despite experiencing lethargy after her dialysis sessions, receiving orders from her customers gives her the strength and motivation to go on.

Seven months into her business, she has also expanded her menu to add a variety of tarts into her menu.

Her top sellers are fruit tarts and Kinder Bueno tarts.

Some of my personal favourites, however, are her peppermint chocolate tarts and the candy cane chocolate tarts, which are part of the shop's festive offerings. 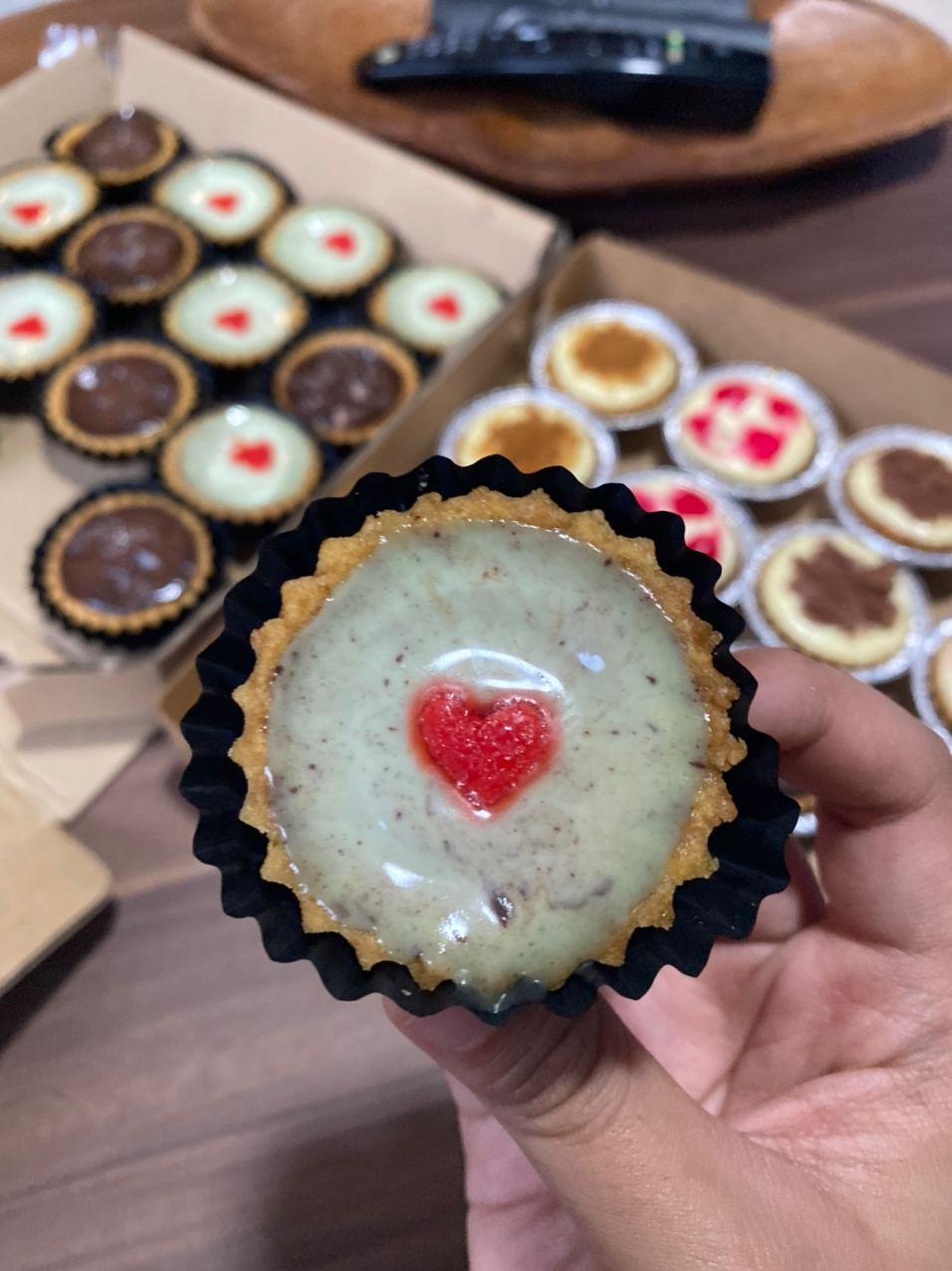 At such low prices, Elmi has a very thin profit margin.

However, she's hoping to keep the costs low for now as she wants her customers to enjoy her bakes without breaking the bank.

Dreams to open her own shop

While life has thrown multiple curveballs at her, her small business has driven her to have a newfound purpose in life, and quite a noble one at that.

"To be honest, I really want to open my shop. It would be a nice dream to have my own station to bake and for customers to do walk-in purchases.

I'd ask my parents to join as well, especially since my father is out of job due to Covid-19. My family has been supporting me since I fell sick, so if given the chance, I want to help them too."