Fazley Elahi Rubel is, by many counts, well-integrated in Singapore.

The 30-year-old, who has been working in Singapore for 11 years, has founded two different initiatives for his fellow migrant workers, was featured numerous times in local media, and was even invited to speak at the TEDx event at Nanyang Technological University (NTU) in October of this year. 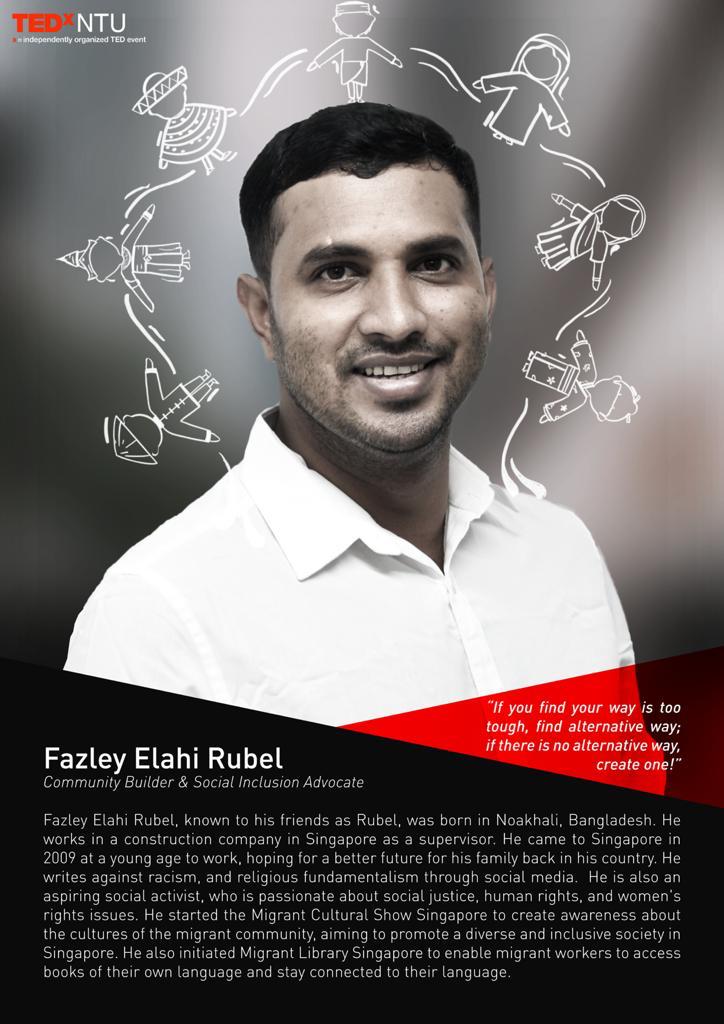 However, it has not always been this way for Rubel, who was only 19 when he came to Singapore from Bangladesh to work and help support his family — his five siblings and his parents.

Rubel, a safety coordinator at a construction company, recounts how, for the first seven years he was in the country, he never had the opportunity to get to know Singaporeans, over WhatsApp video call with me.

And although, since then, he has managed to find a community amongst both Singaporeans and migrant workers, there is still much work to be done when it comes to migrant workers' integration in Singapore.

"This is the way presented to us. We think Singaporeans are superior and we are workers, they might not like us. So the fear, it is a barrier."

This can be very difficult for migrant workers, and also leads to divisions within society:

"I think it is not a good idea to have society within society. We are separated from our country and our families for many years. If we are not part of the community and society here, it will be tough for us to live without any connection and friendship."

There's also the issue of physical separation; many migrant workers are housed in dormitories far from the centre of town, and are told to stay away from areas where Singaporeans live.

"Question yourself," Rubel says to me. "There are so many migrant workers in Singapore. Why don't you see them as your neighbours? Where are they?"

He explains that some employers tell their workers not to go into residential areas and not to cause any "disturbance" to residents.

"Nobody knows what can be considered a disturbance, so in order to prevent this, we just stop going there, we stop going to the residential area.

So, we disappear, right?"

And while many Singaporeans may be sympathetic to migrant workers, there are others who do not understand these workers' cultural practices and have, on occasion, even propagated unfair rhetoric about them.

One place that Rubel has seen this come through is in social media comments blaming the outbreak of Covid-19 among migrant workers earlier this year on the perception that they are unhygienic.

"But you put 20 people in a single room, how can there be some prevention from Covid? It's not possible."

After seven years of not having any local friends due to a lack of channels for meeting and communicating with Singaporeans, Rubel met Singaporean Alex Lew, who Rubel describes as his "best buddy".

The two met in 2017, at a barbecue party and discussion hosted by the Humanist Society Singapore — a group for "humanists, freethinkers, atheists, agnostics and other like-minded people" — where Rubel and another friend were the only migrant workers present.

Rubel and Lew became instant friends, and have stayed in close contact in the three years since then.

And as the years have gone on, their friendship has grown only stronger:

"Our friendship grows better and faster as we share anything about [ourselves] and our famil[ies] to each other, we share each other’s culture and food with each other."

Each week (prior to the pandemic), they would meet up to walk around town. Lew would bring Rubel to his choice of restaurants for Chinese food restaurant, while Rubel would bring Lew to Bangladeshi restaurants.

"It's kind of... it's not fake. It's authentic feeling of relationship," Rubel explains.

Organised initiatives for the migrant community

In 2017, Rubel — an avid lover of reading and poetry — decided he wanted to give back to the migrant community, so he started the Migrant Library Singapore with a few friends.

Rubel and his friends wanted to give migrant workers access to books in their own language. At the moment, the library offers books in Bengali, Bahasa Indonesia, Malay, Tagalog, Tamil, Thai, and Chinese.

The library is based at Transient Workers Count Too's (TWC2) DaySpace at Farrer Park where workers can loan books for free for 30 days at a time, and there have also been a number of iterations of a mobile library set-up at dormitories.

The same year, Rubel led a group of migrant workers who organised the Migrant Cultural Show, in order to raise awareness about the various cultures within the migrant community.

"I want to promote cultural bonding and friendship between different nationalities through this event. This is a great opportunity to increase understanding between cultures and combat stereotypes," he told The Straits Times, about the inaugural show.

Around 400 guests attended the four-hour show, which featured more than 90 migrant workers from a variety of countries performing music, dance, poetry, and drama.

Rubel hopes not only to connect the migrant community and give them a chance to showcase their talents and culture, but also to create a bridge between migrant workers and Singaporeans.

"And also to show Singaporeans that we are not just workers," he tells me.

"We have talent, we have passions and cultural expression, and willingness to engage. We also can contribute to other social and cultural aspects of this society."

Getting connected to different organisations and people

Through his work with the Migrant Cultural Show and the Migrant Library Singapore, Rubel also became acquainted with a number of local organisations and individuals.

One of them was then-Nominated Member of Parliament Anthea Ong, who reached out to him after reading an article about the Migrant Cultural Show.

Ong connected Rubel with Welcome In My Backyard (WIMBY), a volunteer-run initiative started in April this year, in response to NIMBY (Not In My Backyard) sentiments that were circulating online in response to migrant workers being temporarily housed in residential neighbourhoods so that they could continue to work while the health authorities fought to control the outbreak in the dormitories.

Nicholas Oh, one of the co-founders of WIMBY, explains that the comments that they saw on social media harkened back to the Serangoon Gardens conflict in 2008, when residents strongly objected to plans for a dormitory to be converted from an old school in the neighbourhood.

The goal of WIMBY, then, is to show migrant workers that they are welcome in these neighbourhoods.

"I thought it is a good initiative to welcome us as the neighbours," says Rubel, and so he and the Migrant Cultural Show team decided to partner with WIMBY to hold the third edition of the show, which was performed live in various locations via livestream on Jun. 21 this year.

Through working together to organise this year's Migrant Cultural Show, Oh and Rubel have become fast friends.

Their main two areas of overlap: appreciation for good alcohol, and dedication toward migrant workers' issues.

"I think we're both very chill people. He's honest and forthcoming with me. And there's just that mutual trust," Oh tells me.

He describes Rubel as a "superhuman being", who devotes his time toward supporting others:

"He has so much passion for pushing for the welfare of those less fortunate than he is. He has amazing perspective, is wiry and humorous, and walks to the beat of his own drum."

Rubel, likewise, commends Oh for his friendliness and for his hard work in supporting migrant workers in Singapore.

While they haven't had much of an opportunity to meet up in person yet, due to Covid-19 movement restrictions for migrant workers, the two tell me that they tell me that they definitely plan to hang out when they can.

WIMBY, which now has about 30 to 40 volunteers, has two main goals: integration of migrant workers in the communities where they live, and broader advocacy for issues pertaining to migrant workers' lives.

On Oct. 30, WIMBY had their pilot in-person event, which brought migrant workers and local Bukit Batok residents together for an afternoon of activities at Bukit Batok Nature Park, with the support of government agencies including the Ministry of Manpower.

One thing that the WIMBY team actively tries to do, Oh explains, is to involve people who may not be particularly interested in migrant workers issues, so that it is not just an echo chamber.

One of their upcoming programmes aims to give community members a chance to pay-it-forward to migrant workers living in their neighbourhoods.

Called Backyard Makan, the initiative encourages local residents to patronise three participating bakeries — Bakery Brera, A Wildflower Bakery, and The Headless Baker — to sponsor baked goods which will then be delivered to migrant workers living in the Queensway and Ghim Moh neighbourhoods.

The programme also encourages customers to sign festive cards — physical copies or online ones — for the workers, and is organised in conjunction with SG Cares Giving Week from December 1 to 7.

The sponsored baked goods and cards will then be delivered by WIMBY volunteers to migrant workers during the Christmas period.

"So the dream is that we continue working towards this, and we give confidence to [government] agencies, migrant workers, and employers to realise that actually this arrangement is feasible going forward."

And the phenomena of migrant workers living in our neighbourhoods is not a new one, Oh points out. In fact, there are many migrant workers who fit the Ministry of Manpower's criteria who are allowed to and have been being housed in HDB flats rather than in dormitories.

"Participation doesn't necessarily have to just mean that Singaporeans try our best to involve migrant workers in our activities, and stuff like that. But instead, actually co-creating and co-organising an event together."

The shift toward achieving better integration can start with small steps, both Rubel and Oh explain.

People who are interested in working on this goal can, of course, get in touch with the WIMBY team through their website or social media channels, Oh says.

But, he adds, the more important — and probably more underrated and difficult — thing to do is to talk to your family and friends, and to gently challenge stereotypes they may hold about migrant workers.

For Rubel, the steps he suggests are simple:

"When you see migrant workers, don't look down. Approach them, maybe wave at them. They'll appreciate it. Greet them and talk to them.

It will change their perspective of Singaporeans. When we see you, we fear. But when you approach us, smile, and wave, we feel different."

The change may be slow, but Rubel says that he has found that having that first interaction can change many Singaporeans' understanding of migrant workers:

"Most of the Singaporeans don't really interact with migrant workers. But once they interact for one or two days, then they say, 'Oh, they're the same [as] us!'

Before the interaction, we were aliens. Once we know each other, they will feel us.

And, of course, we are good people, so we can have friendship between Singaporeans and migrant workers."

Top photos courtesy of Fazley Elahi Rubel and Facebook / Welcome In My Backyard.