A 3-minute video put up on Facebook on Nov. 21 showed the parking enforcement officer, also known as a warden, being confronted by at least two different delivery personnel over his strict enforcement method.

Another video, lasting slightly more than 2 minutes, showed the same warden putting on a civilian attire over this uniform, smoking, and subsequently, littering in the same estate.The warden appeared to have been unaware his actions were being secretly filmed.

The caption of the Facebook post with the two videos read: "POWER & FAMOUS PARKING OFFICER. ENFORCING THE LAW. BREAKING THE LAW."

What video of confrontation showed

In the 3-minute video of the confrontation between the warden and delivery personnel, the dispute appeared to have been over the proper use of the loading and unloading bay in the Admiralty Grove HDB estate.

The warden, a middle-aged man, was seen telling delivery personnel they are not allowed to stop in the loading and unloading bay beside the void deck when carrying out delivery duties.

The warden said: "This is loading and unloading bay, no delivery."

The warden, pointing away from the camera, told the delivery personnel to park in the multi-storey car park instead: "Car park there."

The delivery personnel filming could be heard asking: "So what's the point for you to put that gantry? That gantry is for what? Free incoming is it?

Throughout the 3-minute video, the warden was seen not wearing his mask properly as it was not covering his nose.

The two people off-camera appeared to have been a delivery personnel and another person who at that time had been trying to understand what the commotion was about.

About 1 minute into the video of the confrontation, a McDonald's delivery rider showed up and reasoned with the warden for the remainder of the video. 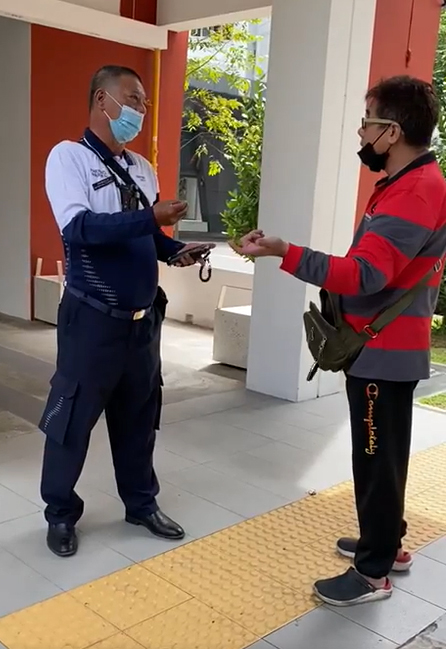 The delivery personnel filming then chimed in and said the warden took down his vehicle number.

The warden replied that the loading and unloading bay is allowed to be used for only 15 minutes.

The McDonald's rider in the video tried to reason with the warden by explaining why his enforcement actions was making life difficult for delivery personnel.

This was what the McDonald's delivery rider said:

McDonald's rider: Uncle, McDonald's delivery is only for 3 minutes, is that not allowed? I don't understand.

If you don't allow, I will park in the loading bay.

It's only 3 minutes and I don't understand why, Uncle.

We are delivery. We not park down there play play, Uncle.

3 minutes I told you already, you also cannot.

He come here he want to take my number. Alamak why like this ah?

Parking enforcement warden: 3 minutes is okay, I didn't say it is not okay.

McDonald's rider: When I parked my vehicle you came over and took down my licence plate number. Isn't that very funny?

You told me to turn, I respect you, I turn and park at the loading bay.

And you come over and take down my licence plate number.

Parking enforcement warden: There are many complaints here.

McDonald's rider: Many complaints? But I am doing delivery. Don't like that Uncle.

I make a living doing delivery. When I stop my vehicle here you come over and take down my licence plate number?

Camera man: They say they only take your number but in the end kenna summon. This is not the first time like that. Few times already they take the number they still summon you.

Parking enforcement warden: Loading bay is not allowed for delivery. You have to go to the car park. And I didn't tell you that you can't do delivery. I gave you 5 minutes.

McDonald's rider: Then why did you take down my number?

Parking enforcement warden: The computer system registers 5 minutes and the time is up.

McDonald's rider to camera man: He said can, I can park, but he take my car plate number.

I thought you must give me 5 minutes grace period then take my car plate number.

If not I also funny leh (befuddled).

Don't mind we all all write in. Make him famous.

In what appeared to be retaliatory action, the warden was then covertly filmed smoking and littering.

The warden was seen in a civilian shirt over his uniform.

Once he was done smoking, he removed the shirt and kept it in his sling bag and walked away.

In response to queries from Mothership, Certis said the warden has been suspended from all duties.

Certis said in a statement:

We are disappointed to learn of an incident that occurred on Nov. 21, 2020. Our enforcement officer was filmed smoking and improperly disposing the cigarette butt at Woodlands Avenue 6. After our internal investigation, we spoke to the officer and issued him with a letter of warning. He has also been suspended from all duties. The incident has been reported to relevant authorities for further action.

Certis expects the highest discipline standards from our officers, and they are required to fully comply with these standards and observe the law at all times.