Five drug offenders comprising three men and two women aged between 29 and 55 were arrested by CNB officers during a raid on November 11.

The Bureau seized a total of about:

CNB estimates that the drugs are worth close to S$2 million. According to CNA, this is the largest haul of heroin in 19 years.

Here's the sequence of events that occurred during the November 11 raid that took place in multiple locations.

In the afternoon, CNB officers intercepted a vehicle in the vicinity of Siglap Road.

CNB did not provide a reason for intercepting said vehicle, but three bundles were recovered. They contained 1,453g of heroin.

Officers then brought C to her "hideout" unit in the vicinity of Siglap Road where they recovered about 11g of heroin, 2g of ‘Ice’, one ‘Ecstasy’ tablet, and one Erimin-5 tablet.

It's a lot of information to digest, so here's a handy table provided by CNB:

A separate party of CNB officers were observing a residential block in the vicinity of Bedok Reservoir Road on the same day.

They arrested a 35-year-old Singaporean male (D) and recovered six bundles were recovered from him. They contained:

Officers then raided D's hideout in that residential block where they arrested a 29-year-old female Singaporean PR (E). From the unit, the officers recovered:

Here's another table for the drugs recovered from Bedok Reservoir Road: 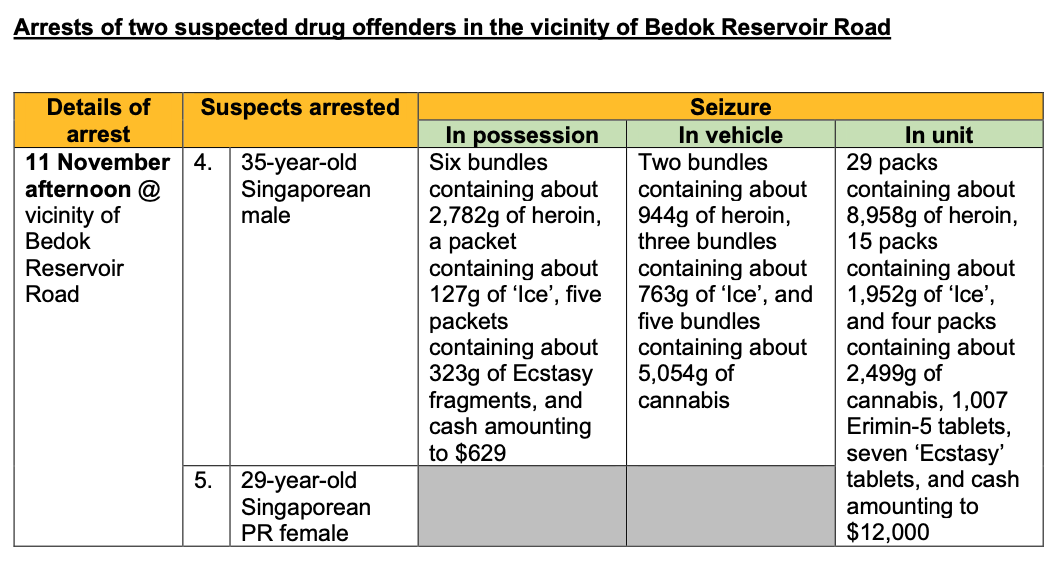