There is a good chance that many Singaporeans know someone who is slightly older, speaks Teochew, is Catholic and lives in or was from Hougang.

Far from being a sheer coincidence, the odds that someone is or was from Hougang already makes it likely that the person is also Teochew and Catholic.

The fascinating history behind why that is so was previously written about as an academic topic in 2018, "The Teochew-Catholic Rhythm".

Church of the Nativity in Hougang built for Teochews

The Church of the Nativity of the Blessed Virgin Mary in Hougang is one of the most recognisable landmarks in the northeast region of Singapore. 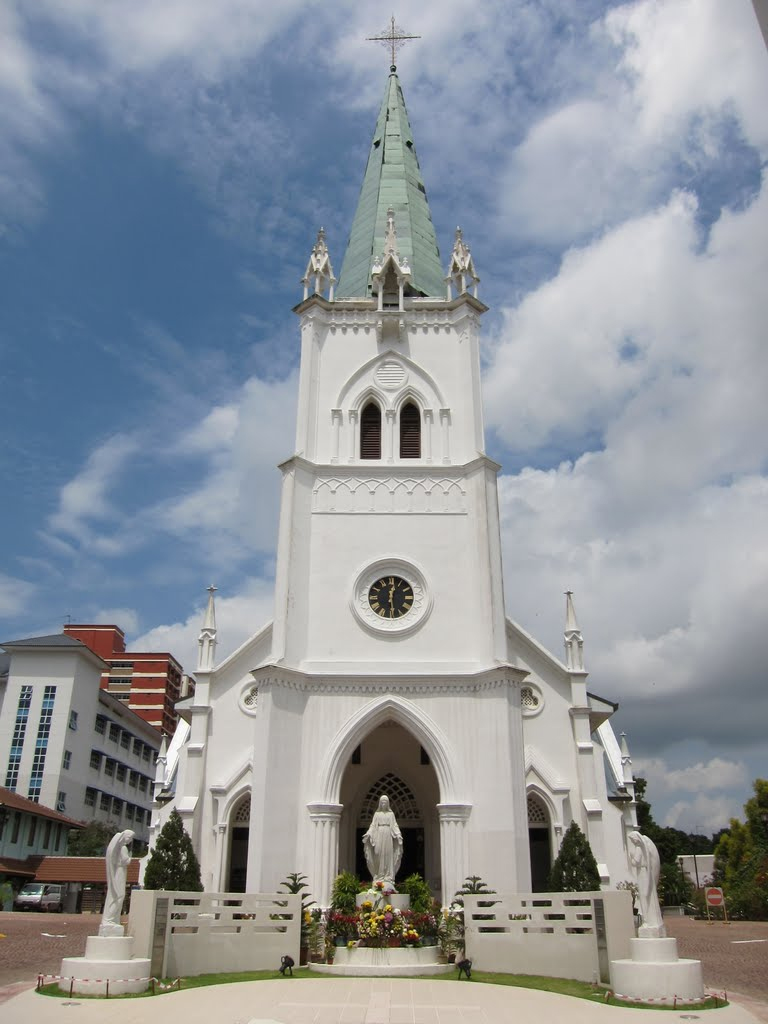 The iconic Catholic church has been around since it was built in 1901.

But its history began some five decades earlier in the 1850s before that, with Chinese immigrants coming to Singapore.

Teochew immigrants from China made up Hougang's population

Teochew migrants arrived in Hougang from Shantou, China from as early as the 1800s.

The Teochews were the second-largest dialect group after the Hokkiens to come to Singapore from southern China at that time.

Interestingly, the Teochews who arrived in Singapore from China were already Catholic converts.

Teochews in Shantou were converted to Catholicism as early as the 18th century by missionaries.

The Catholics who began to arrive in Hougang had their origins in that population who were already converted.

When Father Ambrose Maistre arrived in Hougang in 1852, he was linking up with Catholic converts and setting up a base here.

The Teochews in Singapore proved to be open to evangelical outreach.

Why this was so is subjected to speculation, but it has been explained that it was the Teochew people's sociability and being good conversationalists that led to their natural affinity with the proselytising Catholics.

In 1857, Father Maistre procured 40 acres of land from the British East India Company to build an attap church.

At that time, there were about 700 Chinese in Hougang.

Once the church was established, contacts were made between the bishop in Shantou and the missionaries in Singapore.

This resulted in a steady influx of more Catholic and non-Catholic Shantou migrants to Hougang, who ended up working as farmers and fishermen in the area.

Hougang in the early days was a jungle where wild animals roamed.

The Neo-Gothic church design that is seen today was unveiled in 1901 to accommodate more people -- about 650 parishioners at that time.

As the church expanded, its congregants grew with some 500 extended Teochew Catholic families living on church land in close proximity to one another.

This was a lot in rural Singapore then in the early 1900s.

Needless to say, Catholicism and Teochew culture then blended and grew with the population of the community in Hougang over time, a growth that was to last till the 1980s at least.

An example of how concentrated Teochew Catholics were in Hougang subsequently can be found in the records.

Some 70 per cent of Hougang residents were Teochew Catholics, according to figures calculated from 1973 parish census.

After the end of World War II in 1945 till the mid-1960s, the Catholic church played a significant role in reaching out to the Hougang community.

The Japanese Occupation from 1942 till 1945 displaced the majority of the Teochew community.

Many Teochew males were killed and others fled to Negeri Sembilan, Malaya.

A considerably different community of Teochews to the pre-war group remained in Hougang after the Japanese surrender in 1945.

In response to the horrors and depravity of war, the Nativity Church intensified its outreach in 1945 after the occupation to reach out to the community.

The church met the pragmatic concerns of the community and made inroads into the lives of the people.

This impact made by reaching out to Hougang residents was evident in the increase in the number of baptisms the parish recorded post-war compared to pre-war.

The first outreach effort of the Nativity Church took the form of liturgies for mourning the dead post-Japanese Occupation.

Teochew families would register the names of the dead in a small chapel at Punggol End where the Sook Ching killings occurred.

Father Francis Chan, appointed in 1945, would lead a procession to the chapel celebrate a Mass for the souls.

The church also restarted the Saint Joseph's Dying Aid Association to help families in their time of bereavement.

Reaching out to Teochew Catholics using what works

The church also reached out to the parishioners at the experiential level, as many of them had low education levels and celebrating Latin Masses put up language barriers that could not cultivate intellectual understanding of the faith.

However, the Catholic priests who came to impart their ways were also moulded by the community.

Most of the foreign priests posted to Hougang had some linguistic proficiency in Teochew.

For instance, Father Edouard Becharas was a French priest fluent in Teochew whom parishioners would remember for his translation of the Stations of the Cross into Teochew.

Teochew customs and Catholic rituals influenced each other

The Catholic Teochews of Hougang identified with one another through common routinised practices.

The Teochew cultural practices, such as giving of sidiamgim, a gift of four different items of gold from the groom during wedding, were also assimilated with Catholic beliefs upheld by the church.

The process was always two-way.

The church tolerated Teochew rites as cultural and acceptable, as they could exist alongside Catholic beliefs, and did not import pagan practices.

The openness extended to the priests who wanted to be part of the people.

But "angmoh seng hu" subsequently became a term of endearment as it showed that non-native speakers of Teochew had made the effort to learn the dialect and assimilate with the rest of the Teochew community.

4 schools in the area the result of Nativity Church

The Nativity Church also monopolised education in Hougang by providing four schools, and with them, single-sex education in both English and Chinese.

These four schools went through various stages of transformation and modernisation but are identified today as:

- CHIJ Our Lady of the Nativity

In the 1950s, the Brothers of St Gabriel took over the English-medium boys school and renamed it Montfort School, whereas the Franciscan Missionaries of Mary nuns ran the Chinese-medium girls school as Hai Xing Girls School.

The nuns of the Convent of the Holy Infant Jesus (CHIJ) converted the English-medium girls school to Punggol Convent.

Holy Innocents' High School got its initial name in 1958 after secondary classes were started.

Catholics were given priority to these schools, which aided conversions to the faith.

Non-Catholic students entered these Catholic schools and were exposed to the routinised practices, such as First Friday Masses, and later on, became Catholics too.

Besides the church and schools, Catholic families in Hougang were a major driving force of the religion.

Anecdotal evidence suggested that the chanting of the Teochew rosary after night fall and dinner occurred religiously, undertaken by the masses in large groups.

The Sultan of Johor donated the Statue of the Immaculate Conception to the church in 1946.

There were stories among the Teochew community about how the statue had protected the church from bombing by the Japanese, but this was clearly a fabrication as the statue was not in place yet when WWII broke out.

Nonetheless, such anecdotes and word-of-mouth narratives were passed on to the younger generation, in line with the oral tradition of Teochews.

From the 1960s till the late 1970s, the identity of Teochew Catholics in Hougang solidified, even as strains extending from the modernising state weakened bonds in the community.

To encourage parishioners to get involved in the church, active participation in church via activities was encouraged.

The church even replaced Latin Mass with English and Mandarin masses in 1965 and 1970 to make them more accessible.

In 1971, Father Matthias Tung took over Father Berthold and initiated the Teochew Mass and a Teochew choir.

The use of Teochew dialect proved popular with the parishioners.

Father Tung then went on to maintain a 30-year pastoral leadership that was popular with the Teochews.

From 1977 onwards, the identity of Teochew Catholics started to wane as the people of Hougang were displaced by urbanisation and they moved into public housing flats that took them away from Hougang.

The geographical displacement of the Hougang community was more or less completed by 1981.

By that year, HDB flats had replaced kampungs in Hougang and the area's residents were relocated as far as Whampoa and Marine Parade, while others remained close to the church.

The resettlement policies led to the decline of church influence over schools and caused the fragmentation of extended families into nuclear families.

The schools on their own were also secularised over time, with technical skills emphasised.

From 1959, increasing emphasis on technical subjects saw less priority given to religious studies.

For example, CHIJ Punggol (which later became CHIJ Our Lady of the Nativity) taught religious education after school hours only for Catholics to attend.

The enclave of Teochew Catholics in Hougang has dwindled over time, but people with friends and family in Hougang can attest to the seemingly widespread number of Teochew-Catholics there.

The people of Hougang, known as Hougang-nang, will also attest to the unique Teochew Catholic identity as a result of the borrowing of practices between Teochews and Catholics.

This prevalence of Catholicism in Teochew Hougang would earn the area the title of "Siadi", meaning "Holy Land" in Teochew.

Due to the presence of the Catholic church, Hougang served as the centre of a community that stretched to Sungei Serangoon and Upper Serangoon Road.

The perception of the "holiness" of Hougang saw the founding of St Anne's Church in Sengkang in 1963 and the Church of the Immaculate Heart of Mary at Highland Road in 1953 as offshoots of Nativity Church.