Before this year, my go-to for a quick and cheap getaway would be to go somewhere in Malaysia by bus, maybe spend a night or two in an inexpensive hotel.

With that option out of the picture for the foreseeable future, a cruise (even one that would end up nowhere) had real appeal. What else was I going to do with my unused leave, anyway?

Which is why I was especially glad to be given a chance to take a trip on Dream Cruises' newest ship, the World Dream, courtesy of Genting Cruise Lines, which invited Mothership and other media outlets for the second of a series of cruises to nowhere that have been lined up over the next few months.

Ours was a three-night cruise which sailed from Marina Bay Cruise Centre on Sunday evening and returned on Wednesday morning.

"How was it?" many asked on our arrival back in Singapore.

Here's a 10-point summary for readers in a hurry:

Arriving at the Marina Bay Cruise Centre, we were quickly directed to the swabbing facility set up at level 3 of the building's carpark.

As there were no queues, it took less than 40 minutes to register for the test, get swabbed, and wait for results in a designated area.

If you're wondering about how the swab test went, it was a funny feeling, but not at all painful.

Before the test, we were given a piece of tissue to prepare for the almost-inevitable sneeze that comes because of your nerves getting tickled.

As this is the antigen rapid test, the swab doesn't go as deep as it would for the polymerase chain reaction (PCR) tests, and costs less too — S$60 for both tests.

Once we got the all-clear, we headed over to the main building, collected our card-keys and our mandatory MICE tracking tokens, passed through customs, and got on board.

The first thing that struck me about being on the ship, World Dream, was its massive size.

How could something this big be floating in the water? I wondered, as we were led down yet another one of the ship's long corridors which spanned its 335 metre length, across its 19(!) floors.

With size comes stability. To get a sense of how quickly the ship moves, you'd have to rely on other objects (like distant land, stars in the sky, or other ships), or look out from the decks at the movement of the water below.

We only felt the ship in motion once: a gentle throbbing from its engines, which started up in the evening on the first day, to depart from Singapore.

After that, we sailed peacefully through the relatively calm waters of the Malacca Straits.

As it turns out, on a cruise, it's ironically possible to forget that you are at sea.

Cruising to nowhere in Covid-19 times

Cruising to nowhere is not a new concept at all. Instead, it "has been a long tradition" said the ship's captain, Robert Bodin. 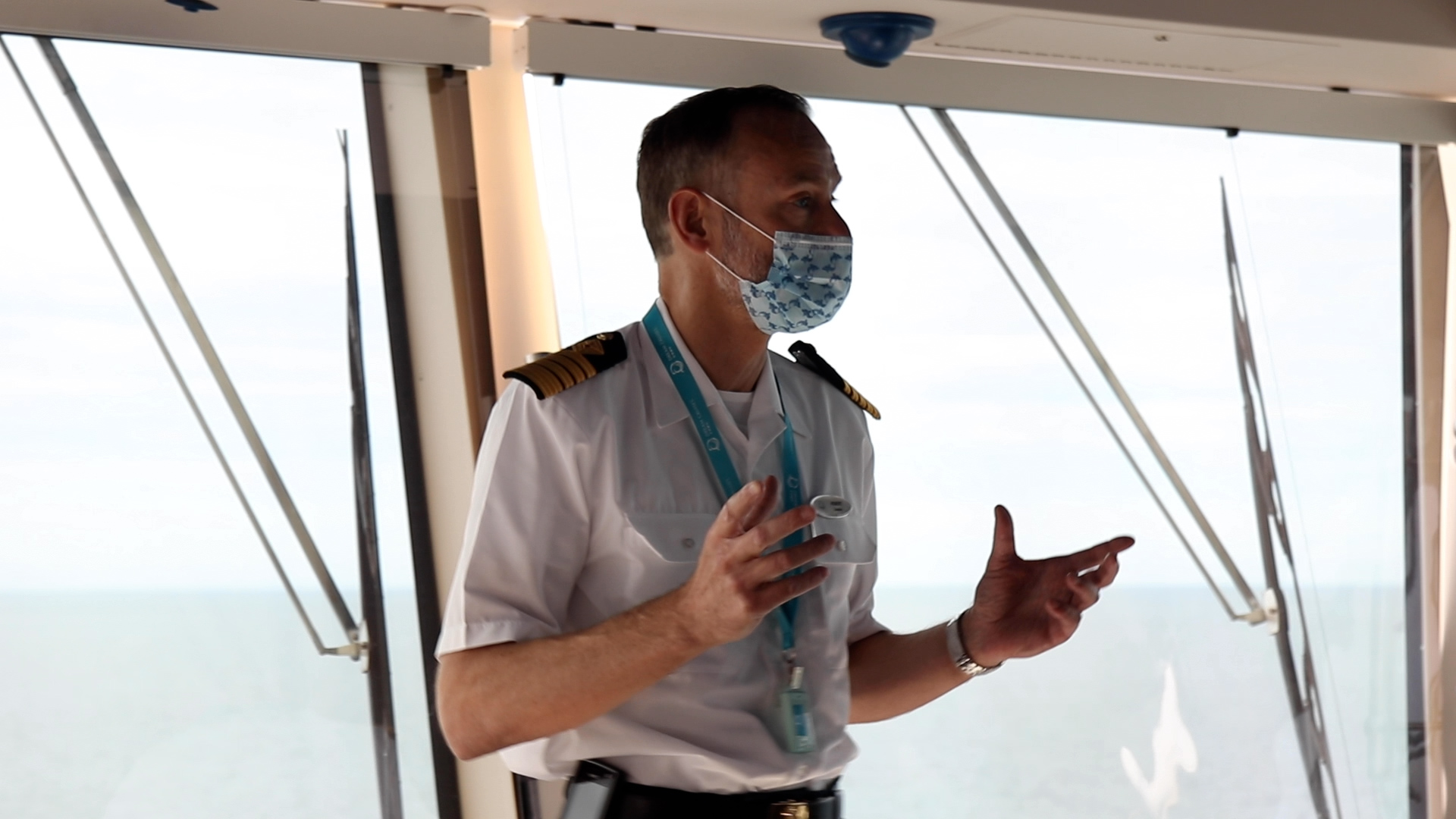 To him being able to resume that tradition is "a great relief" after months of inactivity.

After all, he says, "we're made to have people on board".

But the resumption of cruising activity, like everything this pandemic year, is different from what it was before, in several key ways.

This could be both good and bad, from a passenger's point of view.

This ship can take a maximum of 5,000 passengers at once (assuming all cabins are fully occupied), but is currently operating at a significantly reduced capacity of around 1,700 passengers (as only half the cabins can be used).

The pool deck felt especially spacious, with some furniture stacked up and tucked away, leaving just a few deck chairs and sofas for lounging, duly spaced 1 metre apart.

Elsewhere in the ship, queues for food moved briskly while seats in entertainment venues and restaurants were freely available, even without reservation.

One exception was the teppanyaki area, however, which was fully booked, owing to the reduced capacity at each station.

On that note, all safe management measures (SMMs) applicable on land are also applicable on cruises, we were told during a tour of the ship.

This means safe distancing markers wherever queues are expected to form, adjacent seats being marked as unavailable, and even plexiglass screens at some areas.

"If you know each other, you may stand together," he added, but how would this apply to new friends, casual acquaintances, or even potential friends?

Needless to say, safe distancing and reduced capacity does mean that it's slightly awkward and difficult to chat with fellow passengers and make new friends, which some might consider an important part of travelling.

John and Josephine Tay, retirees in their 70s, tell me that making friends with fellow passengers from different backgrounds used to be a big part of their cruises in the past. The couple would go on at least two cruises each year.

"I feel so sad," John said of the ship's reduced capacity, recalling how he was the only person watching a movie on one of the screens at the ship's lobby one day.

There's also the fact that there was no free seating in the ship's restaurants. Diners were allocated tables to ensure that they only sat at tables that had been sanitised after the previous group had left.

Still, my colleague Abriel and I had a short chat with the couple one day when we found each other seated at adjacent tables in the ship's seafood grill restaurant.

What apparently went on behind the scenes of the cruises to nowhere was an extensive approval process, where cruise lines had to show the authorities that they were able to ensure compliance with SMMs across all the different venues and activities on their cruise ships.

Perhaps the worst-hit venue on the ship was the Zouk Beach Club on the top deck.

Its wading pool, the site of foam parties on previous voyages, had been drained, and scant activity was seen except at a nearby bar where drinks were served till 10:30pm — though guests could of course continue to imbibe in their cabins, if they wished.

Other venues, such as World Dream's sprawling 1,000-seater Zodiac theatre was limited to a maximum capacity of 250, in line with the rules in effect on land.

And the best seats in the front few rows were cordoned off, to ensure that there would be enough distance between performers (who weren't wearing masks) and patrons (who were).

Meanwhile, in the Silk Road Chinese Restaurant, which was lavishly decorated in cabaret-style red and black, tables were arranged in a semi-circle around a stage where videos of old Mandopop performances played on a big screen.

The videos were screened in lieu of singing and dancing, since live performances at F&B outlets remains off limits, both on land and at sea.

And an entertainment lounge with a bar and space for live music was converted into an activity room where parents could bring their children for art workshops.

This may sound like a lot of restrictions to deal with, but it is one way to have multiple experiences without needing to plan way in advance and scramble for tickets to each and every event.

How does cruising to nowhere compare to a staycation?

A cruise to nowhere has much in common with a staycation; you pay for a fancy room where you'll sleep for a few nights, and get to use amenities like the pool and gym, while having easy access to nearby attractions such as restaurants and cafes.

But there are several key factors that might push you toward one or the other, depending on your preference.

1. Cruising is one-stop convenience, at the cost of flexibility

One of the benefits of being "stuck" on a cruise is that it makes decision-making quite straightforward. Feel like having sushi? Go to the sushi restaurant. Want a massage? Head to the spa.

Cruises are often touted as an all-in-one floating resort/hotel that has something for everyone. This turned out to be quite true in our experience, with a myriad of different activities and events on each day's calendar, catering to kids and adults alike.

Two of my fellow passengers, Jen Chan, 40, and Shan Lin, 36, explained why they opted for a cruise instead of a staycation.

"You must go and plan itinerary for staycation, mah," said Lin, who said that being on a cruise meant that one did not have to "waste time deciding what to do".

Chan pointed to the convenience of being able to do multiple activities in a short span of time. "We can shop, we can eat, we can spa," she said.

The downside of this convenience and seamlessness, however, is that one loses flexibility.

In order to provide "something for everyone" in the same cruise ship, there is often only one of each of those somethings.

For example, I was disappointed to hear that matcha lattes were unavailable at the ship's only cafe. Had this been a staycation, I could easily have gotten my fix, albeit after a quick google and perhaps some walking.

And while the steak was flavourful and well-complemented by a decent Caesar salad and seafood chowder, I would have dined elsewhere, had I known in advance that the meat would be overdone, and served with a runny, overly-sweet gravy reminiscent of a coffeeshop Western stall.

2. All "cruise compromises" can be explained by price

That said, at their current pricing, cruises to nowhere can really deliver value-for-money, when compared to similarly-priced staycations.

The price of the cruise tickets includes three buffet meals a day, at what Dream Cruises calls "inclusive restaurants".

On World Dream, there were three such restaurants, each one located at the front or rear of the ship, allowing us to dine with a splendid view.

The Lido, the largest of the three venues, almost felt like a cookhouse with its long catering lines and neat, largely-uniform seating, except that the food was actually enjoyable.

Not exactly restaurant quality, it tasted like what you might get from a catering company if you had a higher-than-average budget for your event. In short, good, but not great, and definitely value-for-money.

A small counter serving snack food 24/7 was also available at The Lido, a perk no doubt appreciated by the many late night casino-goers, and by me — I visited for supper on two of the three nights.

Beyond the "inclusive" options, you can also top-up to dine at "specialty restaurants". On World Dream, these included the steakhouse and seafood grill, an al fresco hotpot option, as well as our personal favourite, a Japanese restaurant called Umi Uma.

Do note that an 18 per cent service charge is applied at all F&B venues on the cruise — just marginally higher than the ++ in Singapore restaurants.

And while we tried all of the specialty restaurants (of course we had to, for work, you see), we would have been equally happy with the "inclusive" buffets instead.

The same applies for activities as well. While certain attractions — such as the virtual reality and arcade games — will cost extra, others like mini-golf, rock climbing, and water slides can be enjoyed as part of the basic cruise package.

Even with the travel bubble between Singapore and Hong Kong finalised, getting to actually leave Singapore remains a rare experience in these times.

Amid this backdrop, a cruise to nowhere can feel like more of an escape than a staycation, for the same price.

Cruises to nowhere or staycation? We hit the streets to find out