[UPDATED on Thursday, Nov. 4 at 4:37pm: The article has been updated with Foodpanda's response to Mothership's queries.]

What would you do if you asked for extra chilli with an order of chicken rice, and the meal arrived at your doorstep without the extra chilli?

Would you feel disappointed for a while and then shrug and move on with life?

Or would you ask FoodPanda for a full refund and then take to Facebook to complain when the refund request is denied?

One woman in Singapore, who claims that her order was placed for an elderly neighbour who did not know how to order food online, took the latter route.

Placed order with special instructions for extra packet of chilli

In a post on Facebook group Complaint Singapore, the woman claimed that she placed an order for roasted chicken rice on Foodpanda at 11:21am, to be delivered at 12:45pm.

She wrote that she had included special instructions for the chicken to consist of wings, and requested for an extra packet of chilli.

In order to ensure that her order was correct, she said that she sent a message to customer service, and "managed to get the customer service to confirm that they had called the restaurant and adhere to the order".

No extra chilli upon delivery

However, when the food arrived at 12:45pm, the woman wrote, the extra chilli was nowhere to be found.

Thus, she sent a message to complain to Foodpanda.

Foodpanda responded by offering her a S$4 voucher for the mistake, but the woman was not happy with that.

Instead, she wanted to cancel her order.

She wrote: "I wanted my extra packet of chilli and had done all that I can to ensure that it was followed."

She claimed that the "part that made [her] really angry" was when Foodpanda's customer service response, that she "[should] be glad" that she got S$4 as compensation, because of her request for a chicken wing.

"If there’s any FOODPANDA executive reading this, pls reach out to me. Because your personnel who answered my query was very unprofessional and rude."

Drove to get extra packet of chilli

In the post, the woman added that because she did not want to disappoint her elderly neighbour — who had asked the woman to help place the order online — she drove to get the extra packet of chilli for her.

She added that her issue was not about the compensation, although "it would have been great if there’s a total refund because I was about to reorder".

Instead, she said, it was "the total lack of Disregard (sic) for customer that really angers me".

"FOODPANDA you’ve got a great delivery platform - don’t let your incompetent staff spoil it for you," she wrote.

In response to Mothership's queries, Foodpanda said that they appreciate the customer's continued support and her feedback.

The Foodpanda spokesperson said that the woman was offered a compensation voucher "as a way to make up for her experience", as delivered orders cannot be cancelled.

"We take our customers' feedback very seriously. We will look into this matter and continue to review our customer services processes to ensure the best possible experience."

However, the post has elicited comments defending Foodpanda, saying the delivery platform is not to be blamed.

This was so as the food was ultimately packed by the eatery.

In such cases, plausible-sounding explanations as to why the extra chilli was not given could be because the eatery might have forgotten, missed the special instruction, or refused to adhere to the request by neglecting the customer's instruction for extra ingredients. 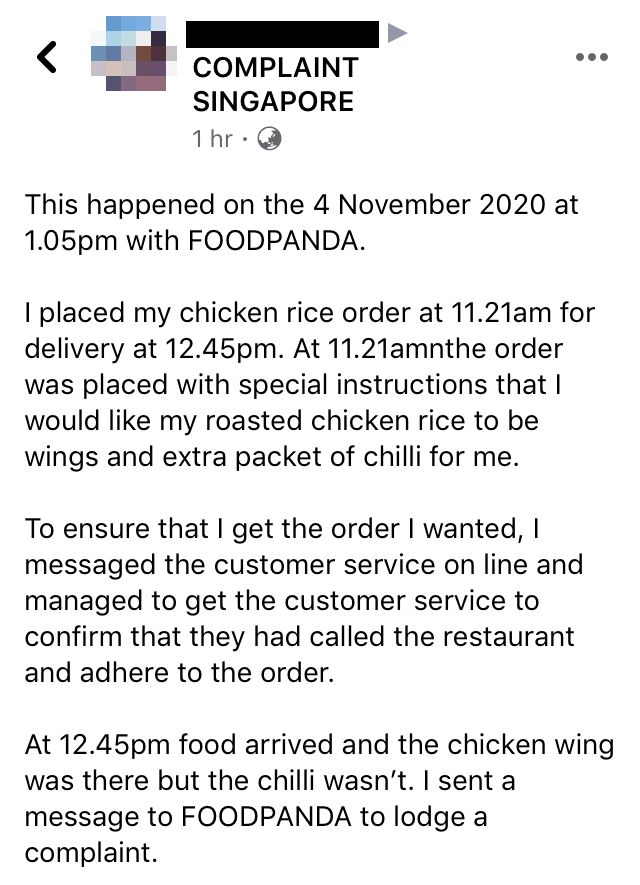 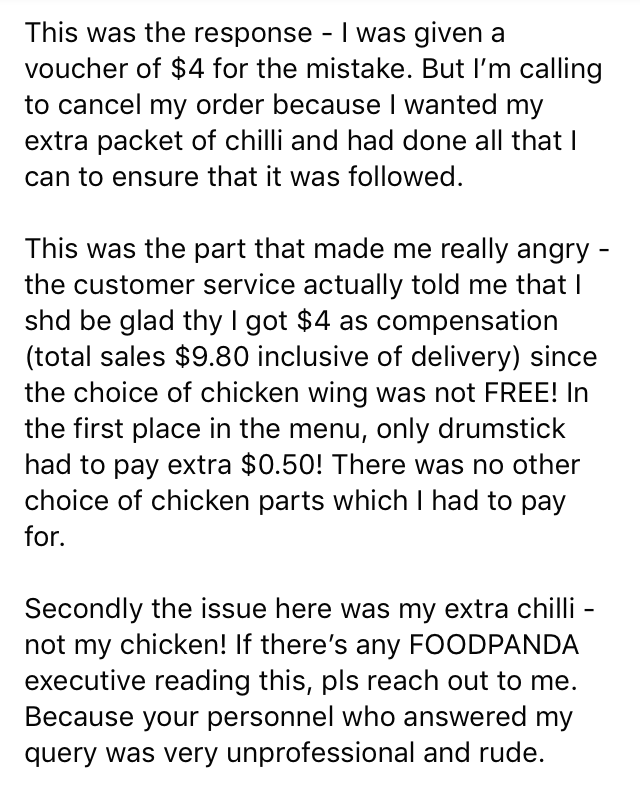 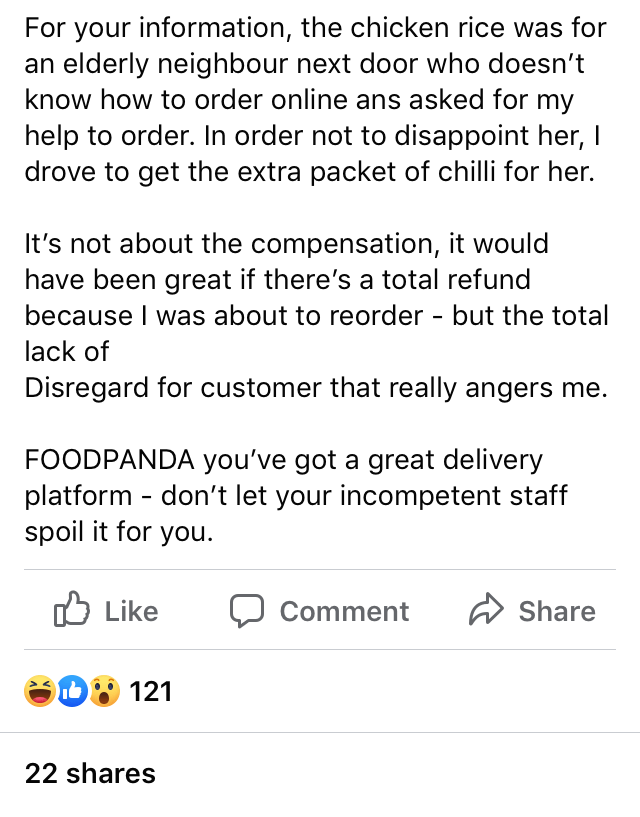