Comment: In June 2020, it was reported that the Singapore Airlines burned through half the S$8.8 billion it raised. And as SIA continues to struggle financially, there are some questions that hang over the airline as the Covid-19 driven crisis unfolds.

How effective has its crisis response been? What have they been spending or saving on? And most crucially, how financially prudent is the airline's fuel hedging strategy?

It is tough times ahead for the Singapore Airlines (SIA), which reported a net loss of S$212 million, its first in its 48-year history, according to their FY2019/2020 annual report.

Spent half of the S$8.8 billion in two months

Ever since the Covid-19 pandemic hit, SIA has reacted accordingly, cutting group expenditure across the board.

The airline has cut staff costs significantly, through a combination of retrenchments, pay cuts and offering early retirement and no-pay leave options to its staff.

Over 6,000 SIA group staff have taken up no-pay leave since they were first offered the scheme in March 2020. Some 2,400 jobs were also subsequently cut across SIA, SilkAir and Scoot.

In September, CNA published a commentary by Nitin Pangarkar saying that the government should continue supporting SIA as our national carrier.

However, there are some questions to ask about the national carrier's moves over the past few years.

Two months after raising money from share sales, the national carrier has burned through half of the amount.

A breakdown of where the money went to:

Overseas, there is talk that the US airlines are seeking a second bailout.

With SIA already burning through half its share sales, it looks likely that SIA will need more financial support from the government and/or TH in the coming years.

With this in mind, a few questions on its cost-cutting measures hang over the airline as the crisis unfolds.

How effective are the salary reductions of senior management?

Businesses in Singapore have announced wage cuts amidst the Covid-19 downturn, with SIA being no exception.

SIA CEO Goh Choon Phong led the pay cuts in SIA with a 15 per cent reduction in his salary earlier this year, The Straits Times reported in February 2020.

Looking at the annual report for FY19/20, which ended in March 2020, it noted that the SIA management team took pay cuts of 10-30 per cent of their basic salary, with the CEO taking the largest cut of 30 per cent.

The SIA Board of Directors voluntarily took a 30 per cent reduction in their fees.

Goh's total declared salary was S$1,374,960, after accounting for the additional month in March where the wage cuts kicked in.

It was reported that starting August, his salary will be slashed by 35 percent.

All staff at the rank of manager and above will also see more cuts to their basic salaries.

These wage-cutting measures arguably go into saving more jobs in the long run.

But does it help much?

Speaking to S&P Global, Robin Ferracone, CEO of a corporate governance consultancy, said that salary reductions at the executive level are more of a signal to the public as well as employees rather than an actual cost-saving move.

Besides, Ferracone also explained that a CEO's salary alone does not always account for the majority of his/her compensation, given that there might be other components like annual bonus or stock-based incentives.

Looking at Goh's compensation, a sizeable portion of it -- over half to be exact -- can be attributed to bonuses and shares. Looking at the total breakdown of SIA's expenditure for the past financial year, a good 16 per cent was spent on staff costs. It is understandable that one would look at reducing the expenditure in one of the areas where a largest portion of spending is recorded.

But according to Human Resources Director (HRD), businesses should first reduce non-wage costs and tap on government support before trimming wage costs.

Looking at non-wage costs, the next big item SIA is spending on is fuel.

With a solid 4.5 per cent cost as a result of ineffective fuel hedging.

Which brings us to our next question.

How much is lost due to ineffective fuel hedging?

According to SIA's annual report for the last financial year, the airline lost a total of S$710 million due to ineffective fuel hedges. 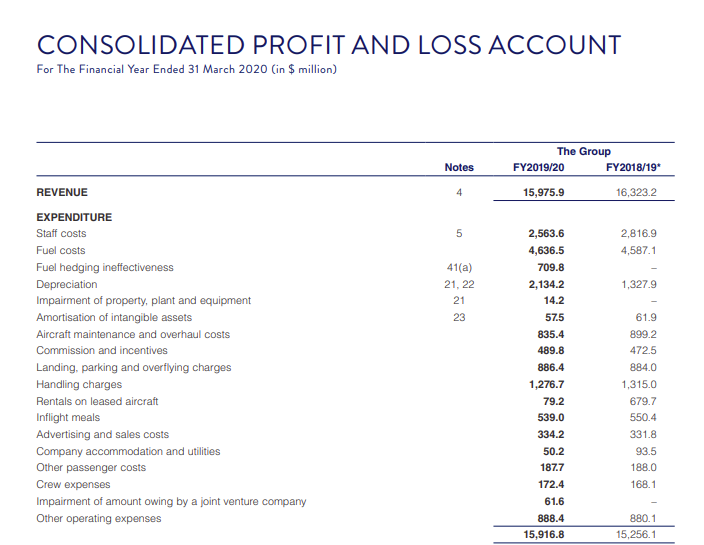 To put this into perspective, that's more than a quarter of the group's staff costs for the entire year.

But how does fuel hedging work, and how did SIA manage to lose so much money doing so?

Fuel hedging essentially works like this: the airline will purchase a certain amount of fuel in the future at a predetermined price, which allows the airline to keep operating costs stable, especially if the oil market is volatile.

If fuel prices go up, then it's a win for the airline: it has already secured its fuel at a lower price, and will not be affected by the rise in prices.

Conversely, if fuel prices go down, then the airline would have essentially overpaid for its fuel.

And this is exactly what SIA did in the last financial year: they overpaid S$710 million for their fuel expenditure.

SIA's fuel hedging policy: Isn't it time to do something about it?

This is not an isolated incident either.

In the past 10 years, SIA lost more than S$2.3 billion in total due to ineffective fuel hedges:

In fact, in the financial year ending in 2016/2017, SIA extended their fuel-hedging contracts to as long as five years, from their usual maximum of 24 months, according to The Straits Times.

This was done in anticipation of rising fuel costs.

Interestingly enough, this decision to double down on their fuel-hedging contracts came after several years of consecutive losses due to ineffective fuel hedges, with a total loss of S$2.1 billion between FY14/15 and FY16/17.

So the question remains: should SIA change its fuel hedging policy, given that it has led to more losses than gains?

A recent commentary published by our national broadsheet ST certainly seemed to think so, as it argued that the airline's fuel hedging policy is due for a review.

According to ST, SIA should at least rethink its five-year hedge, given that no other airline is known to have such long fuel hedges.

And perhaps the airline should go further.

Out of the last 10 years, SIA benefited from fuel hedging for five years, and lost money in the other five years.

Given these numbers, it's perhaps about time that our national carrier seriously reconsiders their fuel hedging policy altogether.

Its fuel strategy, unfortunately, is largely set in stone for the near future.

SIA's longer fuel-hedging contracts, which were signed in 2017, will continue till 2022, which leaves SIA little room to manoeuver for the time being.

But what about capital expenditure? Can SIA reduce it significantly in the next few years?

In FY19/20, SIA's capital expenditure was reported to be around S$5.1 billion, 97 per cent of which was on aircraft, spares and spare engines.

On May 16, ST reported that SIA will cut capital spending this financial year by at least 12 per cent, with the final reduction to be determined with planemakers Airbus and Boeing.

Unfortunately, it may be difficult for SIA to reduce it by much more than 12 per cent, at least for this fiscal year.

Brendan Sobie, an independent analyst in Singapore, told Mothership that while SIA will defer aircraft deliveries for the upcoming years, it is "difficult to significantly defer deliveries for this year".

He also said that while SIA may not have given an updated capital expenditure forecast since May, he does not think that it will be significant, as most of the aircraft will still need to be delivered.

Sobie did acknowledge, however, that the airline could possibly defer some of these aircraft deliveries to the following fiscal year.

So what does this mean? This means that for SIA to cut down on its capital expenditure in upcoming years, this will depend heavily on its negotiations with Airbus and Boeing, in order to delay future orders as much as possible.

Fortunately, it is not impossible for airlines to delay orders that have already been made.

Qatar Airways announced in June that it will not take any new planes until at least 2022, noting that new deliveries could be pushed back to as long as nearly eight to 10 years later.

Similarly, Cathay Pacific has announced that it would stretch the arrival window for new aircraft, which were supposed to be delivered in 2021, to 2023, citing the need for cost-saving measures.

SIA can likely delay some aircraft orders, at least the ones that are not due for delivery this year.

However, this may mean that it would have to put its long-term fleet renewal plan on hold.

The airline has stated recently in its annual report that it remains committed to its longer-term fleet renewal programme, even as the Covid-19 pandemic shows no sign of abating.

Seeing as its turbulent times ahead for SIA, it is likely they will need to make tough decisions if they wish to survive.

And these decisions need to be made sooner rather than later.