A dog-loving couple in Singapore tried on a shock collar and a prong collar on themselves in a bid to feel what it is like for a dog to do so.

And they were repulsed by the experience.

Devices used by some to train their dogs

The black device is the shock collar, while the metallic one is the prong collar.

The shock collar delivers an electric jolt remotely by the trainer as way of shocking the animal into compliance, while the prong collar has blunt metal hooks to be worn around the neck to deter the wearer from making sudden movements.

According to the post, the wearer of the shock collar is left anticipating the next jolt, which was more uncomfortable than the feeling of physical pain as a result of the shock.

I expected it to be uncomfortable but I had no idea how painful it would really be. I had to remove the shock collar immediately for fear of being shocked again. It’s not just the physical pain that’s scary. The anticipation and not knowing when you will be shocked again is actually worse than the physical pain.

The prong collar, on the other hand, was less painful to wear but still caused discomfort if it was tugged against the neck. The prong felt slightly less painful. I ‘checked’ myself a few times and could feel the discomfort. Imagine someone doing this on you every now and then without any warning? I removed the collar and was shocked to see red marks around my neck. And these marks were created by just very low controlled forces. 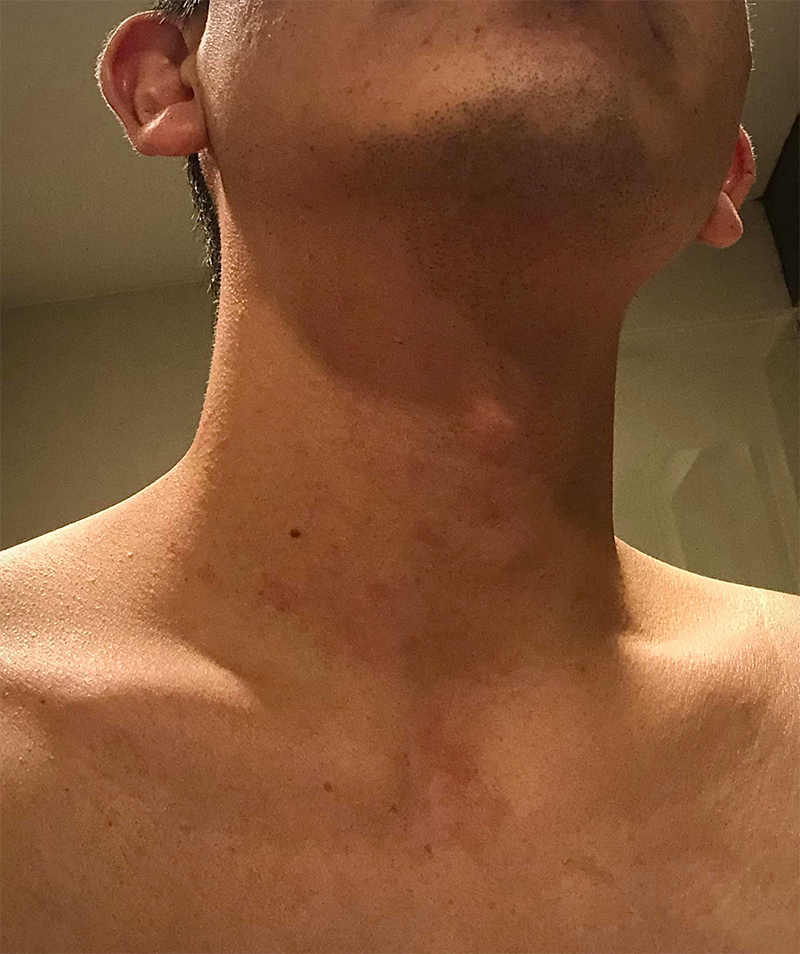 Don't use such devices for training dogs

In his post, Gan Theng Wei, the dog owner who experimented wearing the two collars, wrote that such devices have no place in training methods.

He wrote that "aversive tools" are "meant to inflict pain on dogs physically and also psychologically".

"Any use of such tools recommended by dog trainers to train your pets only show how incompetent they are," he added.

"Next time when a trainer tells you that such tools are ok 'when used correctly', sack them."

He also said: "There is no correct way to hurt a dog."

In response to queries from Mothership, Gan said: "My point is, with good understanding of canine behavior and learning theories, there are a lot of better and more humane ways to train a dog."

"If you need to resort to a prong collar just so your dog can stop dragging or lunging, then you are either a lousy trainer or ill-informed owner."

According to multiple websites on dog training, the use of electric and prong collars is common enough, so much so that those who have an aversion of using such collars are labelled as "pure positive" dog trainers.

Websites and online resources that explain why such collars are suitable to be used justify the process as beneficial for dogs that would otherwise not learn the right etiquettes and risk being given up or put down.

Access to these devices in Singapore appear to be unregulated.

Shock and prong collars are readily available for sale and purchase, with a shock collar costing anywhere from S$20 or more to prong collars that can be bought for S$3 and shipped from overseas.

The use of shock collars has been frown upon by SPCA Singapore and veterinaries operating here.

But it is not known how widespread is the consensus.

On Oct. 2, SPCA Singapore wrote that they are renewing their call for the government to ban the electric shock collar as the device has no place in animal training.

In response to Gan's Facebook post about his experiment, West Coast Vetcare wrote that electric collars, prong collars and choke collars for dogs should done away with.

The veterinary clinic also said the onus of training is on trainers to expand their knowledge and techniques: "Trainers are supposed to be proficient in learning science and behavior theories and should know better than to encourage the use of these tools."