Earlier this year, the McSpicy was part of a trial chicken-only menu in South Australia, including other burgers such as the Teriyaki Burger and the Chicken Schnitty Burger.

Now, the McSpicy has become a permanent edition to the McDonald's menu across Australia.

The official promotional video showed a Caucasian woman, who claimed she liked spice, doing a taste test of the fan-favourite burger.

She called it "very spicy", and had to take a sip of beverage immediately after taking the first bite of the burger.

However, Australian netizens seem to disagree with the burger's spicy moniker, with some claiming that it tastes more like KFC's Zinger burger. 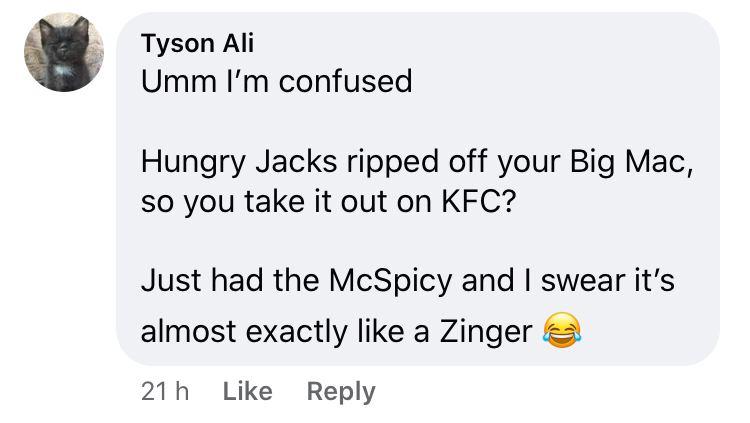 Others claim that the burger is far too mild to be called the McSpicy.

On the bright side, at least one person felt that the burger lived up to its reputation.

Food review channels were all over the new offering as well.

Greg's Kitchen gave it a positive review saying it was really spicy, though he noted that there weren't too many ingredients on the burger.

A Singaporean Redditor based in Melbourne noted that it tastes "very similar" to Singapore's McSpicy, although it is a "tad bit less spicy" compared to the Singapore version.

Redditor u/ohgodwhyalwaysme said that he would not be surprised that the burger's spice levels was toned down to suit the local palate, although he acknowledged that it could taste less spicy partly because he was eating the burger in cooler weather.