One tree growing at Clementi Ave 3 has garnered some interest online — mostly due to its unconventional location.

Instead of taking root in the soil like its fellow flora, the tree was spotted growing on the pillar of the building.

One Kelvin Gan first snapped a photo of the sight and shared it to the Urban Farmers Facebook group.

Gan described the sight as "amazing", sparking some healthy discussion in the comments as to how exactly the tree was capable of growing on such a surface. 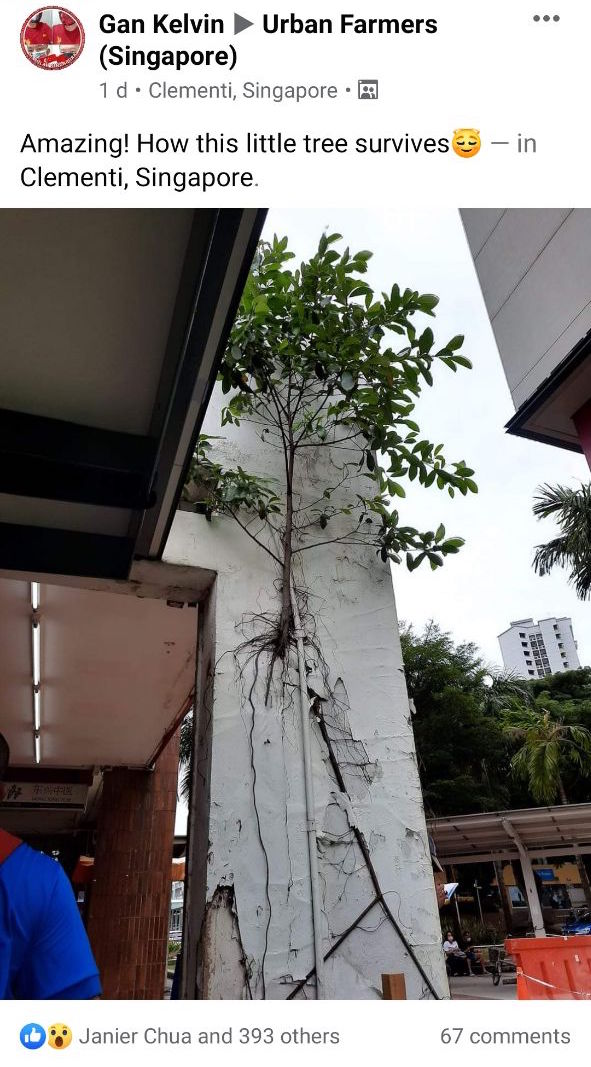 Although reactions online appeared to consist of mostly awe and surprise, those on the ground appeared more lukewarm.

When Mothership went down to Blk 449 at Clementi, it seemed that not many passers-by actually noticed the tree's strange placement.

This was despite the pillar being located right next to a bustling Singapore Pools store.

Upon closer inspection, the tree, which numerous Facebook users identified as a fig tree, had actually broken through the paint and plaster on the pillar.

Some of its roots were still connected to the patch of soil below.

Not a safety concern

When Mothership spoke to some passers-by, one man who declined to reveal his name said he had never noticed the tree in the two to three years he had stayed nearby.

When asked if he believed the tree's growth was a cause for concern safety-wise, he said that perhaps older folks might think that the roots penetrated into the concrete of the pillar.

"But aiyah, to me it's ok, no danger," he waved off the question. He did however, acknowledge that in the long run, the cracks and holes caused by the tree might result in a termite infestation.

"But the root cannot grow inside la, because there's no food," he said. "The wall won't break, alamak."

In contrast, a female safe distancing ambassador stationed outside the Singapore Pools shop commented that she had noticed the tree before.

This was only after the section of the walkway which the tree faced, which leads to the new HDB estate Clementi Crest, was opened earlier this year.

Construction for the new estate started in 2016 and she speculated that the tree had likely grown on the pillar during that period.

On the topic of the tree potentially being removed or pulled out due to safety concerns, the safe distancing ambassador added that the tree added some "greenery" to the surroundings, and that it would be “unfortunate" if it was removed.

“It's rare to see a tree grow like that," she said.

Similarly, the man sighed at the thought and explained: "I like scenery, I like plants, all the green".

Referencing the various forests and trees being felled to make way for urban development in Singapore, he quipped that "[the tree] probably take very long time to grow, it's not one month or two months. But if [the authorities] really want to take out, it's very fast."

"You have to decide [what to do] ah", he chuckled.