South Korean K-Pop boyband BTS angered fans and netizens in China after the band's leader made a comment regarding the Korean War in their acceptance speech for the General James A. Van Fleet Award.

The award is an honour given out annually by United States-based non-profit organisation Korea Society to individuals and institutions that have contributed to the development of U.S.-South Korean relations.

During their acceptance speech at the virtual ceremony, BTS leader Kim Nam-joon, known by his stage name as RM, said that the ceremony this year was "especially meaningful", as it marked the 70th anniversary of the Korean War.

The Korean War between 1950 to 1953 resulted in the official split between North and South Korea into two countries, where the north was supported by communist forces from China and the former Soviet Union, while U.S. forces defended the south.

"We will always remember the history of pain that our two nations shared together and the sacrifices of countless men and women," RM said.

"As members of the global community, we should build a deeper understanding and solidarity to be happier together."

Social media users in China were incensed at the band member's statement, accusing the band of ignoring the feelings of the Chinese people, and bringing up the fact that many Chinese forces died during the war as well.

On popular microblogging site Weibo, where nationalistic sentiments tend to be amplified, many called for the boycott of BTS, leading the hashtag "BTS insults China" to become a trend.

Some also attacked fans and users who defended the boyband.

"Take your parents' money and give it to those who vilified your parents, that's top-notch filial piety." 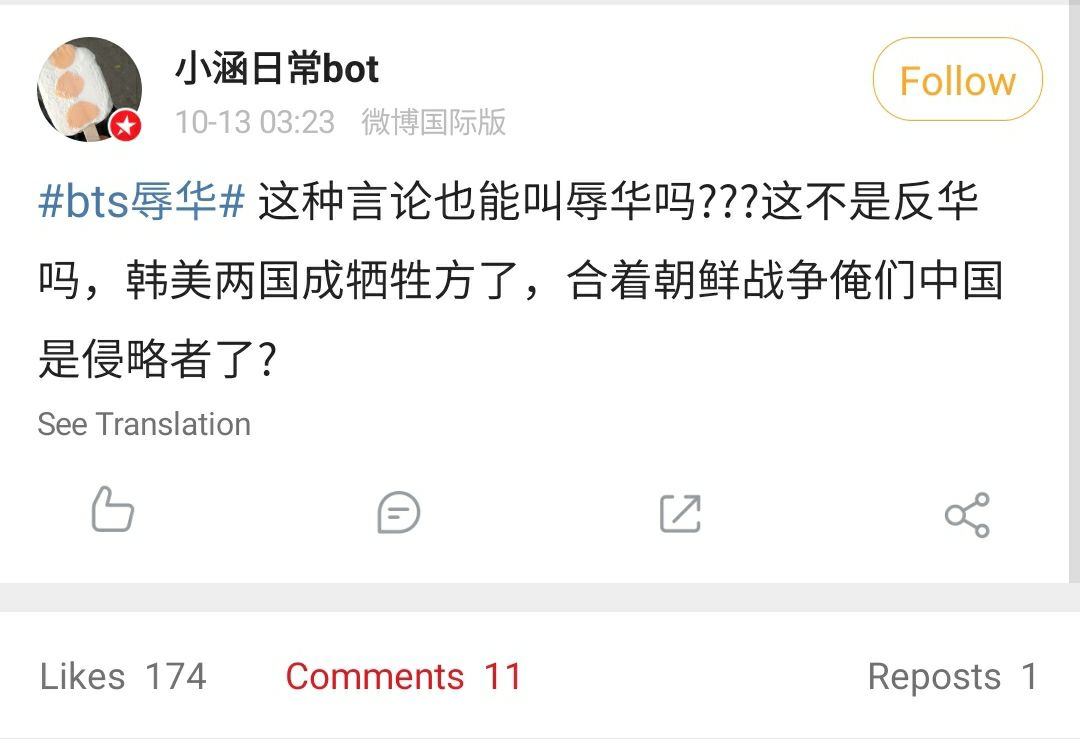 "Can you even call this 'insulting China'? Isn't this anti-China? South Korea and America have become the sacrificial heroes, while China who fought with North Korea has become the invaders?"

Fans of other K-Pop bands also commented on the issue, seemingly adding oil to fire. 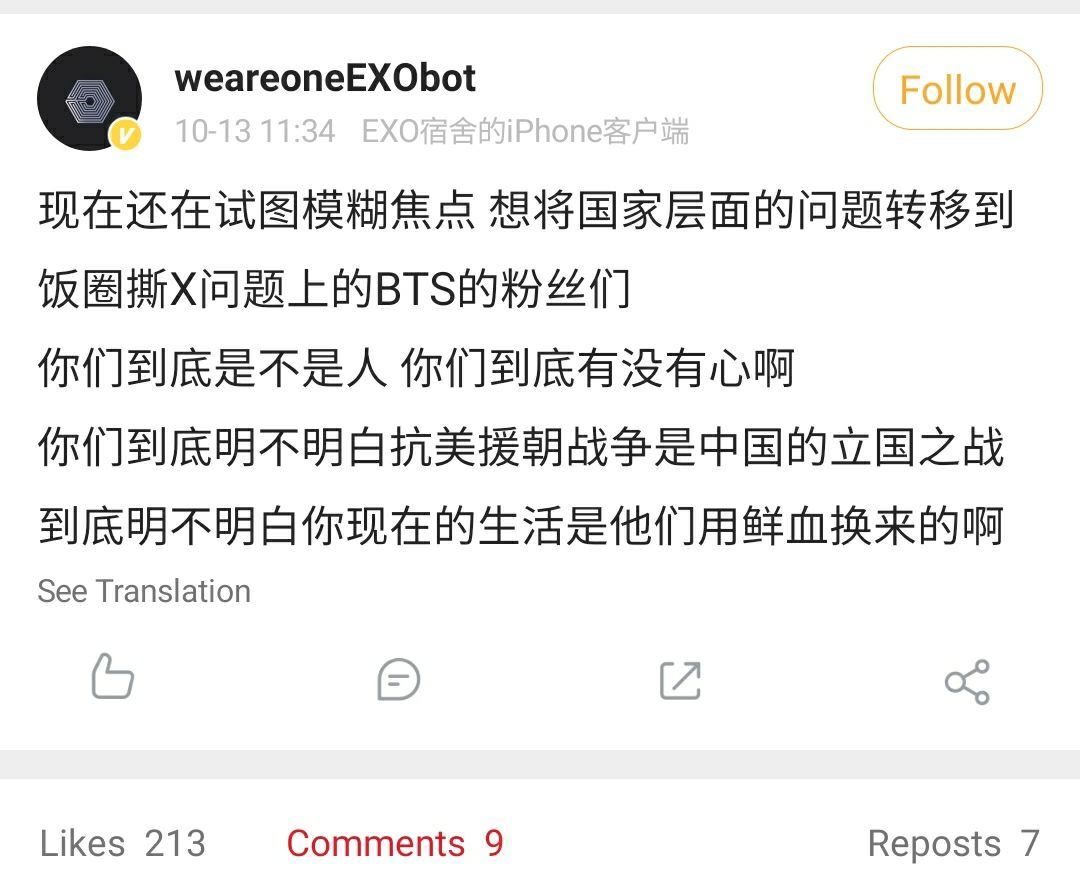 "While things are still pretty chaotic right now, I want to ask this question of national importance to BTS fans:

Are you guys even human? Are you all heartless? Do you even understand that the Korean War is the defining war of our nation? Do you know that your current lives are built on the blood of those who died then?" "Haha, it's unsurprising for such an unreliable company (BigHit) to produce this type of talent. Who the hell are these BTS fans who are willing to pay for their idols' behaviour? So these are your 'boyfriends'?

Oh, by the way, South Korea was also called Joseon (North Korea's current name in Mandarin), just that they're called South Joseon now. Their country was torn into two, and now the South has become America's dog."

Chinese people should put their country before their idols

Another user pointed out that it was alright for the South Korean boyband to show appreciation to the U.S., but that Chinese BTS fans should put their country before their idols. 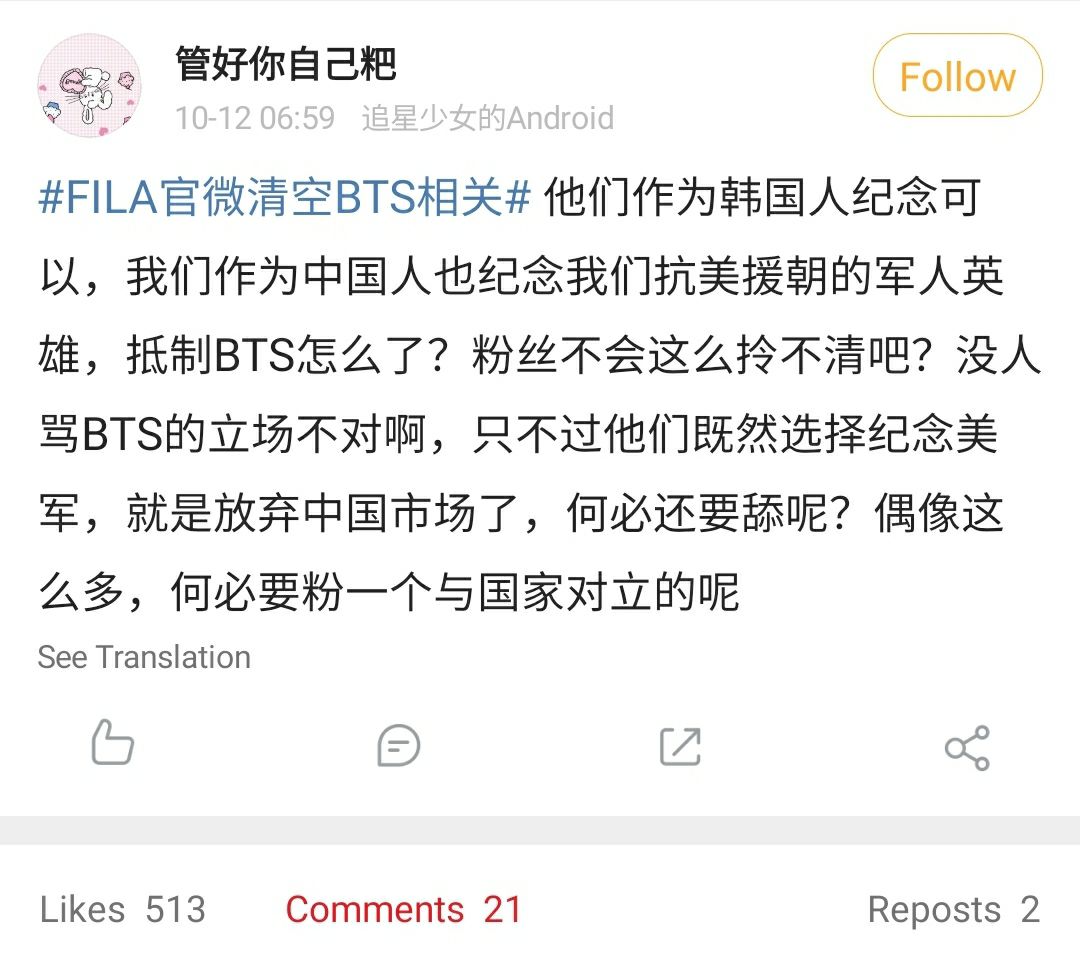 "It's okay for (BTS) to commemorate (the Korean war) since they are South Korean, but as Chinese people we should also remember our own war heroes.

Are BTS fans just so muddleheaded? Nobody's saying that BTS's position is wrong, but since they've decided to remember American soldiers instead, it means that they've given up on the Chinese market.

What's there to argue about? There're so many idols, why would you support one that's against your country?" 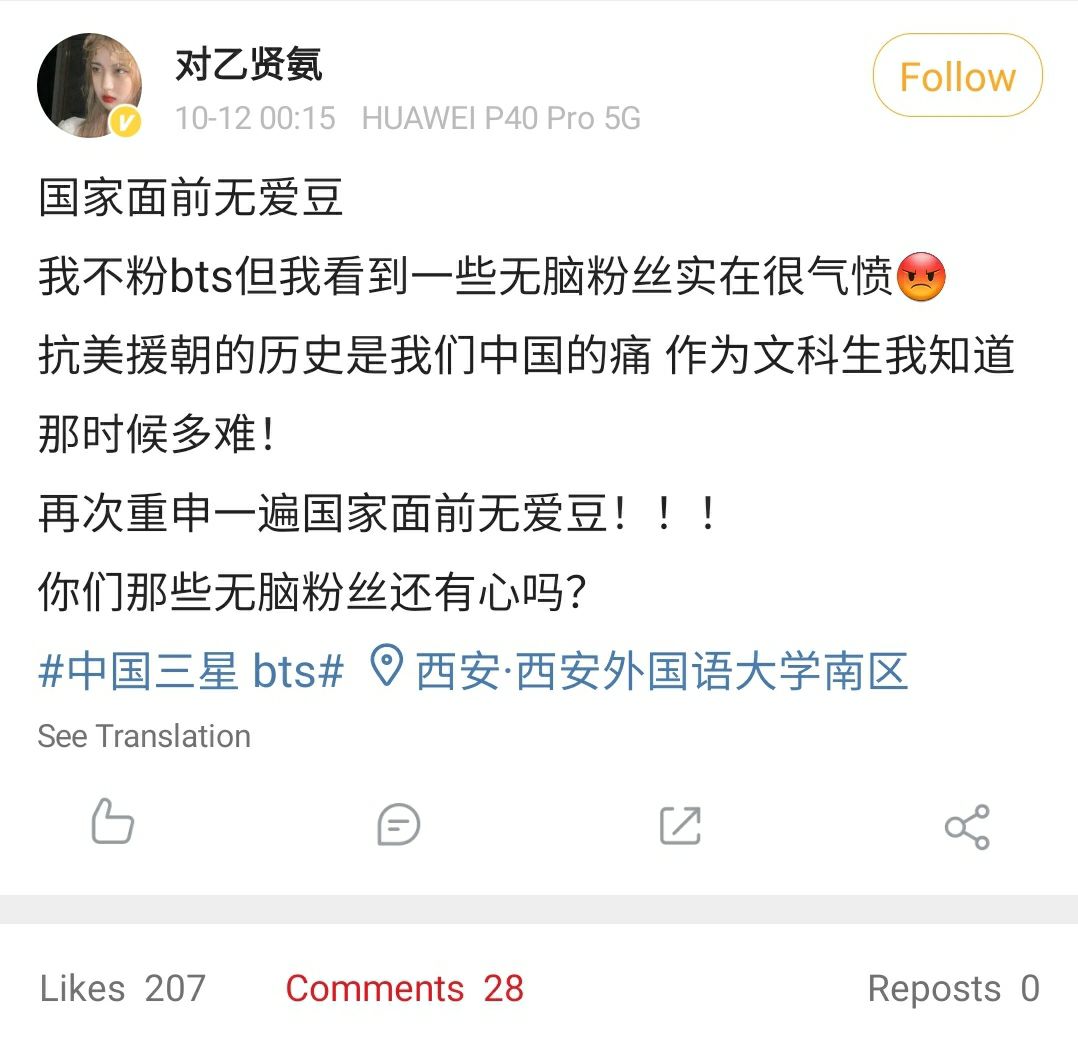 "Your country is more important than your idols. I'm not a fan of BTS, but seeing some of these brainless fans really infuriate me. The history of the Korean War is the pain and anguish of China. As a history student, I know how painful it was back then!

I repeat, no idol is more important than your country!!! Do you brainless fans still have a heart?"

A number of fans on Weibo also expressed disappointment in the boyband, bidding their "farewells" to BTS. 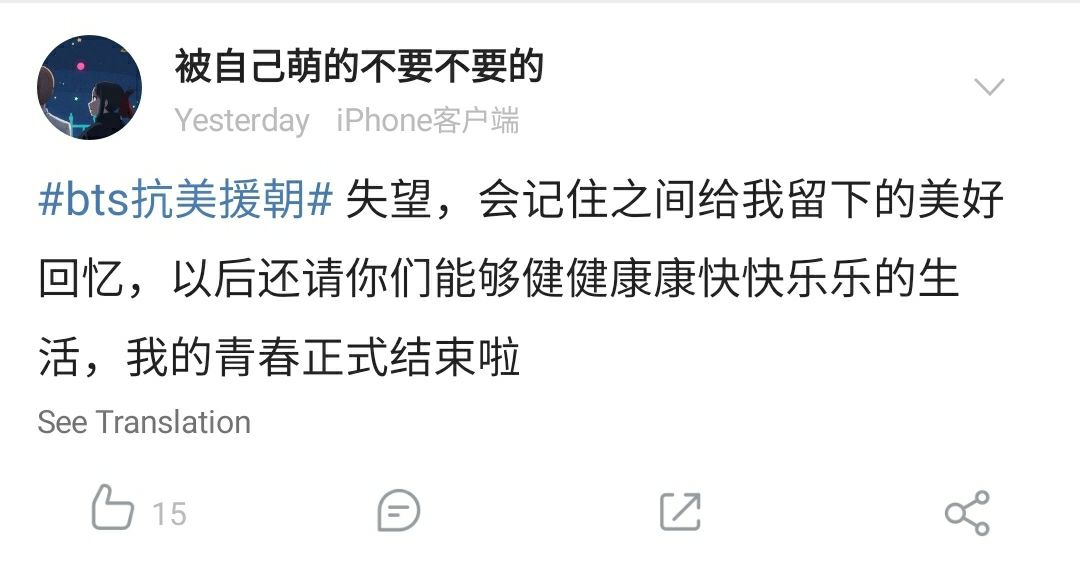 "I'm disappointed. I'll remember the good memories you've given me, hope that you guys will stay healthy and happy. My youthful days are officially over."

Some users jumped to the boyband's defence, calling the netizens' accusations netizens unreasonable. 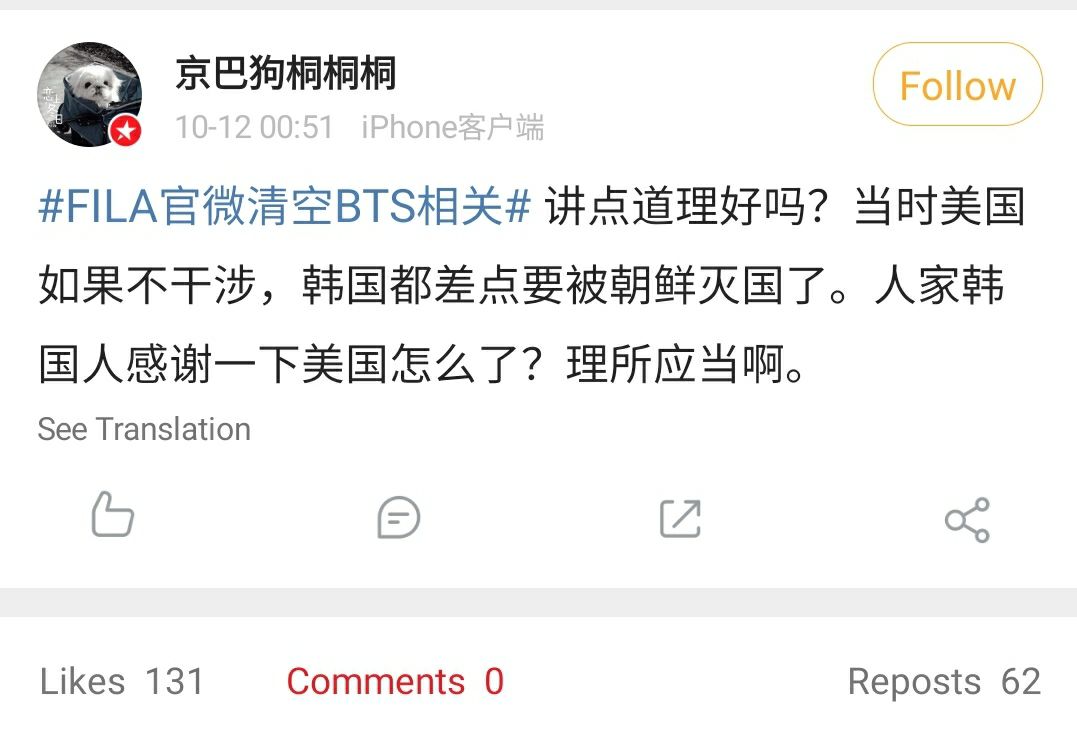 "Can we all be more reasonable here? If America didn't step in at the time, South Korea would've been completely annihilated by North Korea. What's wrong with some South Koreans showing appreciation for America's help? It's appropriate."

Support for the band poured in on Twitter after the backlash on Chinese social media, where a large number of mostly non-Chinese Twitter users defended the members, saying that the comment by RM had nothing to do with China.

This is ridiculous. He didn't say anything wrong. The van fleet award is about the relations between the United States and South Korea specifically. Why would he talk about any other country?? I find it very disrespectful for China to make these false accusations against BTS.

Some were puzzled as to how the whole issue was related to China.

I am totally pissed off with the exaggerated Chinese reaction on BTS Van Fleet Award speech. How the hell did that award relates China. The award was for the relation between US and SK while China alliance with North Korean while led to division of the peninsular into two.

The matter has also been heavily politicised, with Hong Kong activist Joshua Wong commenting on the situation as well.

In the aftermath of the backlash, major South Korean brands, such as Samsung and Hyundai have pulled products featuring BTS from online platforms in China, according to Financial Times.

However, both brands have not issued any statements regarding the incident.

Big Hit Entertainment, the label managing the band, has declined to comment on the issue as well.

On the other hand, the Chinese foreign ministry has voiced its opinion over the kerfuffle.

Zhao Lijian, the spokesperson of the Chinese foreign ministry responded to media queries on the issue at a news briefing:

"Learning from history and looking toward the future by cherishing peace and promoting our friendship should be the common goal that we strive towards."

Debuting in 2013, BTS has become one of the most popular South Korean boybands in the world, and arguably the most successful in the U.S. market, topping Billboard 200 rankings multiple times in the last few years and becoming the first K-Pop artist to perform at the Grammy Awards in the U.S. at the beginning of 2020.

While K-Pop artists have been warming up to the Chinese market over the last decade, an "unofficial" ban was placed on South Korean entertainers from performing in China in 2016, in retaliation to the U.S.'s deployment of two Terminal High Altitude Area Defense launchers (THAAD) in South Korea, according to SupChina.

The K-Pop industry may still be wary about the volatile behaviour of Chinese authorities due to regional political tensions, resulting in many entertainers expanding their horizons and reaching out to Western countries as well.

According to SupChina, BTS has arguably been the most successful in expanding its global reach outside of the Asian market, especially in China.

While the boyband is popular in China, BTS has not set foot in mainland China since 2016, besides performing in Taiwan and Hong Kong.