He effortlessly rattles off the brands and model numbers of each of his pieces of equipment, which include microphones, a set of reference speakers, headphones, an audio interface, and a Macbook Pro. 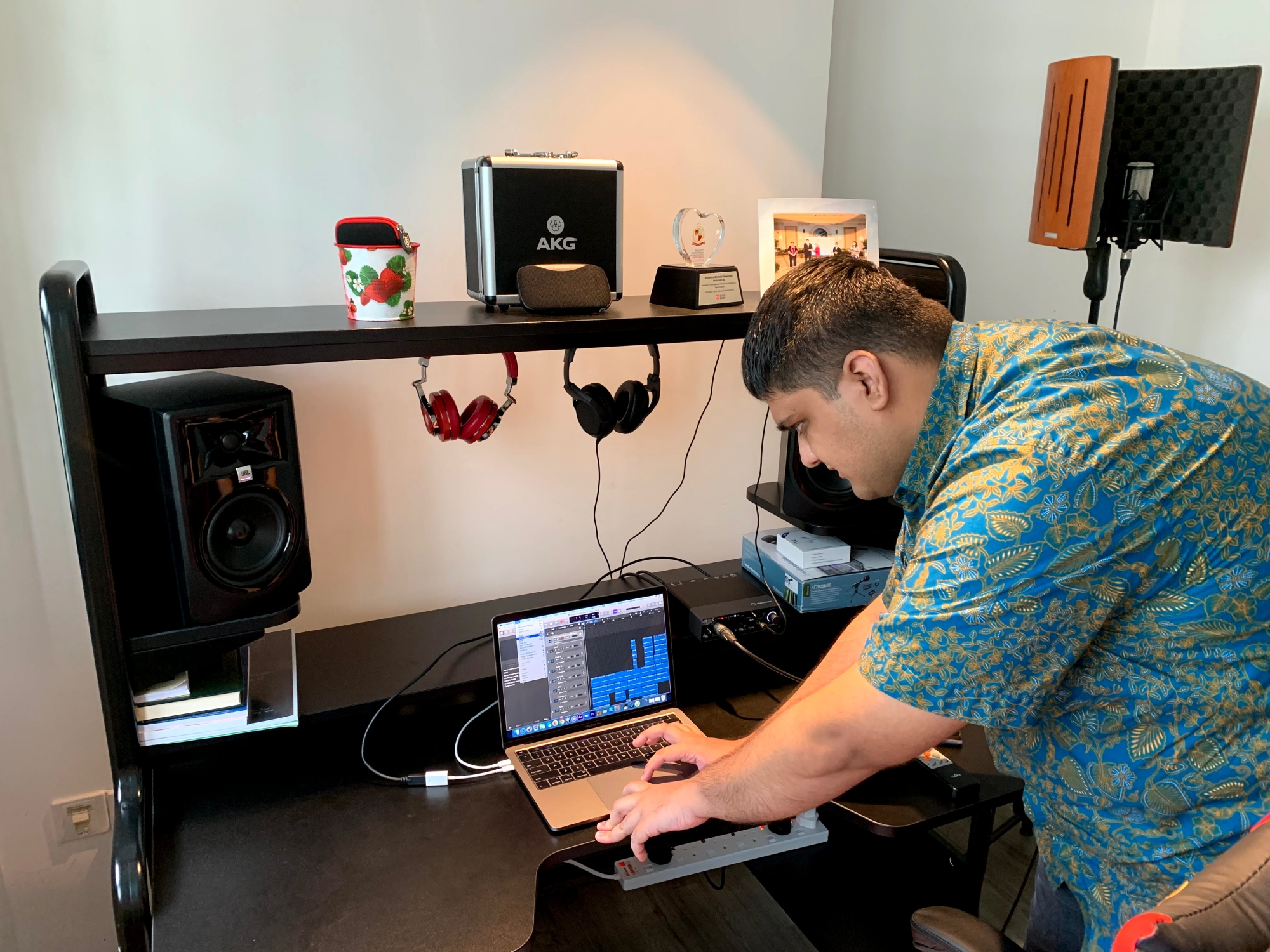 He shows me how he's been recording different parts of an acapella cover and stitching them together on his laptop, using audio production software.

Aside from the fact that the equipment looks fairly new, with some of their boxes neatly stacked under the IKEA table, I could hardly tell that it had only been set up in August this year.

Arshad is no ordinary producer. You see, he was diagnosed with autism and attention deficit hyperactivity disorder (ADHD) when he was in primary school.

His home setup has been made possible by the Mediacorp Enable Fund, which provides funds to persons with disabilities in support of, among other things, "their aspirations that are currently beyond their families' financial means".

Previously, Arshad says, he would do recordings on his phone, which he also used to edit and splice together video clips for an online concert that aired on YouTube on May 24.

Arshad has gone on to organise another two editions of the online concert, and, equipped with his new gear, has been working on his singing portfolio by recording covers as well as original songs, which he uploads on various social media platforms.

For his efforts, he found himself in the company of 30 other recipients of the President's Volunteerism and Philanthropy Awards (PVPA) on Oct. 16.

All this would have been unimaginable before the Covid-19 pandemic.

Arshad shares that he and his mother had been watching "One World: Together At Home", a globally-broadcasted fundraising concert during the Circuit Breaker.

That was where he got the inspiration to start something similar, of his own.

"After we watched that show, we were actually discussing... 'can we do a show similar to this?'" Arshad says.

But it wasn't just any talent show that Arshad wanted to organise. Instead, he wanted to showcase the talents within the special needs community in Singapore.

This came out of his desire to extend the opportunity to perform to individuals like himself, whom he felt might have missed out because they had special needs.

"I tried to showcase my talents many times... but most of the time... I don't get to the right people," he says, recalling auditions and talent shows where he would indicate on application forms that he had special needs, and end up rejected.

"I didn't want anyone else with special needs to go through the same thing," he adds.

"I thought to myself, like, 'what if other individuals with special needs also face the same struggles?' So I wanted to help the special needs community, to give them a platform to showcase their talents."

Arshad also decided that each show would take on a different theme.

"In each [of the] Inclusivity 4 All shows, I want to actually spread awareness for a current subject matter," Arshad says.

The first show focused on raising awareness for talents in the special needs community, while the second and third shows helped to raise funds for the Society for Prevention of Cruelty to Animals (SPCA) and the Jamiyah Children's Home respectively.

Starting from the first show, performers had been enlisted via a network of parents who also had children with special needs, with Arshad's mother helping with outreach.

"A lot of people actually sent their videos," she says, after she reached out to the parents to let them know what Arshad was planning.

She then encouraged him to reach out to "as many celebrities as possible" to get them involved.

Their hope was to add some star power to the show, which was scheduled for Hari Raya Puasa on May 24 and would have to compete for time on people's busy schedules.

A number of them replied via their agents requesting more information, then fell silent.

Needless to say, this was disheartening for Arshad.

"You are no one, okay? So if you want to be someone, then you need to have patience," she says, recounting her advice to Arshad when things got stressful and emotional.

But patience did indeed come through for him, when not one but four hosts responded to his call for hosts.

Arshad shares that Fauzie Laily, one of the hosts for the show, came on board at the last minute, but recorded his hosting segments within one day.

With hosts sorted, Arshad hunkered down to getting the show ready in time.

"For one week, I was editing the videos non-stop, and then almost every night I'll be recording host segments for the video," he says.

This was no small feat, as Arshad was compiling and editing the videos on his phone, since he did not have a suitable computer at the time.

But the different pieces of the show came together, and on May 24, the inaugural edition of Inclusivity 4 All premiered on both YouTube and Facebook.

Growth through the process

Arshad has grown through the process of organising Inclusivity 4 All.

One of his key takeaways from the whole experience since May is his newly discovered love for hosting.

Before all of this happened, "I didn't know I could host!" he says affably, recalling how he initially had difficulty in stringing together full sentences on the fly.

"I can see that when he's hosting, he's expressing himself to people more," adds Nisha.

Arshad has dabbled in performing since he was very young, doing magic shows and dancing, before eventually finding his passion in singing.

Nisha shares how, during his first performances, Arshad would have to scan the audience and locate her before he could carry on with the show smoothly.

And even then, he would focus on her and not make eye contact with the audience.

However, in the online shows that were held in May, July, and October, one can see that Arshad grew increasingly confident and expressive.

Arshad says, "I feel good to host, I like hosting." He's also added it into his repertoire of skills — when asked how he would introduce himself, he says:

"I love singing, I love scriptwriting, I just found my new love for hosting also. I also love filmmaking and gaming."

And he is not stopping there.

So what's next for Arshad?

Besides organising more shows, and growing their viewership, he wants to set up a mentorship program for singers and performers with special needs.

He's already connected with a number of potential participants for the mentorship program, from the pool of performers that sent in video clips for his three shows.

He is quite taken with the idea of getting celebrities involved, saying that one reason he thinks that celebrities would be good mentors is that their young proteges look up to them, which would help them to be focused.

I wonder how much of this is rooted in his own experience of being a little starstruck from working with celebrity hosts for the first edition of "Inclusivity 4 All".

But Arshad is quick to highlight that celebrities, as experts in their field, have the requisite skills and experience to be mentors.

He also sees the value in close one-to-one interaction between mentors and performers, perhaps informed by his own experiences in school.

Even after being diagnosed with autism and ADHD at the age of 7, in primary school, Arshad remained in a mainstream school for several years, only transferring to a dedicated school for those with autism, Pathlight School, in Primary 5.

This shift was significant, as the closer attention from much smaller class sizes allowed him to focus better, and learn much more effectively, eventually graduating from Pathlight with N-level results he and his mother were proud of.

And there's no doubt that despite the award and the public recognition, Arshad remains grounded towards this next endeavour.

He candidly admits that a significant obstacle will be recruiting potential mentors, and that this is likely to be his main obstacle, given the difficulties he had already experienced in getting hosts for Inclusivity 4 All.

Nisha chimes in, explaining how Arshad has been temperamental in the past. "When he's angry, he's really angry", though music has helped him to calm himself down.

A song on Arshad's mind right now is "High Hopes", by Panic! At The Disco.

When asked what it means to him, Arshad says:

"[the songwriter] Brendon Urie is actually talking about his mother. It's like, he did his mother proud. That's the meaning of the song. And his high hopes have been fulfilled."

I can think of why the song is significant to him, especially since that sentiment has echoes in one of his original songs, "I Never Knew", where he sings "seeing all the things / on a big TV / wishing it was me".

Arshad says the song expresses his own experiences in making music and sharing it with others.

It is about "a singer who didn't know that when he goes through the path of singing, and opens up to friends and everyone else, that he would be able to share his experiences with them," he says.

Its poignant lyrics express the difficulties of a journey I can only imagine:

And deep in my heart / our love is still standing there  / and I finally learned to share, share"

Something tells me, however, that for all its ups and downs thus far, this plucky youth's journey has only just begun.

There are others, just like Arshad, who are making a difference in Singapore.

You can hear their stories in this TEDxSingaporeSalon sessions called "Our finest hour in the City of Good". Register for the free sessions here.