PERSPECTIVE: The hawker industry is a cutthroat one, with long, gruelling hours and slim profit margins. But for one 21-year-old in Singapore, he shares why the effort put into running his hawker stall is worth it.

Andre Ong first started frying Hokkien mee as a teenager while helping out at a stall his father worked at. That was the when Ong fell in love with the art of cooking.

In 2020, a 21-year-old Ong opened Youfu Fried Hokkien Prawn Noodle at Golden Mile Food Centre, which he runs with his father.

We sat down with Ong to find out more about why he chose to become a hawker, whether he's in it for the long haul, and why he's happy to work over 12 hours a day, six days a week.

Here's how our chat went.

You run Youfu Hokkien Mee with your dad. How long has your stall been around at Golden Mile Food Centre and why did you decide to open a hawker stall?

We have been here since March and this is the first time my family has a stall of our own.

This stall name, Youfu, is derived from my brother’s and my name. My brother is the You, and I am the Fu. My brother came up with half of the money, but he doesn’t know how to cook. I’m the one who has the passion for cooking. He’s the one who believes in me.

Who came up with the idea to sell Hokkien mee?

Yah really, 16. I told a lot of my friends that after NS I will be opening a Hokkien mee stall but they didn’t believe me.

Why didn't they believe you?

I also don’t really know… that’s a good question. (Interviewer: Is it because you always troll them or lie to them?) No lah, no lah! When I was young I was different. When I say things, people don’t take me seriously. I was very naughty as a teenager. When you’re immature, it’s like that. But now I’m different ah!

Now they’re like, whoa I can’t believe you really opened a stall. They will congratulate me.

It was the first dish that made me fall in love with cooking.

Oh, so when did you discover your passion for cooking?

When I was 14! I can remember. I went to help my dad, who was helping out at a stall in Changi Village. I didn’t really like being a cashier. Then, he asked me if I want to learn (cooking), I said, sure, why not.

That’s when I developed a passion for cooking. He taught me how to fry Hokkien mee and I realised, wow, cooking is really an art.

What’s funny is that, I didn’t take a cooking course in ITE. I took retail services. Everybody asked, "Why didn’t you take cooking?!" I said, I don’t know… I don’t see anything in studying cooking. It’s more hands-on for me. You go into the kitchen and that’s where you learn. Not in a course.

You mentioned you would help your father out at the Hokkien mee stall in Changi Village. What was that like for you, as a secondary school kid?

I have to go to school, so after classes I would go to help. Some days when I’m not lazy lah, (haha). But now is different!

(Interviewer: Did you ever resent needing to help out back then?)

To be honest, yes. Because I wanna spend time with my friends mah. It’s your youth! But I think at 18 years old I changed (my) thinking.

What was it like learning the ropes from your dad? How long did it take you to pick up the skill?

I have been frying Hokkien mee full-time only for half a year. It started out as preparing ingredients, or cashiering, before really learning to cook and fry.

(Picking up the skill) actually wasn’t so bad for me. If you ask those who aren’t willing to learn or don’t have passion, they’ll take very long to learn. Every day I will practise frying, my dad will keep repeating and repeating and I will just follow. But that’s what the previous stall’s way of cooking -- now we will improvise.

Actually you got to fry as you go… Really really! When I was learning, whenever a customer comes, I will just fry. That’s the reality what.

(Interviewer: What about if you make mistakes, would your dad scold you?)

Of course, every parent would nag or scold if their children makes mistakes. It’s normal. They do this so you will improve mah.

Have you ever fried an order that was a complete failure? How did you feel?

Wow…. Ya lah… I felt damn sad, really damn sad. Like you have all the ingredients and you spoiled it by doing this. Imagine you’re a customer and you want to eat the food but it tastes horrible. You’ll be disappointed! No chef wants their customer to be unhappy, they want to leave a smile on their face.

(When I opened the Beach Road stall), I still got some failures lah. Ups and downs lor. Initially, our Hokkien mee was very wet, and not many customers liked it. Then the noodle was also a bit tougher like al dente, then old people cannot chew. So we adjust and improvise.

What about now? Is the Hokkien mee that you cook different from your dad’s?

The Hokkien mee my dad and I cook are a little different...Taste-wise, I think people can tell the difference. There are some customers who will say lah. But we try not to let it come between us. People have different preferences.

If you like to cook, why not become a chef working in a restaurant or hotel? Why did you decide to become a hawker?

I used to work at Providore at Raffles Place in 2018, for six months, before NS. It was a full-time job and I cooked pasta, pizza, Western food. More of the Italian type.

But I think cafe food is very expensive mah and not affordable for some people. If I’m a hawker, I think everyone can try my food because it’s reasonably priced.

What is a typical day like for you? What time do you get up, or come to the stall?

I wake up at 6, and reach here at 7am. And I’m here all the way until 7pm. But after that we need to prepare stock for the next day, like we will prep some things for tomorrow, like the pork or minced garlic, in advance. I live in Serangoon North, it’s a 1 hour plus bus ride, so I reach home at 10+pm.

We (my dad and I) both work six days a week, only Monday is an off day. From 7am until 7pm we are here. Our opening hours are at 10am, and we used to open until 10pm, but these days we close earlier once we sell out. Around 7pm.

We used to open every day but we started having Mondays off only recently. Sometimes, if you don’t rest your body starts to work differently. You’ll be exhausted and angry and it’s very frustrating. It’s very very important to have rest. Health is much more important.

Many businesses struggled during the Circuit Breaker period. How has the Covid-19 period affected your business? Some businesses have tried to market themselves online as well. Is that something you're doing?

We’re on WhyQ. It’s not so bad, it’s very affordable for deliveries. I think we get like four to 10 orders from this app a day because not many people know about WhyQ.

We opened our stall here and one month later, it was the Circuit Breaker. I think it was like hell. It was a really very, very tough period. We came and open the stall, ready to sell, but it’s a ghost town. There was nobody.

There were some other stalls that closed. But we just used our money to hang on until the CB was over. But we have our losses!

My girlfriend started our Facebook page, she’s the one behind the computer. We are also on Instagram, that’s run by my brother’s girlfriend. Ya, they’re the women behind the scenes.

What are the highest and lowest points for you being a hawker?

Lowest point for me… I don’t think I have any because I feel really happy cooking! Okay lah, lowest point is when I cook, then the customer don’t like because everyone have different tastebuds. Some people say not nice, but that was at the starting lah.

(Interviewer: So would you say the high points for you are when someone tells you that your food is good?)

Ya!! Not a lot of people will come over and tell you that it’s nice. So when you receive that type of feedback, you feel a sense of satisfaction.

Most people just eat only what. They think we just (fry) this only. But ah, behind the scenes, wah a lot of things that we need to do. We need to cook our own chilli, cut everything, fry the pork lard. Sometimes the time is really not enough even though we come damn early.

But it’s worth it?

It’s definitely worth it.

I think I want to be able to achieve my dream. There are so many people with dreams but they don’t want to chase it. My ultimate dream is to become the best chef in Singapore. (Interviewer: And how will you know when you are the best?)

When I’m on the Top 10 chefs of Singapore list. (Editor's note: This is the list that Ong saw, and was determined to get onto.) 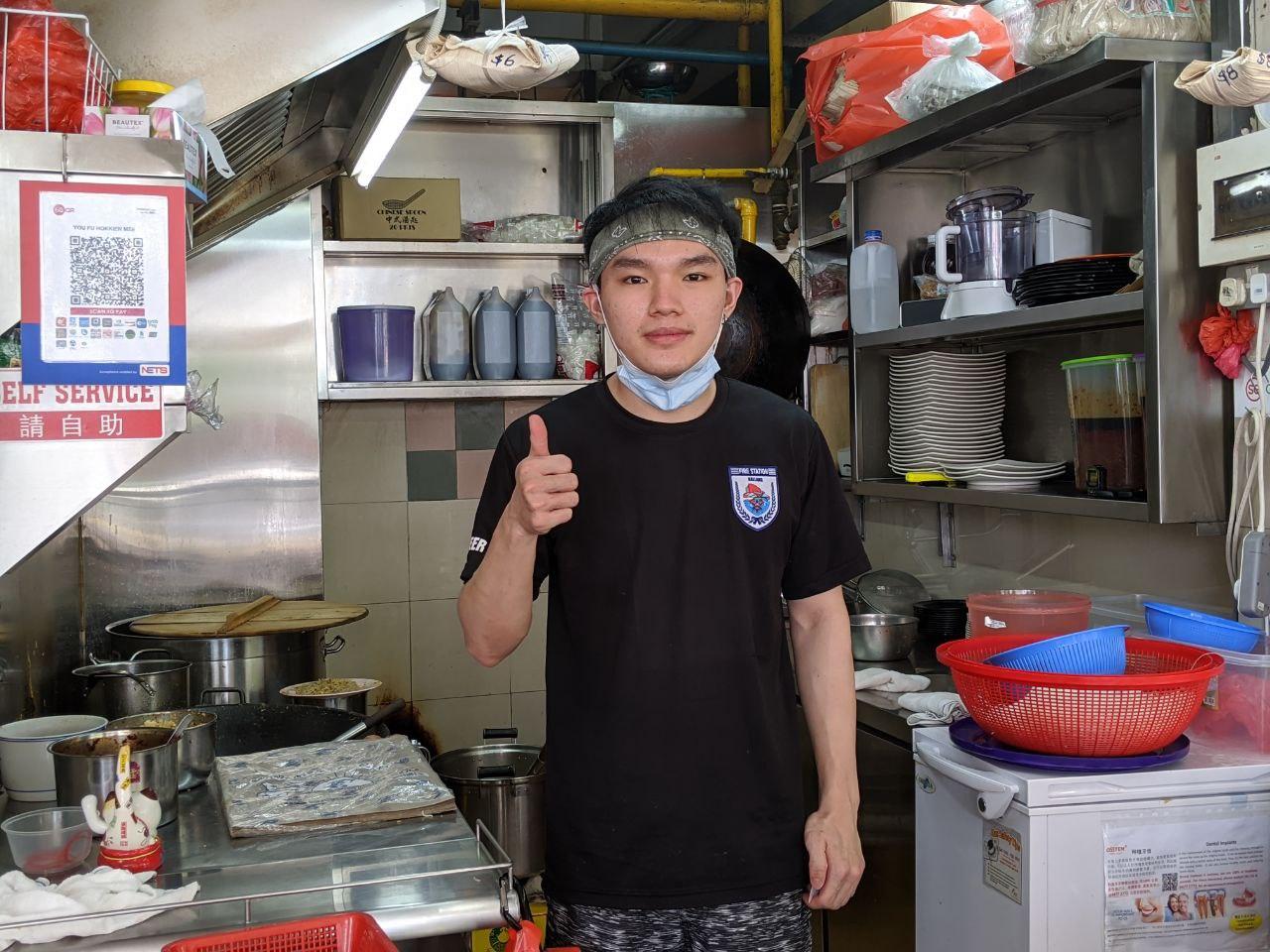 So what’s next for you? Do you intend to continue studying in the future or what are your business plans?

No, I wanna cook! If it’s what you like to do, you’ll never stop doing it.

I wanna open other chains in the future. I’ve not decided yet but there’s plans. Definitely, long-term for sure. Even if I branch out next time, I will still do hawker food. But maybe with a twist, it’s a surprise lah!

Some people say the younger generation cannot take hardship. What would you say to these people?

It’s a lot of hard work. A lot of people don’t know one lah… but just have to stay humble.

If you work hard, you can get what you want. I believe in hard work and smart work!