One Singaporean industrial designer has come up with an idea to improve the design of recycling bins.

Tommy Cheong, who recently graduated with a degree in Industrial Design from the National University of Singapore (NUS), has designed an alternative recycling bin called the "Recycle Right bin": 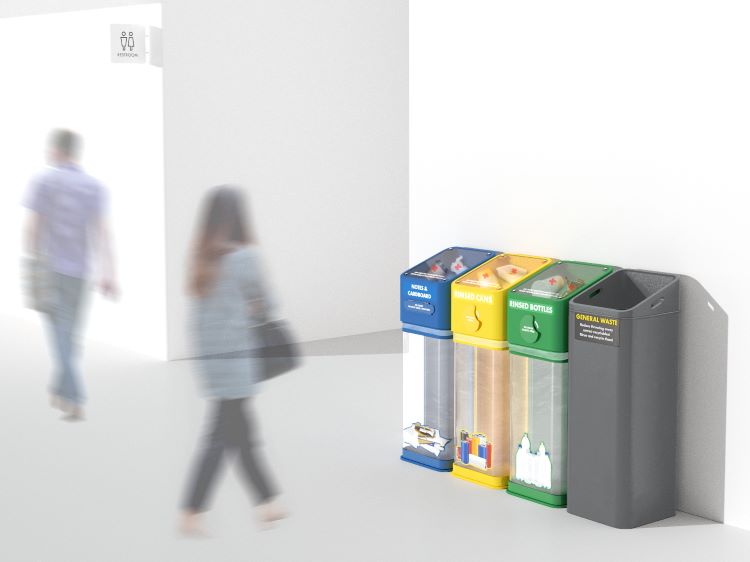 One issue that Cheong aims to address is the low recycling rate of plastics, which was at 4 per cent in 2019, according to statistics from the National Environment Agency (NEA).

Cheong said that contamination is a prevalent problem as users are ‘mindlessly’ throwing all sorts of waste into the bins.

Before coming up with this new design, he surveyed students on campus and was told about the following issues:

“No, never thought of it (rinsing) and the places to rinse recyclables are located further away from the recycling bins.”

“I hesitated a couple of times (recycling the contaminanted recyclable) before I decided to go and rinse it.. Usually I don’t even see any bins around”

He found that what's stopping people from recycling correctly includes misconceptions about what can and cannot be recycled and the perceived inconvenience to rinse or empty recyclables before throwing them into the recycling bin.

His proposed design to solve these pain points is to have a display with real-life examples of what cannot be put into the recycling bin such as food packagings.

This display is a key part of the design of the new recycling bin as real-life 3D items were found to be more effective than 2D icons in educating users on what can and cannot be thrown into a bin.

To reduce 'mindless' disposal or contamination, Cheong also deliberately added a lid to cover the mouth of the bin.

Users will have to slide the cut-out before throwing the recyclables such as metal and plastic bottles.

In addition, the main part of the bin will be transparent to highlight the quality of recyclables that should be in the recycling bin:

According to Cheong, the recycling bins, which were funded by South West CDC, will undergo a trial on the campus of NUS before exploring potential collaborations to deploy more of the bins at public spaces, such as shopping malls, community centres and schools.

The NUS Recycling Taskforce and Cheong are also exploring a potential collaboration with NEA.

The designer who has always enjoyed creating things from a young age ventured into industrial design in Nanyang Polytechnic (NYP) after his 'O' levels.

Tommy told Mothership that the course in NYP sparked his interest and passion for curating innovative solutions that would potentially help solve everyday challenges.

"It was only right to continue to do what I love and potentially pursue it as a career as well."

Other than his idea of creating a better recycling bin, he has created an innovative and reusable bubble tea cup.

Another one of his designs, CHEW, is a reusable straw, which is a straw that can be disassembled and stored in a compact form.

Cheong told Mothership that the reusable straw project was launched on Kickstarter in 2018, and raised USD$20,000 in its first week.

Beyond the recycling bin project, the fresh graduate is currently working at the NUS Center of Additive Manufacturing as a Research Apprentice under the NUS Resilience and Growth Traineeship Programme, which is in accordance with the SGUnited Traineeships initiative.

As shared about my Zerowaste aspirations as an industrial designer, I intend to further the Recycle Right project and also seek other opportunities to innovate for more sustainable product design solutions in building a circular economy for our global community.