An Instagram account featuring thousands of photos of expecting women taken all over Singapore and overseas -- likely without their consent -- is making the rounds online.

The alarm raised has been palpable, as the account @roseline0621 has been shared to mummy Facebook groups over the past few days, with women realising they have been or are at danger of being creeped upon without their knowledge.

Account has posted more than 5,600 photos of pregnant women

The account has amassed more than 5,000 followers and accumulated 5,691 posts at the time of writing, as it has been posting photos of pregnant women with a regularity that can be described as obsessive. 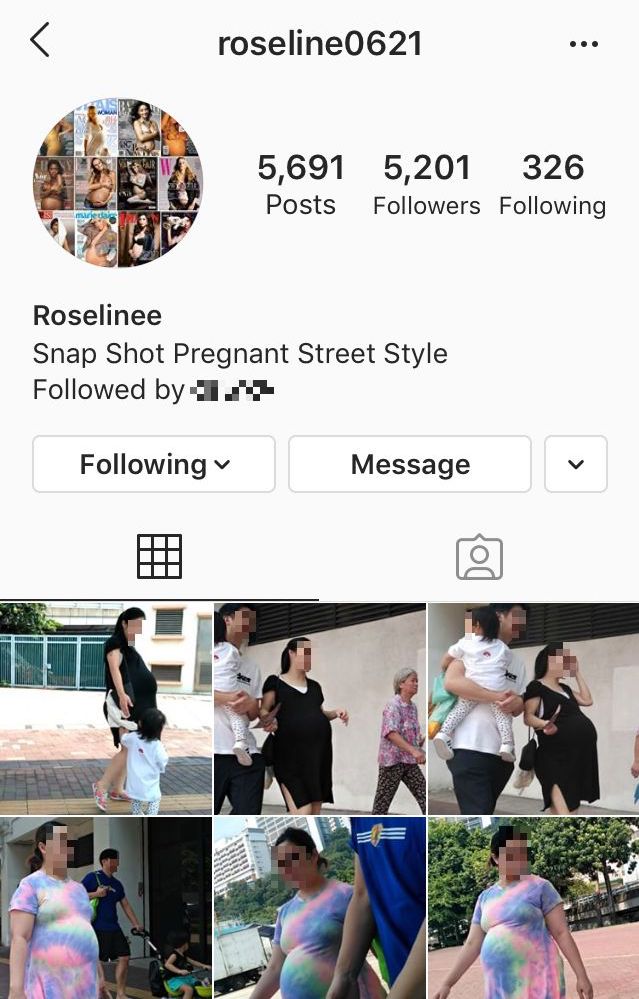 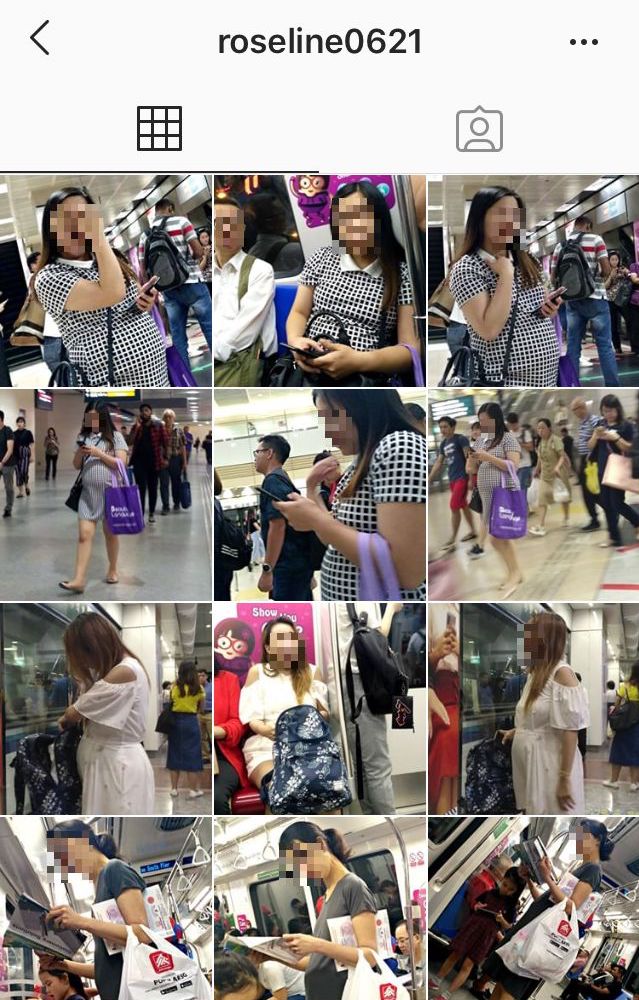 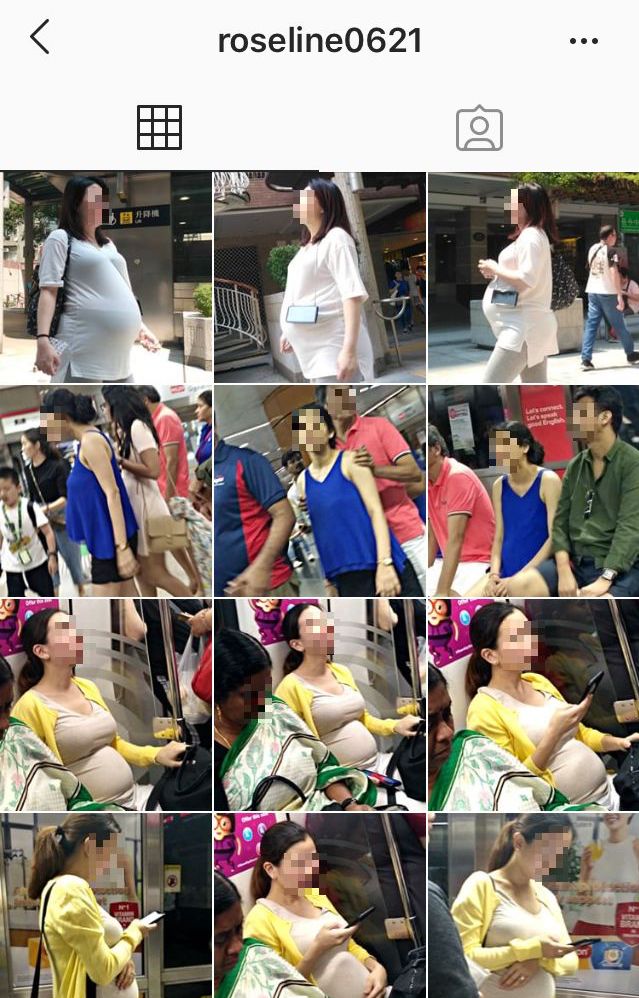 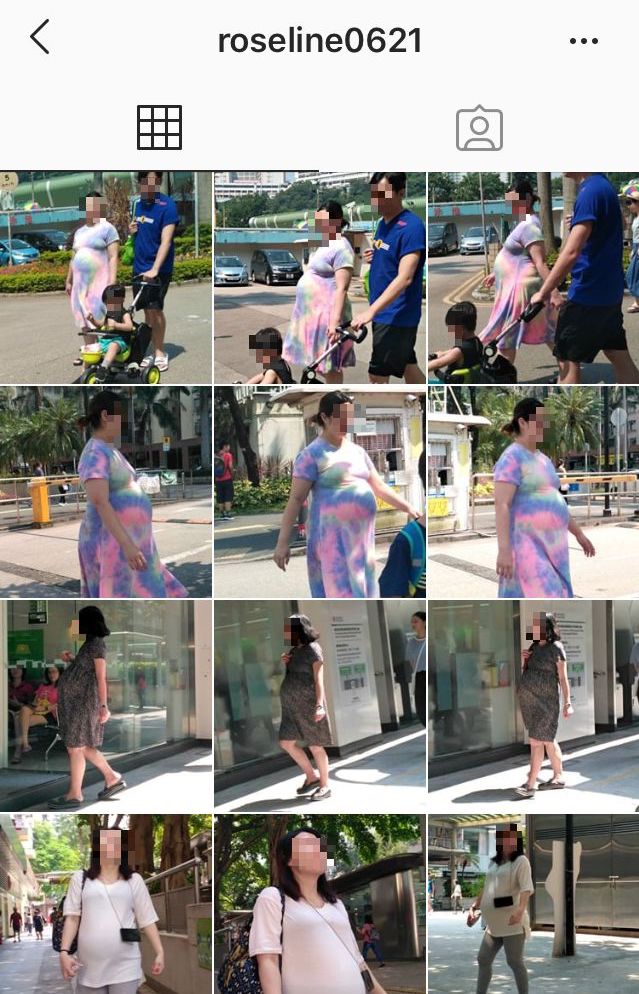 The photos on the account are uncensored and show the faces of the women photographed.

Between Aug. 21 and 28, the account posted 73 photos of different pregnant women -- an average of abut nine posts per day.

The earliest posts go back almost three years ago.

Taken in all areas accessed by public

The photographs were taken in a variety of public locations, including at car parks, MRT stations, on trains, hawker centres, and shopping malls.

The women featured in the photos appear clueless that they were being photographed, and there are no obvious signs that they had given their consent to have their photos taken and published on a public platform.

The captions accompanying the photos include only a string of numbers, which could possibly reflect when the photos were taken, and many, many hashtags. 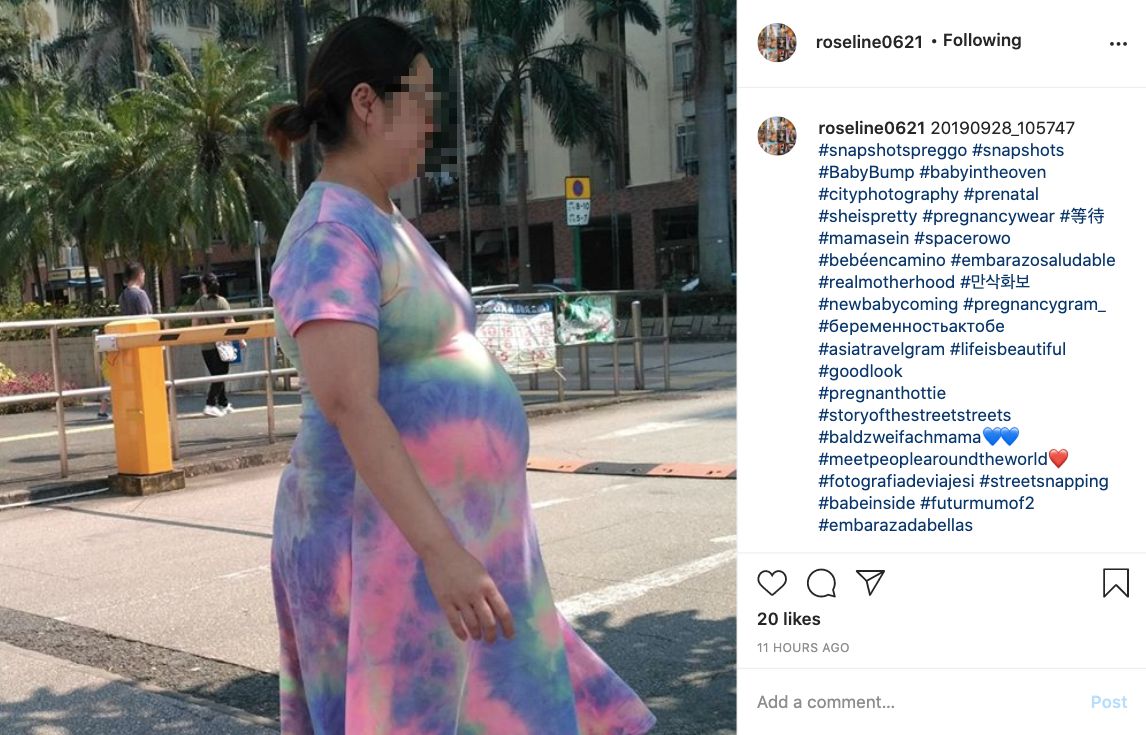 Some of the hashtags reference pregnancy and motherhood — such as #BabyBump, #newbabycoming, and #pregnanthottie — and even include some hashtags in foreign languages, such as Russian and Spanish.

A bit more digging online revealed that a Tumblr page by the same username and a similar tagline ("snap shoots pregnant asian preggo") also posts photographs of pregnant women taken in countries other than Singapore.

The most recent Tumblr posts on Aug. 17 are tagged as being taken in Guangzhou.

Some of the photos posted on the Instagram page in 2018 also appear to have been taken overseas, such as in Malaysia.

The Instagram page has since received backlash for its posts.

A number of readers also wrote in to Mothership about their concerns regarding this account.

Some individuals have left critical comments on the posts, although some of the comments are no longer available, and appear to have been removed. 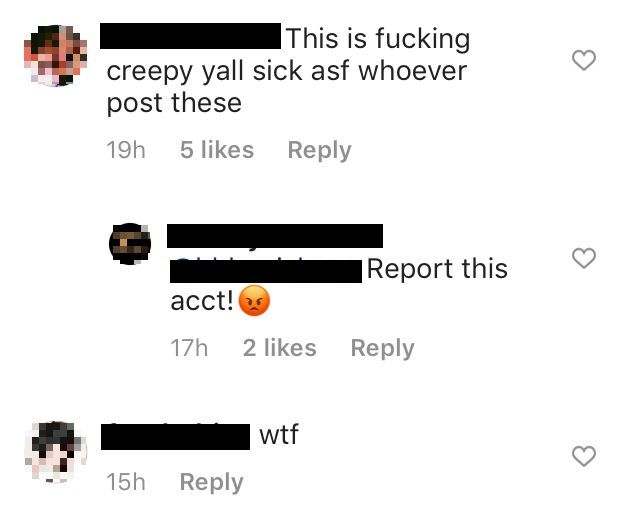 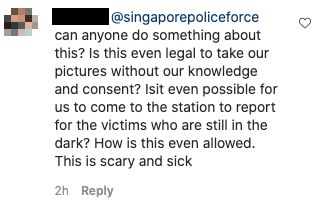 Mothership has reached out via Instagram direct message to the page to ask about the intention behind the account and how it is run: 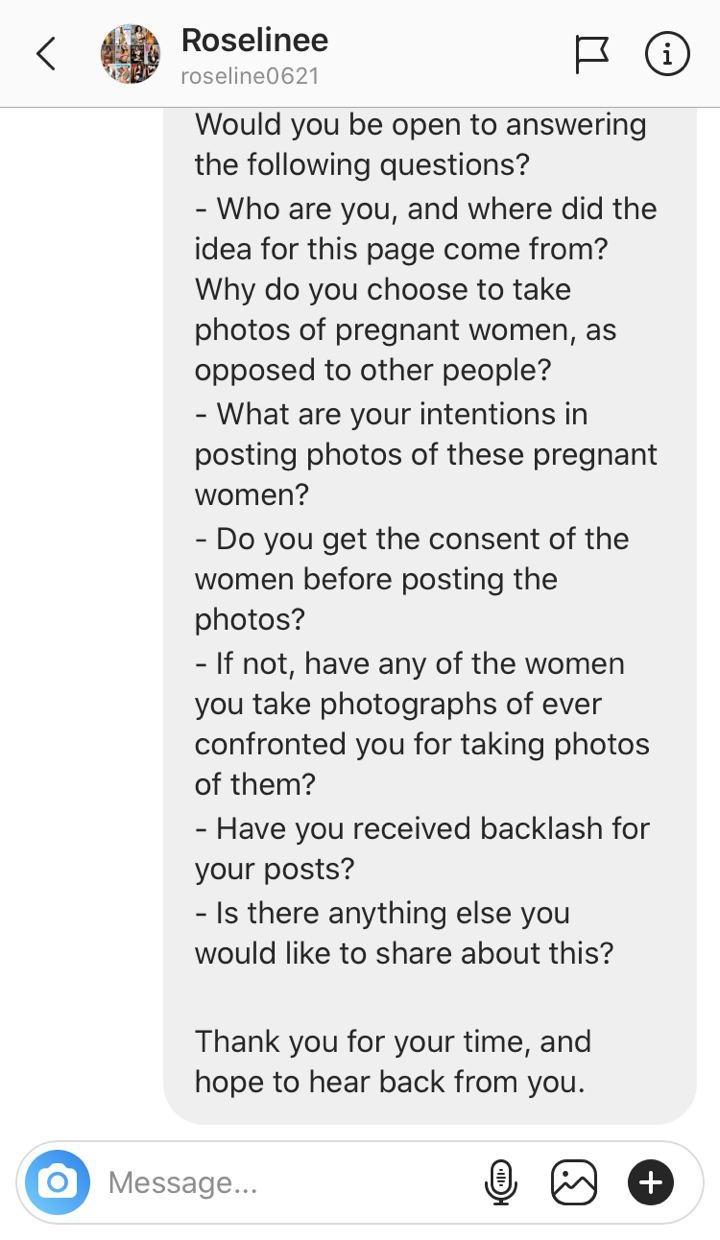 The page did not respond to our queries, and instead blocked us. 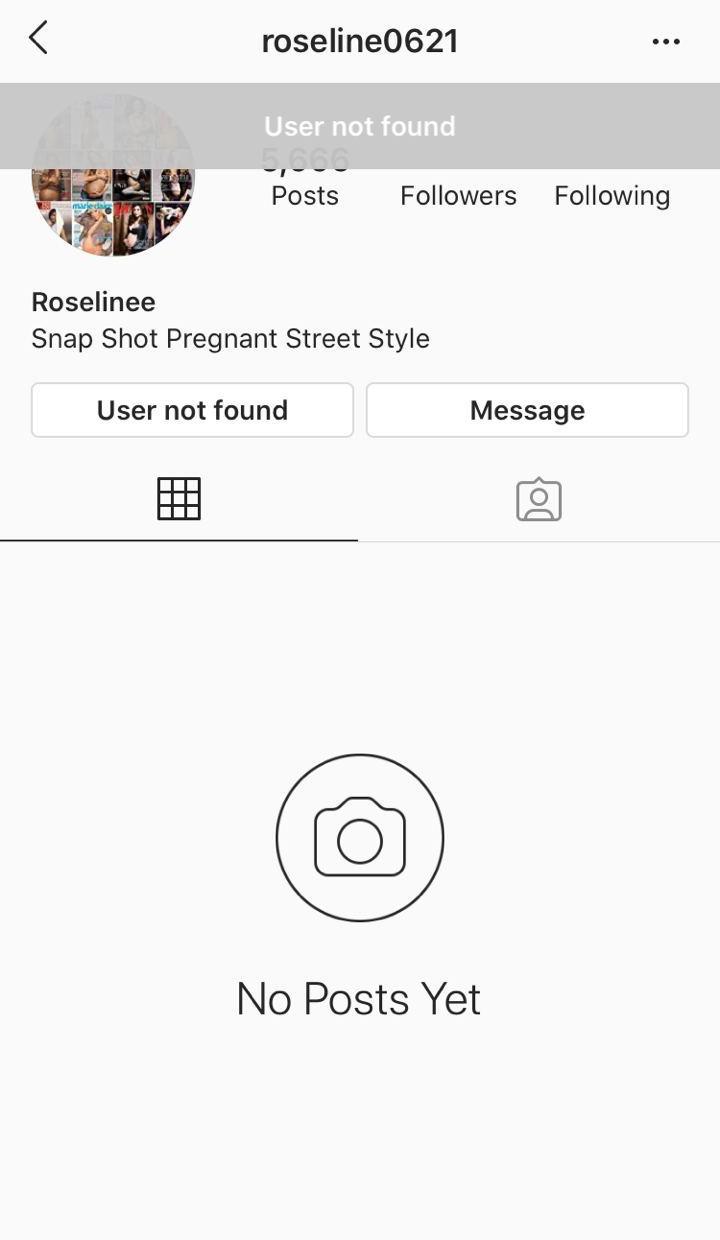 One victim has filed a police report

Mothership spoke to one 29-year-old woman whose photograph was taken without her consent and posted on the Instagram account.

Jasmine (not her real name), who sells skincare products on Facebook Live, shared that one of her customers recognised her in one of the photos posted by the Instagram page and sent it to her.

"I [was] actually very shocked at the moment, lah."

What was particularly surprising to her, was that the photograph, which was only posted earlier this month, wasn't taken recently, as her child who she was pregnant with at the time is already one year old.

She also shared: "I didn’t expect this to be happening in Singapore to be honest."

Asked how she is feeling now that she has encountered this photograph of herself posted online without consent, Jasmine stated bluntly: "I don't feel upset. I just feel it's very weird that someone take picture of me without my permission, that's all I feel."

She said that perhaps she doesn't feel so affected by the incident because of the nature of her work, and being seen by many people on social media.

Jasmine added: "For me, for people to look at me outside, I don't feel weird, because this is what I do for a living."

Jasmine stated that her husband has filed a police report about the incident, and that she hopes that the person behind the photos will take down the photos of all of the women soon.

Responding to Mothership's queries, the Singapore Police Force confirmed that police reports have been lodged.

At this juncture, it isn't possible to say for certain, but some eagle-eyed netizens have spotted a familiar figure in a number of the photos. 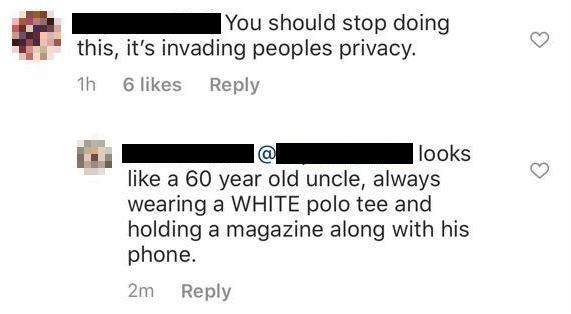 The individual taking the photos appears to be a man, as he can be seen in the reflection of some of the photos. 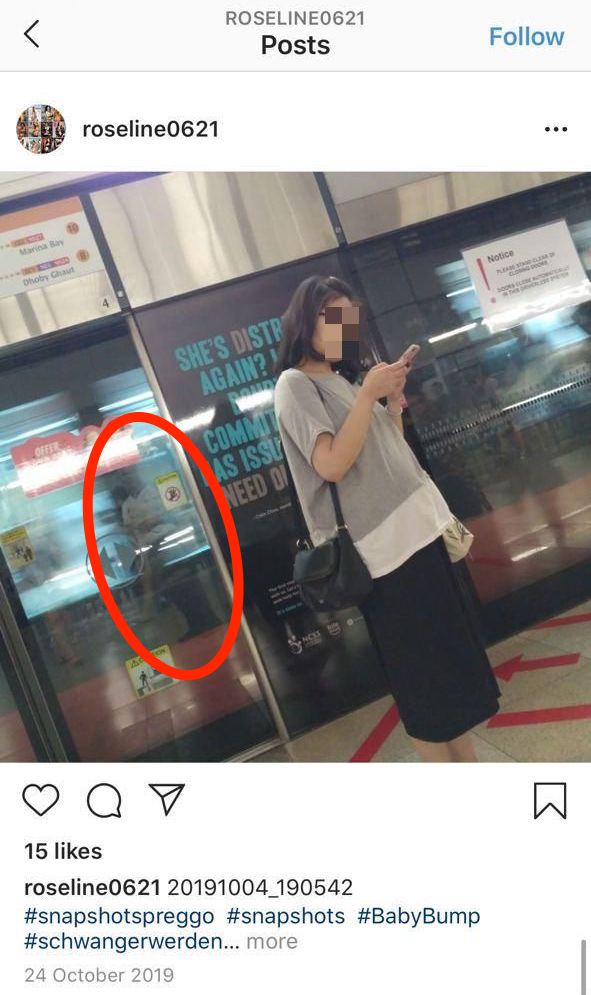 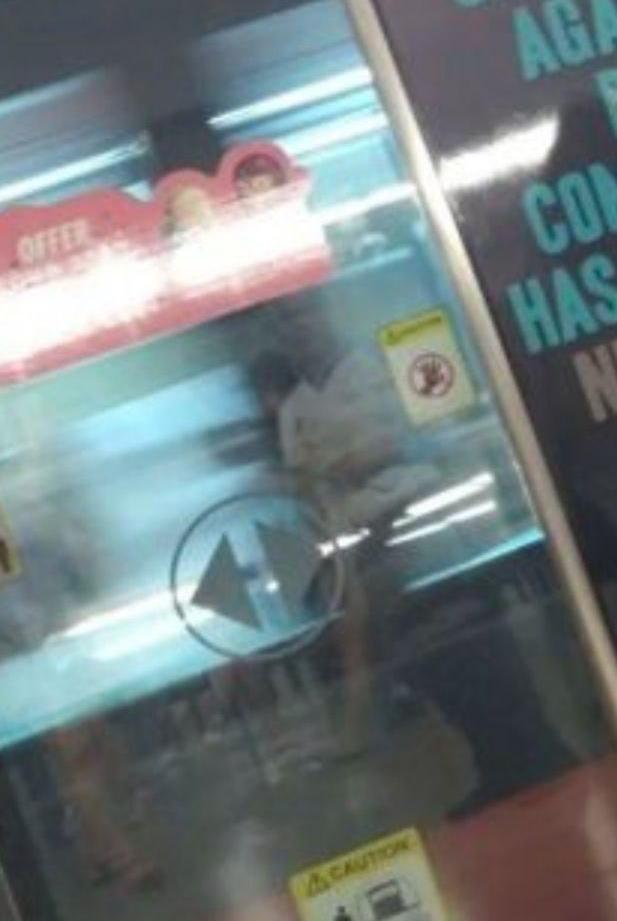 He can be spotted holding a newspaper or magazine and his phone in one hand, pointed in the direction of the woman being photographed. 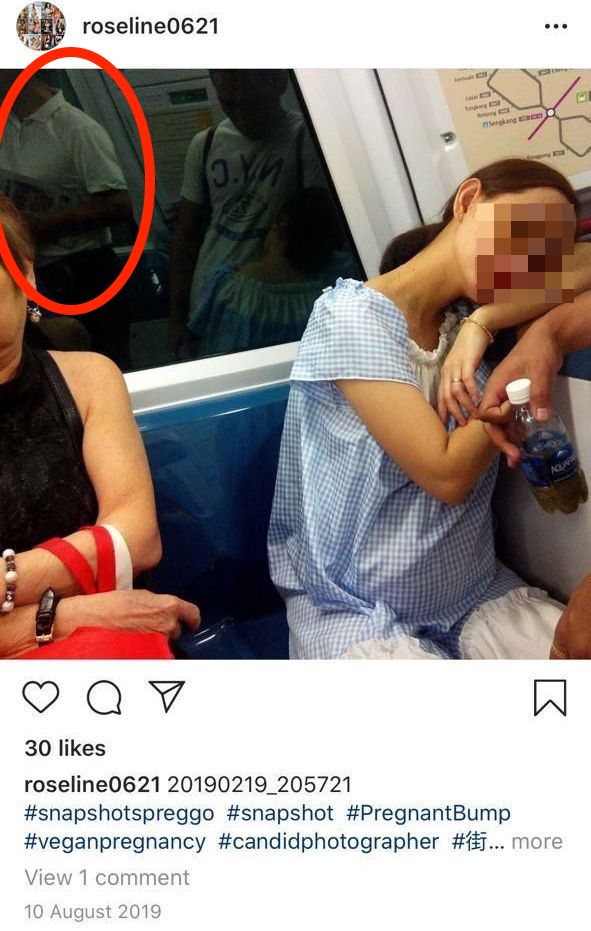 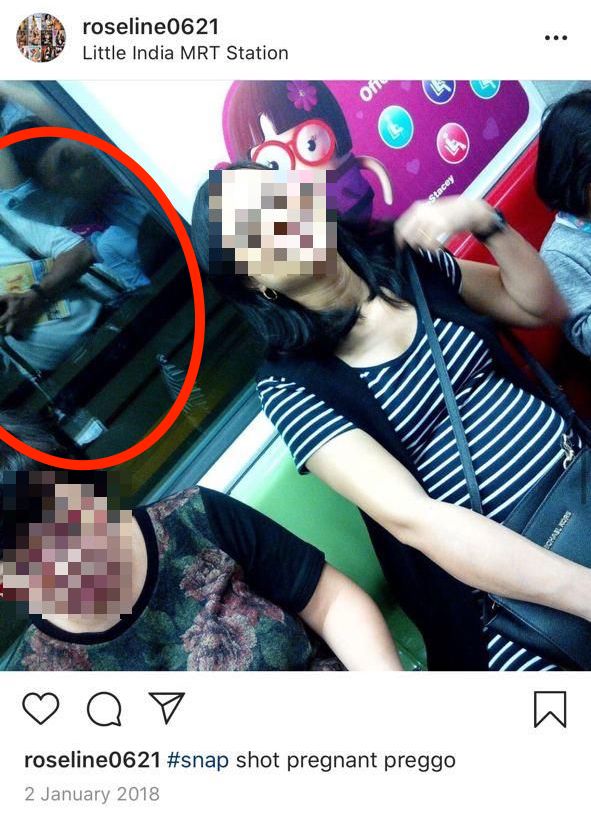 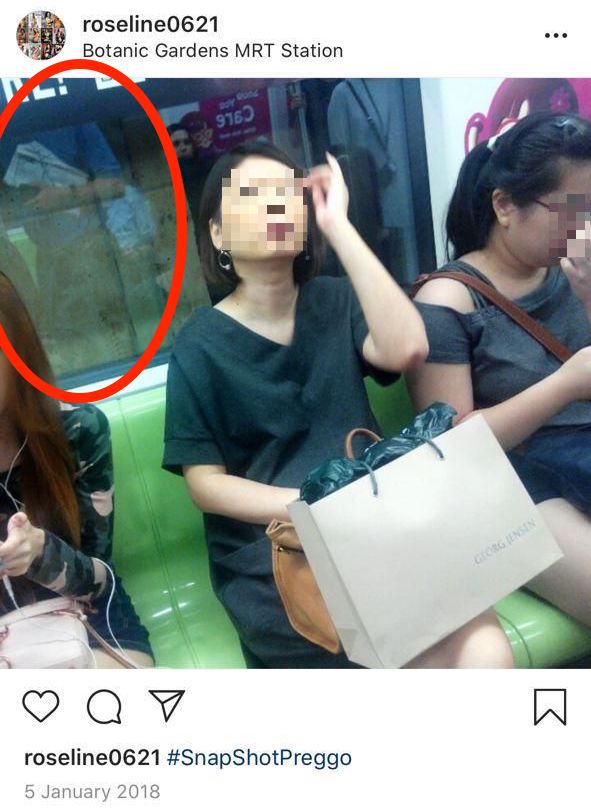 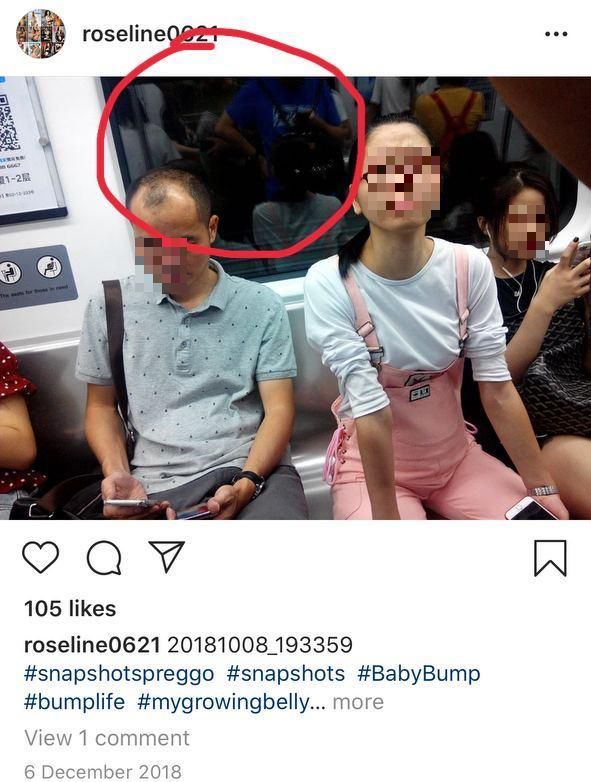 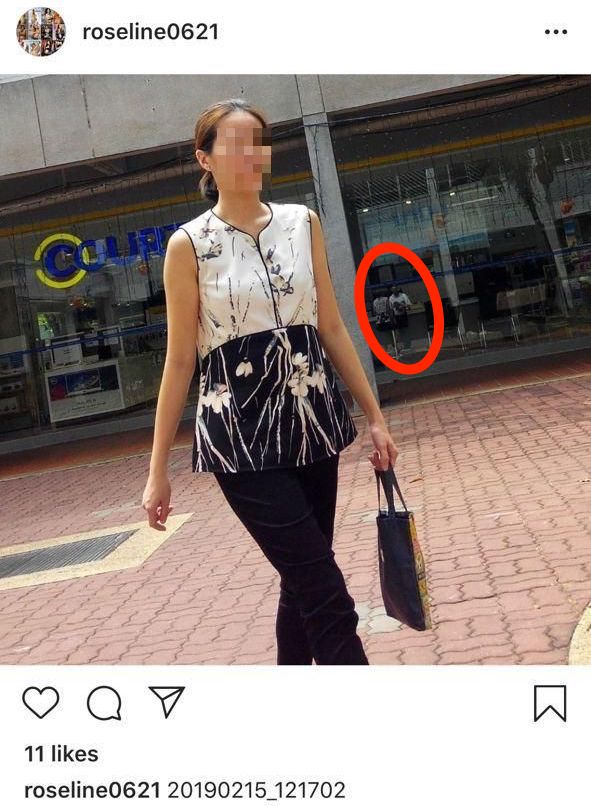 The Instagram account's bio reads "Snap Shot Pregnant Street Style", and two hashtags used in some of its posts are #streetphotography and #streetshots.

Edwin Koo, a professional photographer who specialises in documentary photography, shared his thoughts on the matter with  Mothership.

He said: "Photography should be a respectful process even when it is impossible to acquire a written permission from the subjects, such as in street photography."

"When you observe body language and angles in these images, there seems to be a voyeuristic or surreptitious bent, and it’s obvious in some images that subjects were uncomfortable."

Khoo added that photography is not meant to just about "point-and-shoot-and-post", and stressed the importance of curation.

He said: "There’s an entire thought process behind well-conceived photography and storytelling. In the hands of an untrained amateur the process can be truncated, short circuited, and then turned into a Frankenstein of a photography project."