Yes, you read that right. This is a story about a watermelon Game Boy — a fruit that actually plays Pokémon Emerald.

This fantastic contraption comes from the mind of 24-year-old Cedrick Tan, who is currently reading a Double Major in Business Analytics and Marketing at the SMU School of Information Systems. 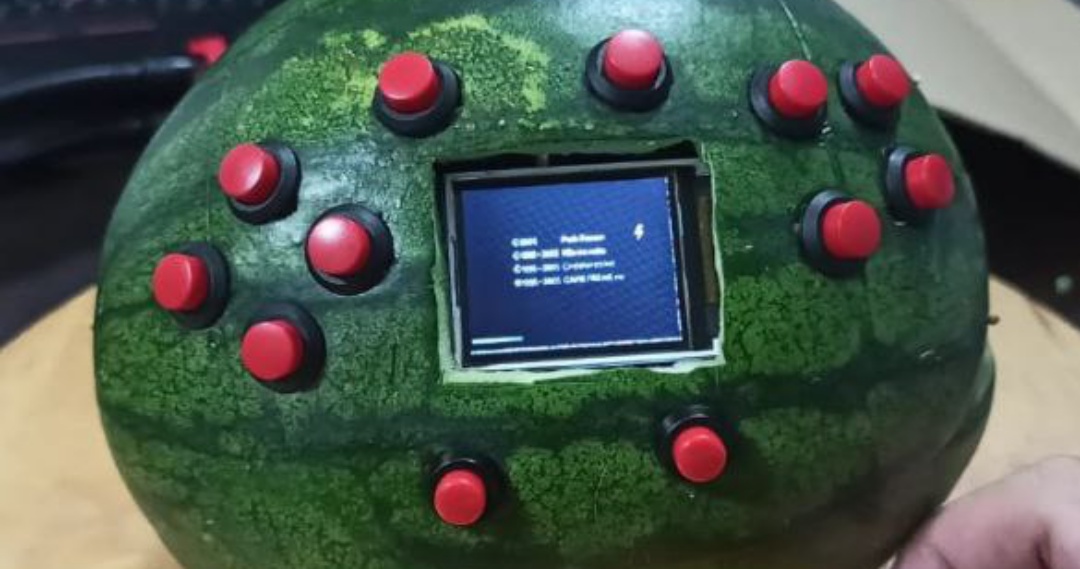 To be clear, the watermelon Game Boy consists of the parts of an emulator encased in a hollowed out watermelon.

"It started out as a joke that I told my friends and family," Tan said to Mothership.

"As the project progressed I envisioned how funny it would be to see someone playing with a watermelon out in public.

The humour of that thought alone convinced me to turn this thought into a reality. I'm glad that the community had a great laugh out of this project 😂."

Tan details the process of creating a watermelon Game Boy in a YouTube video on his channel:

Of course it's never as simple as hollowing out a watermelon.

Being an Information System student, Tan has the knowledge to complete the programming aspects of the project.

Here are the steps which Tan kindly walked us through, for those who are interested:

1. I bought a watermelon. Emptied the insides. Made holes for buttons and screens.

2. Then I re-wired the console through each holes to achieve the result seen.

3. For the console, I first flashed the Retropie image onto an SD card and ran it on my RaspberryPi 3b+.

4. Then I had to enable SSH for wireless configuration via PuTTY application.

5. Physically I wired up the TFT 1.8 inch screen to relevant GPIO output pins, similarly for the buttons as well as speakers. Each component was configured separately.

6. From PuTTY I went into the RaspberryPi's command line and installed 2 libraries. One for the LCD screen and another for the button configuration.

7. Setting up the LCD screen, I simply had to identify which model the screen was and ran the appropriate driver. The colours came out weird so I had to configure certain settings and it worked like a charm.

8. For the buttons after the correct library was installed, I was able to activate the specific GPIO pins I chose and enabled input from them.

9. The sound was straight forward, I added a line of code to the config.txt file and it sent audio signals to the GPIO pins that I wired up.

10. When all these were done, I rebooted the device and simply mapped the buttons to mirror that of a Game Boy. That's how it was done!

Here's a quick montage from his video:

Tan recommended using the Retropie software which allows the RaspberryPi single board computer to be transformed into a retro-gaming device running various forms of emulators.

"I was determined, however, to learn it and enjoyed the process thoroughly. Personally I strive to learn at least two new skills a year, I guess you could count this as one of them!"

The entire process from conception to final product took Tan one month to complete. However he clarified that the relatively lengthy time was the result of a faulty Raspberry Pi which took two weeks to troubleshoot and have replaced with a new one.

Tan chose Pokémon Emerald to test out his creation because Pokémon is his favourite Game Boy game and the project certainly brought back a hit of nostalgia.

"Waiting for the Pokémon time slots on Kids Central back in the day, being imaginary Pokémon trainers with friends from primary school. Pokémon was something that tied everyone together; a common topic among all my friends and we enjoyed every single bit of it."

His next project would probably be a Durian Boy, as recommended by many others, who even preemptively provided viable name for the prickly creation (PokeBall, SmellyBoy, No Pain No Game, etc). To that, Tan would only say:

"I look forward to the challenge, HAHAHA!"

For more of Tan's exploits, you can head over to his YouTube channel here.