[UPDATE at 4:40pm on Aug. 20: This article has been updated to include SBS Transit's statement on the matter]

[UPDATE on 6:05pm on Aug. 20: Police confirmed that they were alerted to a case of intentional harassment against a public service worker and public nuisance along Nicoll Highway on August 19 at 6.00pm, and that investigations are ongoing.]

An SBS Transit bus service was interrupted on August 19.

Its driver refused to continue the service, as a man allegedly forced his way onto the bus after being denied entry because he was wearing a neck gaiter, rather than a face mask.

The man then started a Facebook live video to document their exchange.

He interpreted the driver's actions as being racially motivated, and repeatedly called attention to the fact that the driver did not speak English.

"This is the problem when you have China people working in Singapore", he said.

Meanwhile, the driver can be heard contacting the Operations Control Centre (OCC) in the video, and says to the OCC staff that "he opened the door by himself", and that "he boarded the bus by himself", adding that "he's not wearing a mask".

The driver explains to OCC staff in Chinese that the man is wearing a "面巾", or, "face towel", instead of a mask, that he is recording the incident, and that he is "speaking a little louder".

At one point, the driver also mentions that the man was Indian. However, this could have been in reference to his communication difficulties, as he was also asking for OCC staff to speak to the man directly.

The man also called attention to the fact that the driver's mask has slipped down, exposing his nose, and says "you're going to go down, motherfu****".

In the course of the 15-minute video, the man also used other abusive terms such as "a**hole" and "b*stard".

With the bus remaining at the bus stop, a passenger on the bus made his way to the front of the bus to see what was causing the holdup, saying that he was in a hurry.

He suggested to the driver that there is no issue with the man's choice of face covering, though the driver did not accept his explanation.

The passenger then tries to offer the man a mask, but is rejected by the man who says that "we are not giving in to these a**holes".

"This is going to go to Facebook live. It's going live right now," he says, later adding that as many as five of his more than 1,000 Facebook friends are watching it live.

"This is called Singapore government. Cannot hire Singaporeans, hire this kind of China man. Then after that make life difficult for every one of us."

Passengers get off the bus as OCC staff try to mediate

As the other passengers get off the bus, realising that the situation is not about to be resolved, the driver apologises to them and explains that the police have been called.

"Those who ride buses have to wear masks", says the driver in reply to passengers asking if the bus had broken down.

The bus driver ends up calling OCC staff on his mobile phone, and the man speaks to them for a short while, in English. Police then arrive on scene and interview the man and the bus driver separately, with the live video ending shortly after.

According to later comments on his posts, the man says that the police accepted his mask in the end: 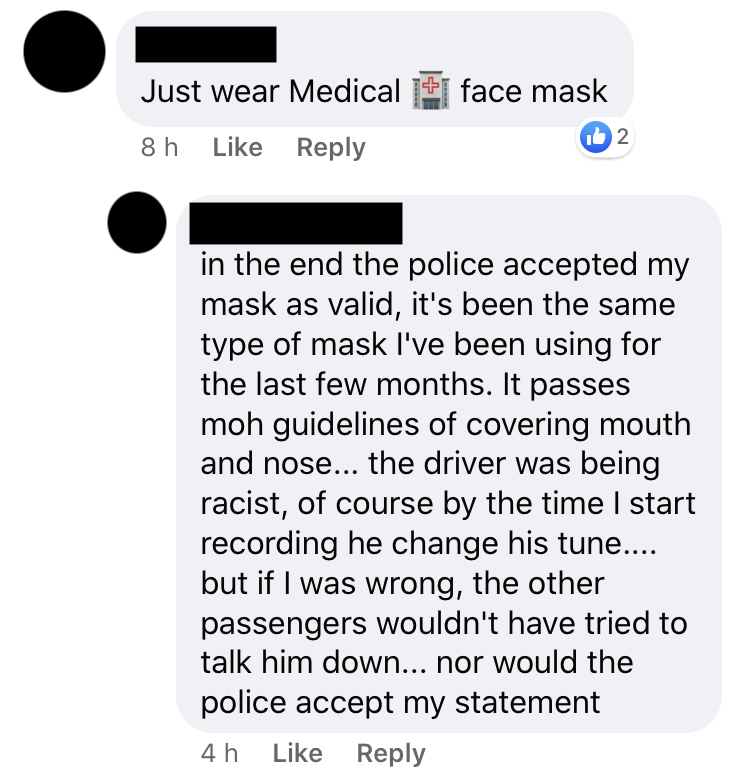 Man had been questioned over mask choice before

This does not seem to be the only occasion where the man faced questions regarding his choice of mask, however, as he lets on in the video that:

"As a Singaporean, I face this every day. People who don't understand English, telling me to wear a mask, when I am wearing a mask."

Was the man wearing a proper mask?

Netizens were divided on the question of whether the man was wearing a proper mask, with some suggesting that he should have worn government-provided masks instead, and others coming to his defence, given that his mouth and nose were duly covered.

The Covid-19 (Temporary Measures) (Control Order) Regulations 2020 defines a mask as such:

“mask” includes any paper or textile covering designed or made to be worn over the nose and mouth to provide the wearer protection against infections or air pollution, but excludes a face shield.

This would, presumably include the neck gaiter that the man was wearing.

One local shop offering a similar product suggests that it can be used as a "dust screen".

A study on different kinds of face coverings in the U.S., published on The Straits Times, claimed to have found that "bandanas and balaclavas don't do much at all" to prevent the spread of droplets.

However, others have pointed out that the research was never meant to offer conclusive evidence, as it was intended to highlight the methodology used in evaluating masks, and thus only studied one mask of each type. A co-author of the study also said to Science News that “the press coverage has careened out of control”.

Tan emphasised that the bus driver "was trying to do his job" and said that it takes "acts of harassment against our Bus Captains seriously", highlighting other instances where SBS Transit drivers were "harassed and even abused" by passengers.

Here is the full statement:

"Wearing a mask and using it correctly on public transport is mandatory as part of a national effort to prevent the spread of COVID-19. Our Bus Captains have a duty to ensure that all commuters don masks and wear them properly.

Unfortunately, there has been three incidents now where our Bus Captains have been harassed and even abused when they were carrying out their professional duties. One happened last week and two this week.

In yesterday's situation, our Bus Captain was unsure if the man's wrap qualified as a mask and sought clarification from our Operations Control Centre. He was trying to do his job but was unfortunately ridiculed by the commuter who not only filmed him but also made disparaging comments.

In another incident earlier this morning, a Bus Captain advised a commuter to put on his mask properly as it did not cover his nose. The man subsequently engaged in a conversation with another commuter and pulled down his mask further which exposed his mouth too. He was again advised to put on his mask but responded by scolding the Bus Captain. The man later alighted and re-boarded from the front and confronted the Bus Captain where he physically abused him by grabbing his shirt, resulting in some buttons becoming undone.

We take these acts of harassment against our Bus Captains seriously as they are frontline workers providing an essential service.

The Police is currently investigating both incidents and we are assisting by sharing the CCTV footage with them."

Police also confirmed that they were alerted to a case of intentional harassment against a public service worker and public nuisance along Nicoll Highway on August 19 at 6.00pm, and that investigations are ongoing.