The Sri Thendayuthapani Temple, located at Tank Road, has responded to a complaint that a devotee was treated unfairly, allegedly because of his caste.

In a statement to Mothership, the temple said the complaint was "inaccurate in many aspects".

They had come to this conclusion after reviewing CCTV footage and interviewing staff.

The issue was first brought to light by an open letter by a Facebook user with the first name Vekaneshivari, in response to what she saw as the ill-treatment of her father at the temple.

The letter had been sent by the author to the temple, and also published on her Facebook page on Jul. 20.

"This is my complain about how the temple staff have been treating non-Chettiars coming down to Sri Thendayuthapani temple," it read.

"We genuinely want to come and pray and not get involved in your caste system."

According to the Hindu Endowment Board, the Sri Thendayuthapani Temple is administered by the Chettiars' Temple Society.

The Chettiars, as described by Singapore Infopedia, are a subgroup of the Tamil community, and are historically associated with the moneylending profession.

Vekaneshivari's post alleged that her 68-year-old father, who is not a Chettiar, had been made to wait outside the temple for an hour while Chettiars were completing their prayers.

"He was asked to stand outside even when he complained that he was having leg pains and he asked if he could sit inside. Yet, your staff said sorry have to wait a while more (sic)," she wrote.

She also alleged that priority had been given to Chettiars in the past, citing her father's previous experiences.

"I understand this temple is owned and run by Chettiars... and you might want to have certain privileges for your people who belong to the same caste. But to think that you don't care about old people coming down to temple, making them wait just because Chettiars have to pray first... this is just not right (sic)."

The post has since been removed, but can be read here in full: 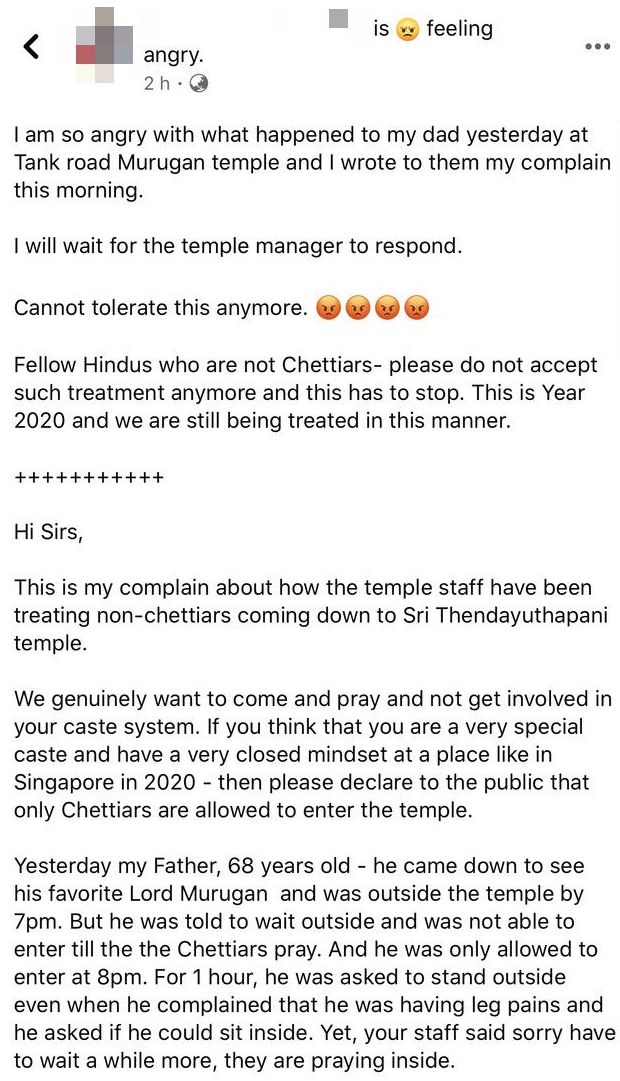 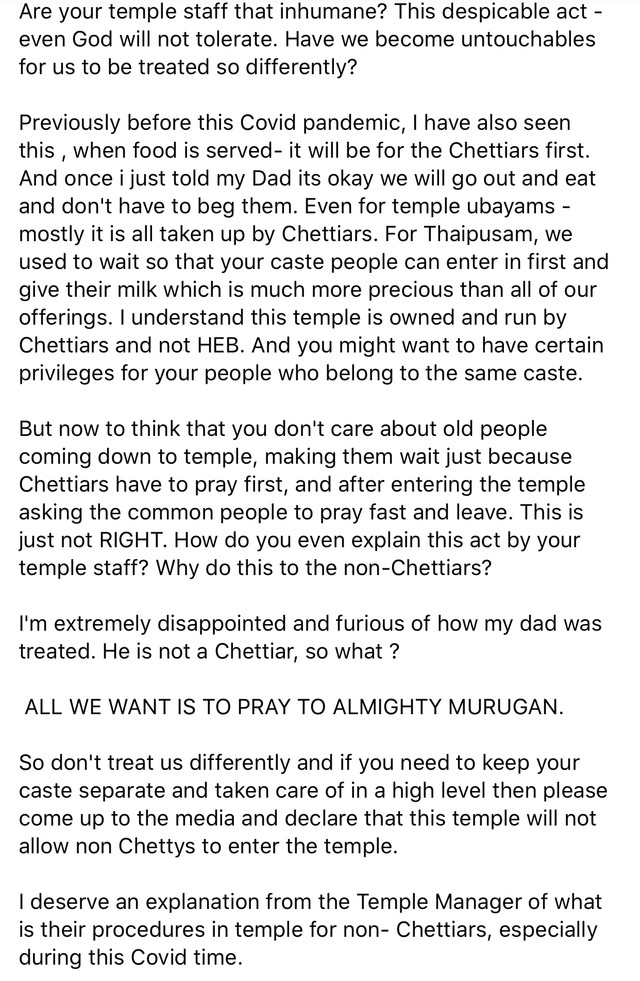 "Inaccurate in many aspects"

However, the Sri Thendayuthapani Temple has refuted the account of what happened, indicating that some of the facts did not line up with CCTV footage.

According to their statement, the woman's father arrived at the temple at 7:14pm at which time an annual pre-booked Ubayam (thanksgiving prayers) was in progress.

Due to Phase 2 safe distancing measures, only 50 people can be allowed in the temple's premises at a time and devotees are given entry on a rotational basis, the statement said.

10 minutes later, the temple informed those queueing to enter that they could proceed to offer their prayers, though Vekaneshivari's father decided to wait, as he wanted to have a priest perform a personalised prayer for him.

This was scheduled to commence at 7:45pm.

At 7:36pm, the temple said that Vekaneshivari's father was invited into the temple, and given a chair as the Ubayam prayers were still on-going.

He subsequently left the temple at 8:38pm after completing his own prayers.

The temple noted that he had waited for 22 minutes, and that he did not raise any complaints while at the temple.

"Besides the accusation about her father's experience at the temple on Sunday, [the Facebook user] has also made several unfounded allegations against the temple, which is unfortunate," the statement read.

The statement said that the management of the temple "look forward to meeting" the Facebook user on the evening of Jul. 22, "to further share with her our findings".