Researchers have tested shark fins from markets in China and Hong Kong and found high levels of toxic mercury in them.

The team, consisting of members from the United States and Hong Kong, published a study in May 2020 that reported that heavy metal concentrations in nine most commonly traded shark species to raise potential health risks.

Earlier this year, Hong Kong customs officials seized two shipments, which were found to contain a total of 26 tonnes of shark fin obtained from an estimated number of 38,500 endangered sharks.

Researchers sampled 267 shark fin trimmings found in the fin trade and measured the amount of toxic mercury in sharks' fins.

The team found that the samples had "staggeringly high amounts of mercury that are dangerous to human health", reported Florida International University (FIU).

According to one of the authors of the study, Garcia Barcia, the results were surprising:

“The mercury levels are super high and, on average, six to 10 times higher than what a safe level of mercury would be considered in Hong Kong.”

In addition to mercury, fins from one species of shark, the blue shark, was found to have levels of inorganic arsenic that exceeded the acceptable limit.

How does mercury affect the human body?

According to the World Health Organisation (WHO), mercury is an element that occurs naturally in air, water and soil.

However, exposure to mercury, whether it is long-term or short-term, can lead to damage to the brain and nervous system.

In foetuses, exposure to a type of highly toxic mercury, methylmercury, can occur due to the mother's consumption of fish and shellfish.

WHO reported that exposure to toxic mercury can negatively impact the unborn child's neurological development and impair the following:

In some populations that depend on subsistence farming in Brazil, Canada, China, Columbia and Greenland, WHO reported that children showed cognitive impairment, or mild mental retardation due to the direct consumption of fish containing mercury.

It can also lower the fertility in people who consume long-lived fish, such as tuna, mackerel and sharks, reported FIU.

According to FIU, the findings from the study will be used to educate members of the public through educational campaigns, and in turn bring down the demand for shark fins in Hong Kong and China.

FIU reported that around 100 million sharks are killed every year and are illegally caught and trade for their fins.

While most campaigns are focused on how endangered sharks are and their role in ocean ecosystems, this message has not appealed to the older generations in Hong Kong and China, who still consume shark fin.

According to Demian Chapman, who was co-author of the study, he told FIU:

“Not every human cares about eating an animal that’s endangered. But every human is worried about their health. That could be a very powerful driver of change in the future.”

How does mercury even get into larger fish, such as tuna and sharks?

When bigger fish or predators eat smaller animals that contain, certain compounds that are not excreted are bioaccumulated in the larger animals that are closer to the top or at the top of the marine food chain, as explained by Scientific American.

According to Scientific American, those looking to reduce exposure to toxic mercury are asked to avoid the consumption of predatory or long-lived fish, such as bluefin tuna, walleye, king mackerel and marlin.

Other fish that carry a large proportion of mercury include bluefish, shark, swordfish, wild sturgeon, opah and bigeye tuna.

The process of bioaccumulation is visualised by the figure below from an Ocean Watch report: 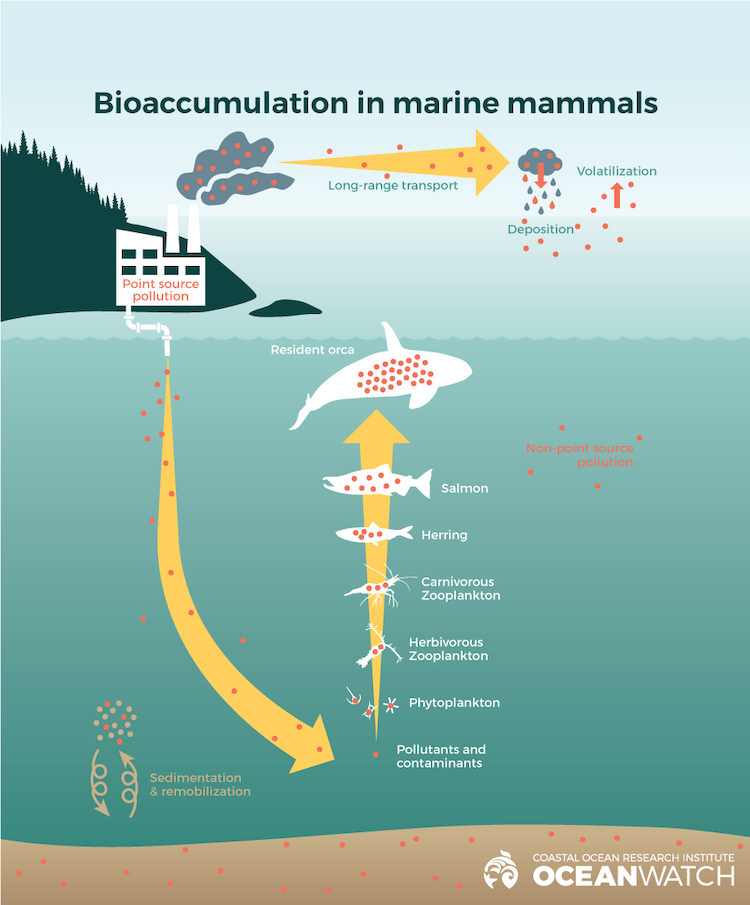