Prime Minister Lee Hsien Loong, who is the secretary-general of the People's Action Party (PAP), said during the launch of the PAP manifesto on Saturday (Jun 27) that 20 MPs will retire this year.

"In every election as we field new candidates, so we also have MPs who are retiring. This year, about 20 MPs are retiring."

However, quite a number of retiring MPs did not make their retirements public.

And some probably did not reveal their retirement plans due to strategic reasons on Nomination Day.

This resulted in a WhatsApp message being widely circulated online. 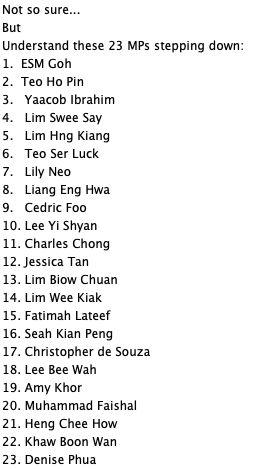 And we know it's wrong because these ten "retired candidates" listed in the WhatsApp message are contesting in this General Election:

Below are the 20 PAP MPs who retired this GE, after we know the full list of the PAP candidates for GE2020.