While Covid-19 and issues of unemployment might have dominated airwaves over the election and the weeks leading up to it, a YouGov survey found that Singapore voters had other considerations too.

And top of the list was the issue of the cost of living, which 26 per cent of respondents cited as one of five "top national issues or concerns."

Here are the full results from the survey. 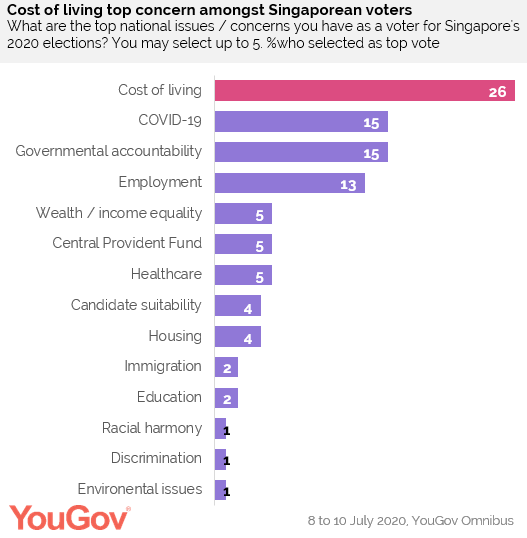 YouGov interviewed a representative sample of 1461 Singapore Citizens aged 21 years and over between July 3-8, 2020.

But according to the survey, there were differences in priorities between People's Action Party (PAP) and Opposition supporters.

According to YouGov, voters consider integrity (23 per cent) to be the most important quality in a political candidate.

Plurality of respondents expected PAP to win, but with smaller majority in Parliament

While many commentators differed in their expectations, the election outcome was not surprising to some Singaporeans surveyed.

“While some argued that the COVID-19 pandemic would cause a flight to certainty during this election, this polling demonstrates that many voters had broader concerns. This research provides valuable insights which help explain the voters’ choices at the ballot box.”

Images from Getty/jeijiang and YouGov