In an article on June 14, The Sunday Times revealed the results of a commissioned survey on people's perceptions of essential jobs within the context of a pandemic.

Results were collated from the responses of around 1,000 participants aged 16 and above, with a "nationally representative sampling across age, gender and income groups."

It was carried out by Milieu Insight, a Singapore-based consumer research firm.

The survey ranked the top five jobs Singaporeans believed to be the most essential, which were, in order:

On the other end of the spectrum though, artists were ranked as the number one most non-essential job — a belief that 71 per cent of respondents held.

It is uncertain how the survey defined "artist".

Artists have not been "just sitting around" during this period

This result though, appears to have rankled some in the community.

One R Chandran Rama, who is the founder and director of local theatre company ACT 3 Theatrics, took to Facebook to voice his disagreement.

Chandran believes that such occupations are essential, and wanted to make clear his stance for all artists, including musicians and dancers, "for our professionalism."

He said that despite the pandemic, he and other artists have not been wasting their time away.

Instead, they have had to adapt to the new normal by finding new ways of getting an income.

"In recent months, we have not been just sitting around and shaking legs. Many of us have had to invent different ways of reaching out."

Chandran said that with people cooped up at home during this period, many have realised the necessity of their services, with many artists offering these for free to boot.

Chandran stated that he has been approached by various organisations looking for productions to keep children occupied at home.

The survey, he added, did not need to publicly rank what is essential and non-essential.

If nothing else, we have feelings. We, too, hurt when pricked. Words of Shakespeare, an artist."

Chandran later clarified in a comment on his post that there was no need for others to put down anyone's occupation.

What about Netflix and Spotify?

Rishi argued that diverse forms of entertainment like Netflix, Spotify, television programmes, YouTube videos and even applications on one's iPad are all crucial in one's lifestyle now.

So are theatres and cinemas.

"And, when the theatres, restaurants, cinemas open up; please do not go to any of them.

Only go to a restaurant with no music, no paintings and focus on the food.

Go to a bar with no LIVE band or screens and just focus on drinking.

If we, as a nation, can successfully move forward without any of these things, then perhaps we can start taking this survey more seriously and believe that the sample is actually a “national representative” group.

But, If during the circuit breaker, you’ve gone out for a run with your wireless earbuds when you were stressed,

Or if you’ve watched that comedy before going to bed on a Monday cos it was the only thing that made you laugh all day,

Or, If you’ve left a cartoon on for the kids so that you can have 20 mins of peace while the weight of the whole world comes crashing down on you..

Then, an ARTIST HAS BEEN ESSENTIAL for you to get through this difficult time."

Rishi and Chandran's sentiments were echoed in several Facebook comments.

Users agreed that the definition of art was much broader than some might believe, and that the arts have been pivotal in maintaining the mental well-being of many during the circuit breaker period. 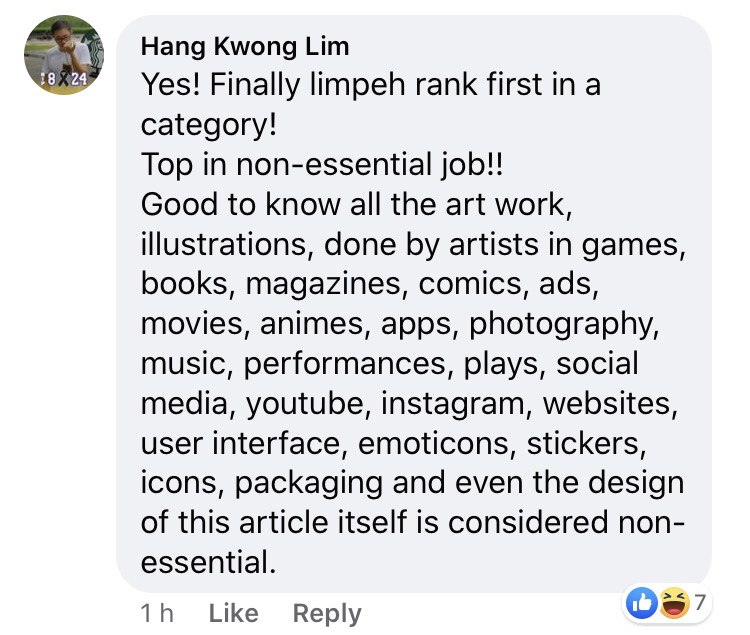 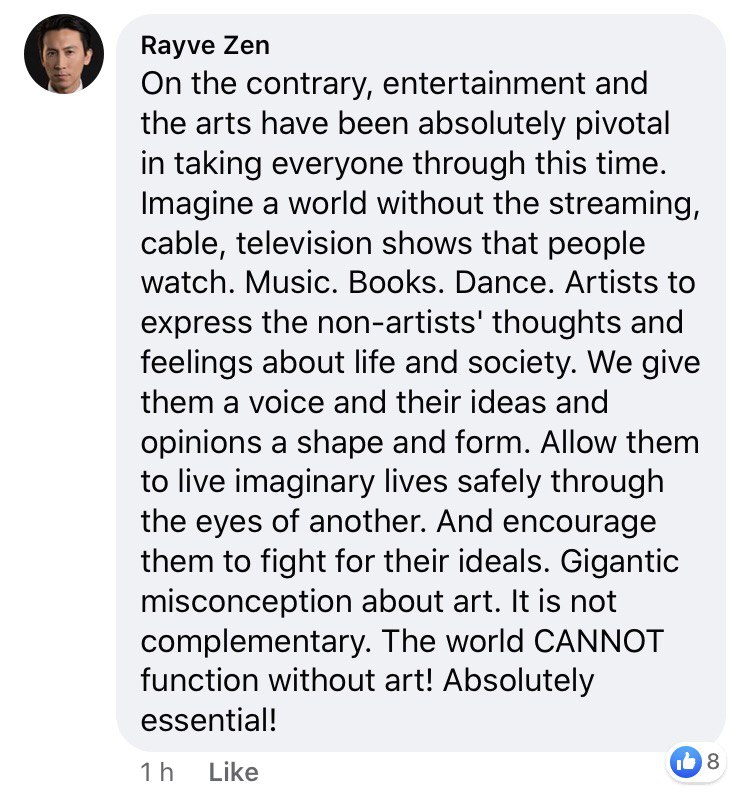 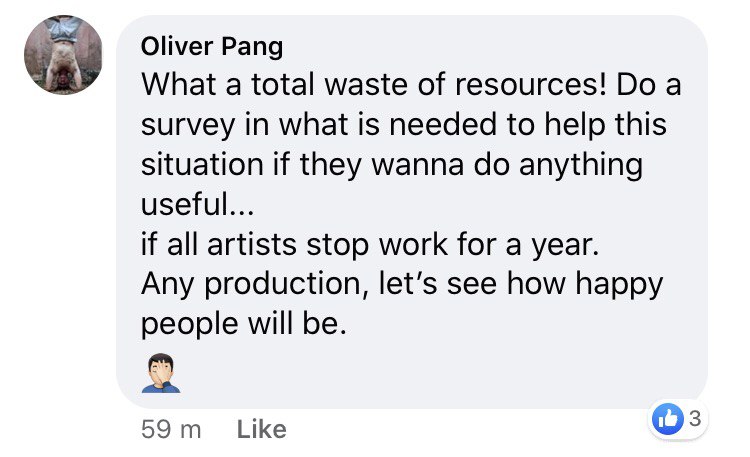 One user believes that jobs are only deemed essential when it eases Singaporeans lives and increases convenience, or when the jobs are high-ranking ones that rake in large incomes and have higher perceived social status. 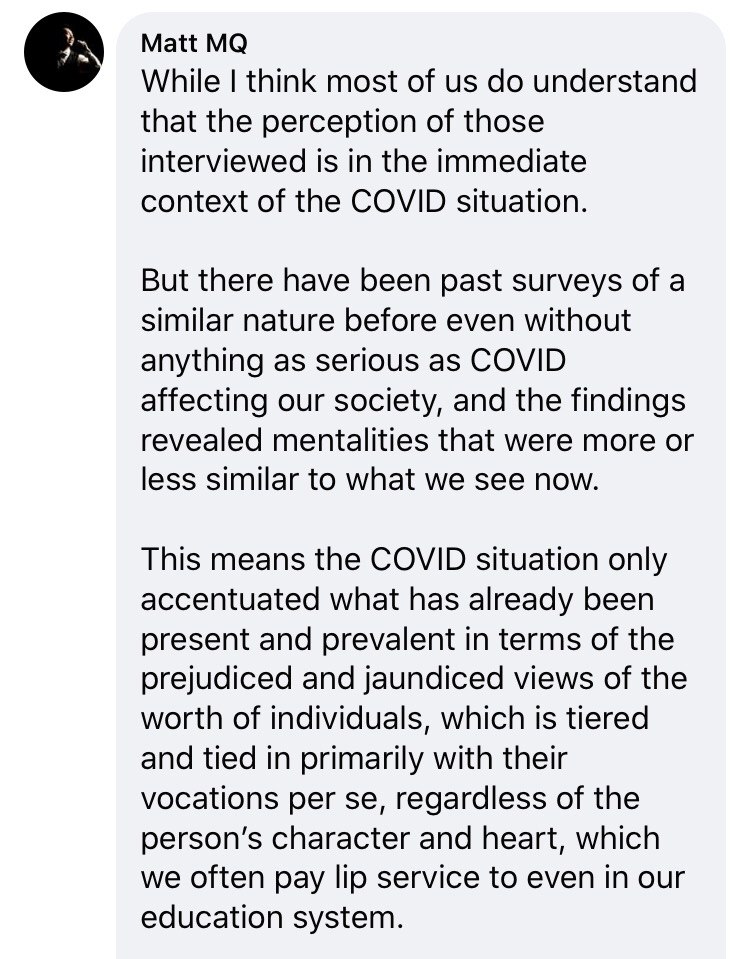 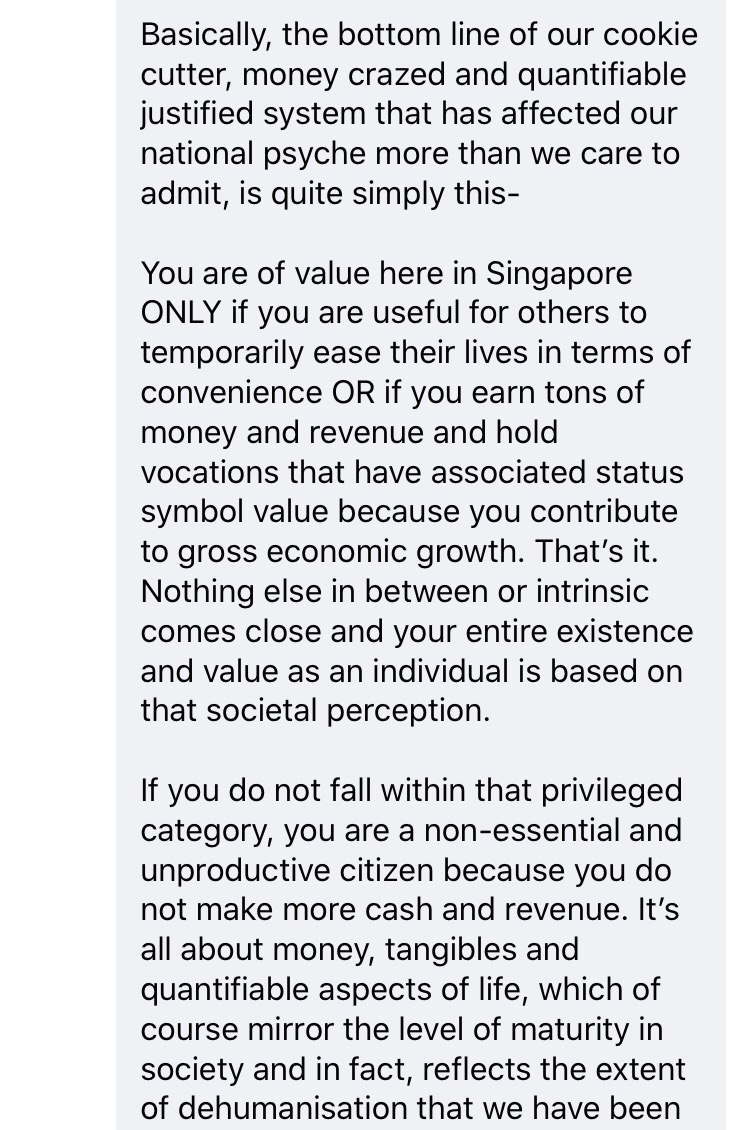 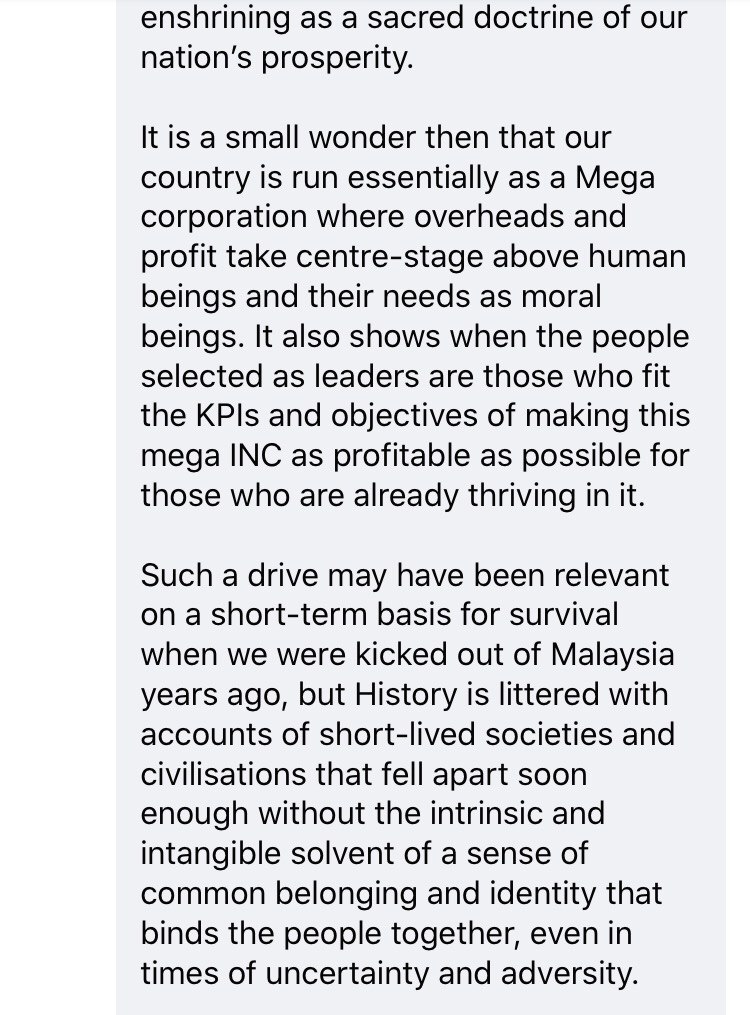 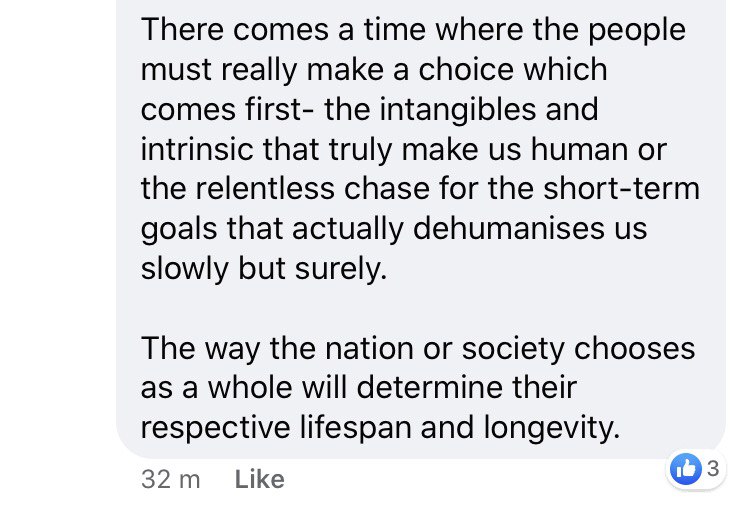 Some said survey was poorly defined

The Sunday Times article did not mention specific definitions for either. 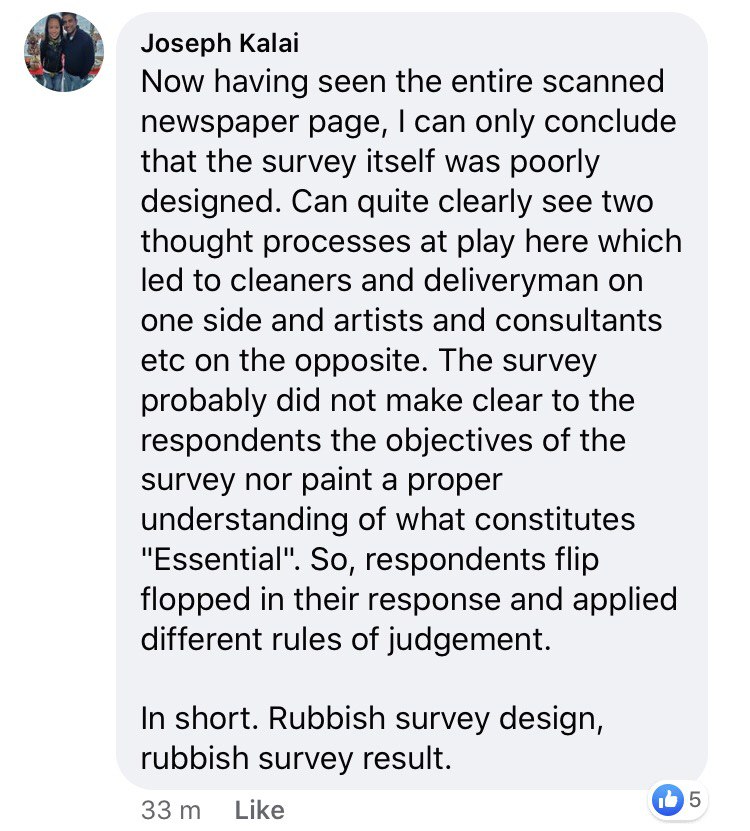 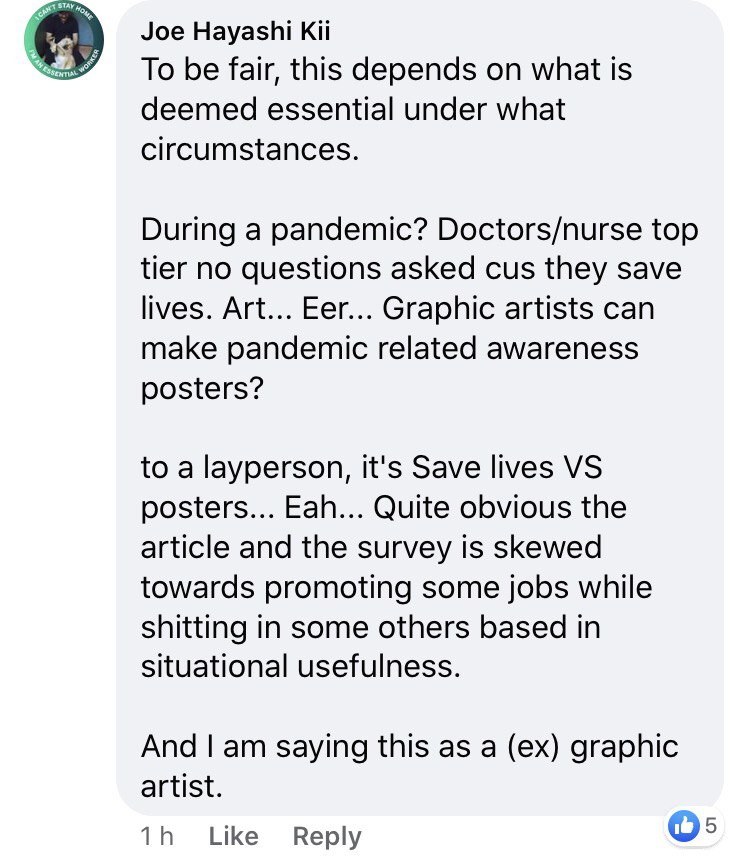 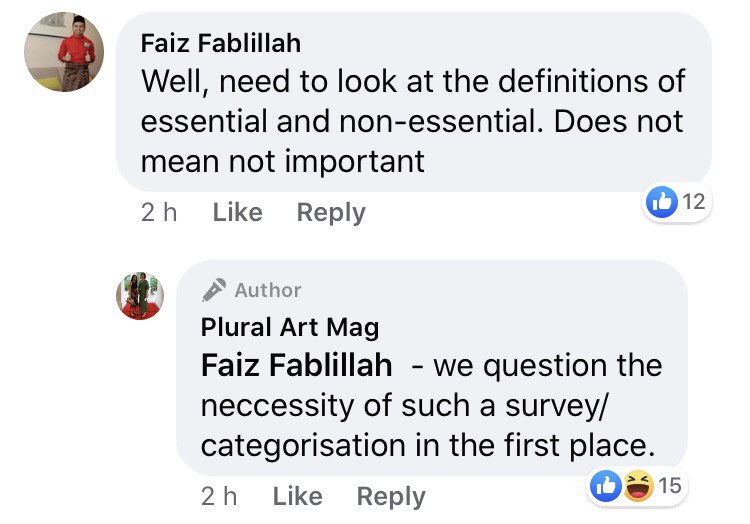 At least one artist though, disagreed with Chandran's and Rishi's stances.

He said that artists are non-essential, especially in the context of a pandemic where survival is key. 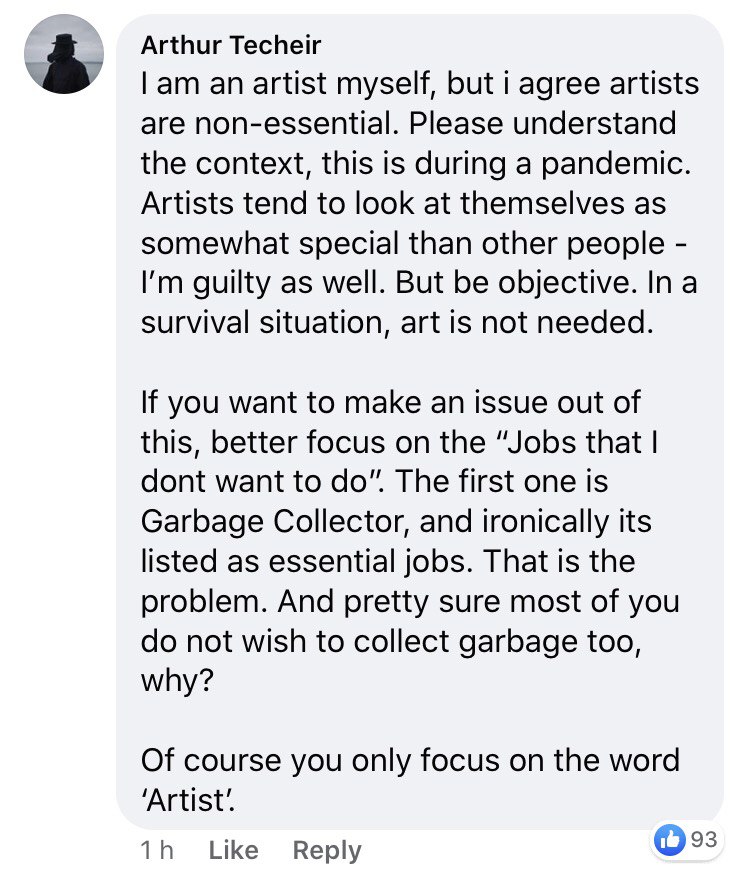