Some 70 per cent of Singaporeans and Permanent Residents cannot last longer than six months on their current savings if they were to lose their jobs now.

This was revealed in an OCBC survey of 1,000 Singaporean and PR working adults between the ages of 21 and 65 earning from S$2,000 a month.

The survey was conducted to measure the financial impact on Singaporeans during the Covid-19 global pandemic.

The survey was conducted about one-and-a-half months into the circuit breaker period in mid-May.

OCBC said the survey aimed to understand the impact of the Covid-19 crisis on residents' financial well-being.

A majority 70 per cent cannot sustain themselves for more than six months if they were to lose their job now.

Some 47 per cent have experienced a dip in income, such as through wage cuts, being forced to take no-pay leave, or a reduction in commission earnings.

Another 46 per cent are worried about losing their jobs despite extensive government support.

Some 18 per cent of them have enough savings to cover only up to one month of expenses.

About 35 per cent of respondents intend to take or have taken on a second job.

A total of 41 per cent are worried if they have enough insurance coverage, with 47 per cent of Singaporeans aged between 40 and 54 the most concerned.

Some 55 per cent of respondents said their savings had taken a hit.

About 22 per cent indicated their savings fell by more than 20 per cent.

About 19 per cent were maintaining their savings level.

But some managed to save more, with 5 per cent of the respondents saying savings had increased by more than 20 per cent.

The remaining 12 per cent said that their savings had gone up by up to 20 per cent. 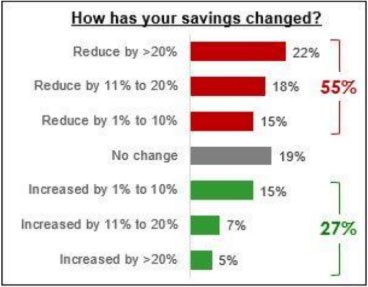 Among those who have invested, 54 per cent are worried about their portfolio, with 40 per cent saying they intend to reduce their investments.

Some 16 per cent said they will reduce by more than 20 per cent.

Some 27 per cent of those with financial plans said they have stopped setting aside or even reduced their funds for retirement.

About 32 per cent of those between the ages of 40 and 54, and many of whom must take care of both young children and aging parents, said they have cut down on such funds.

In contrast, 23 per cent of those in their 20s with a retirement plan have put aside more money for this goal during this time of uncertainty. 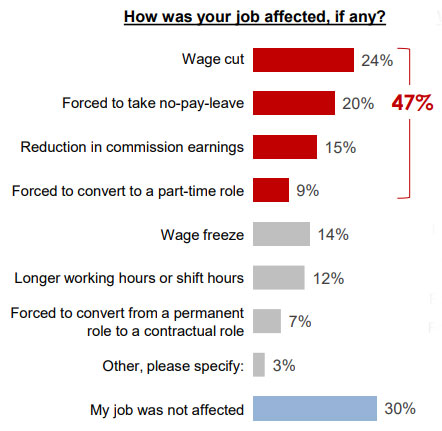 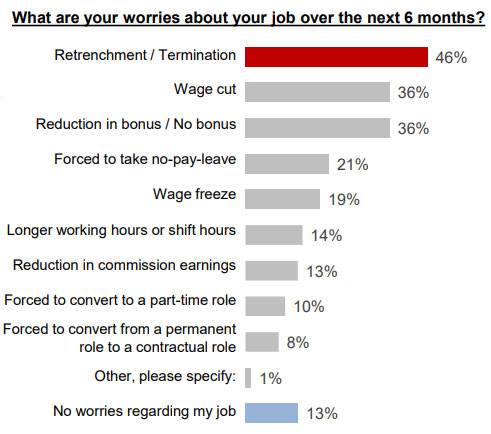